Drought dries up the Rio Negro A drought which has been described as one of the worst in 40 years has led to one of the most important tributaries of the Amazon river to fall to its lowest level in over a century.

According to a report at guardian.co.uk, the drought has caused the Rio Negro (which flows into the River Amazon) near Manaus, to fall to its lowest level since records began, dropping daily by as much as 6cm to just 13.63m.

The Solimoes and Amazonas rivers have also been badly affected.

At the time of writing this, thirty-three of the 62 municipalities in the region have declared states of emergency with the Brazilian government promising $13.5m (around £8.5m) in aid.

The drought has left thousands of people who rely on the rivers for transport and their livelihoods stranded, communities isolated, boats marooned in dry riverbeds. The receding rivers are thought to have affected around 62,000 families, particularly in the area up-river from Manaus towards the Peru and Colombia border. In one area, 15 miles out of Manaus, authorities are apparently intending to hack a small road through the rainforest in order to reach the outside world.

In another report, Rosival Dias, coordinator of the Sustainable Amazon environmental foundation, told Globo Amazonia: "People are without food because the fish are dying without water. Almost all the boats are stopped, only small boats are able to navigate."

The Rio Negro means 'black river', although the water is more tea-coloured than black. It's the largest blackwater river in the world with a length of around 2,230 km/1,390 miles. 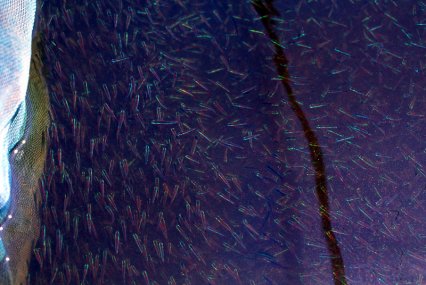 Many popular aquarium fish are found in the Rio Negro including Discus, Cardinals (pictured above, in a holding net ready for export), Rummy-nose tetras, Hockeystick pencilfish, Festive cichlids, Severum and Red-bellied piranha, to name but a few.

But what has led to the drought? Some experts think that an active hurricane season in the Atlantic may have sapped humidity from the Amazon; others think forest fires may have affected rainfall in the region and there are concerns that what we are seeing are the early effects of global warming on the climate in the Amazon region.