Did this happen in the name of research? Controversy is raging in the world of shark research after pictures of a shark with a severely mutilated jaw thought to be caused by scientists tagging it have resurfaced.

“Junior” a Great white shark was caught in October 2009 by a team from the Marine Conservation Science Institute and accidently hooked in the gill.

The shark was filmed by a National Geographic film crew as bolt cutters were pushed through its gills to remove some of the hook, tagged and released with a significant proportion of hook still attached.

Late last month leaked images were circulated of an emaciated Junior taken in 2010 with a significant proportion of his jaw injured and missing, reawakening an argument about the merits of SPOT (Smart Position or Temperature Transmitting) shark tagging which requires researchers to physically catch the shark to tag it.

Michael Domeier a marine biologist with 15 years’ experience and many successful examples of tagging fitted the tag and claims that the injuries were inflicted by another shark during aggregation.

A statement on the MCSI website says: "…it is not a result of the capture and release during tagging. White sharks annually aggregate at both Guadalupe Island and central California, and during these aggregations the sharks are very aggressive towards each other. When they attack one another they typically bite the region from the pectoral fins to the head, often damaging the gill area and head. We have many photos of sharks from Guadalupe Island with similar aggression related injuries; this is natural shark behavior..." 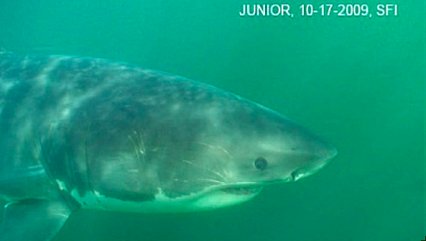 However other scientists claim that the injuries to the shark (pictured above in 2009 before the incident) are a direct result of the hook and that the MCSI team have concealed the images. Pelagic Shark Research Foundation call Domeier’s work "a huge leap backwards (overboard) for shark research conservation."

Other researchers claim that the injury is a result of an abscess indicates a circulatory problem, possibly caused by damage to the skeletal system.

No one can know what the truth of the matter is, but as a final twist in the tail, two shark researchers have come forward with claims that an established team of territorial Great white shark researchers in Northern California have strategically released the most damning of them in an effort to sabotage Domeier’s research project.