Crown of thorns starfish can be killed - with vinegar! 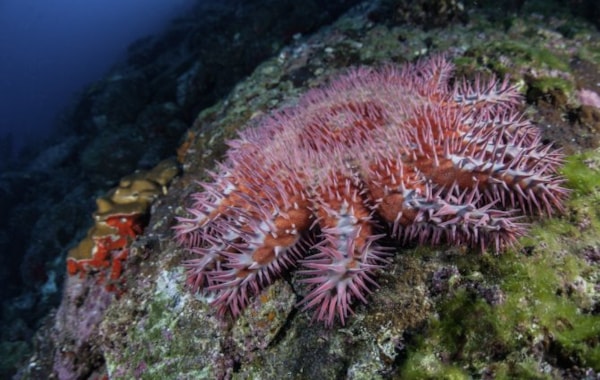 Scientists have discovered that injecting coral-eating Crown of thorns starfish with simple household vinegar kills them just as effectively as the current drug, which can be expensive and difficult to source.

Lisa Boström-Einarsson of James Cook University said the findings were exciting. "Currently divers use 10 or 12 ml of ox-bile to kill each CoTS. It’s expensive, requires permits and has to be mixed to the right concentration. We used 20 ml of vinegar, which is half the price and can be bought off the shelf at any local supermarket."
The CoTS in the JCU trial were all dead within 48 hours of being injected.
Ms Boström-Einarsson said the dead CoTS were fed on by fish in the lab trials with no ill-effect, but this needed to be backed up by large-scale field trials to be sure the process is totally safe for other marine life. "There’s no reason to think it won’t work or it’ll be dangerous, but we have to be sure," she said.
She said the findings could have big implications for developing countries without the means to acquire and use the current drugs.
Scientists say while the process may greatly help slow down the CoTS outbreak, killing the starfish individually was never going to save coral reefs by itself.
"It has been estimated there are between 4 and 12 million of the starfish on the Great Barrier Reef alone and each female produce around 65 million eggs in a single breeding season. They managed to kill around 350 000 last year with two full-time boat crews. While it would take an insane effort to cull them all that way, we know that sustained efforts can save individual reefs," Ms Boström-Einarsson said.
She said other researchers were working on population-level controls of the animal, but killing the starfish one-by-one was the only method available at the moment.
Sea trials of the vinegar method will begin by the end of the year.
Why not take out a subscription to Practical Fishkeeping magazine? See our latest subscription offer.
Don't forget PFK is also available in digital format.
Click here for more information on the iPad or iPhone version.
Alternatively, click here for details of the Android version.