Could this new species of crab be the first ‘cleaner hermit’? A tiny new species of hermit crab has been found at dive sites in the National Marine Park of the southern Caribbean island of Bonaire, and scientists wonder if it is the first fish-cleaning hermit crab to have ever been discovered

A tiny new species of hermit crab has been found at dive sites in the National Marine Park of the southern Caribbean island of Bonaire, and scientists wonder if it is the first fish-cleaning hermit crab to have ever been discovered.

The presence of this lovely but rather secretive little crab first came to light on photos taken by underwater photographer Ellen Muller, who was observing invertebrates in crevices under a large coral ledge when she inadvertently photographed it alongside a reef lobster. More of the hermit crabs appeared in photos alongside different moray eel species, where they were sharing the same crevices.

Permits were obtained for a few individuals to be collected and taken for study at the Smithsonian Institution in the USA.

The shape of the major pincer of this new species is remarkable with its shape and massive size when compared to the body. The underside of the claw of this pincer is deeply excavated, and scoop-like. The function of the pincer and claw, however, is at present unknown, although a video shows that it is used by the hermit crab to push itself while crawling along the bottom. 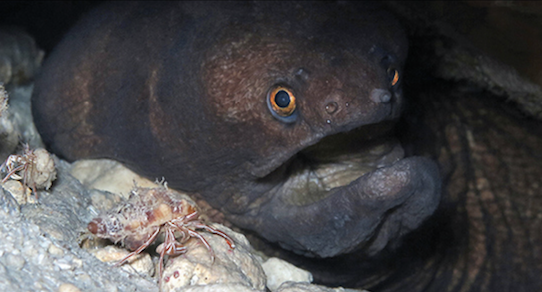 The behaviour of this new hermit crab is intriguing and scientists wonder whether it could act as a ‘cleaner’ or a ‘den commensal’ to moray eels. At least in one instance, an individual was observed crawling on the body of a Broad banded moray, perhaps feeding on mucus or other materials present on the fish. This may be evidence of some kind of symbiotic association, or den commensalism, between the two animals. The brightly coloured pattern of the hermit crab with red stripes and very long, hairy antennae are also typical of fish-cleaning crustaceans.

While some shrimp species are known to act as fish cleaners, removing parasites or fouling organisms from fishes' bodies, or undesirable food particles, a hermit crab has never been documented to engage in this type of association.

The new species is described in a paper by Dr. Rafael Lemaitre of the Smithsonian Institution, and has been given the common name of ‘Candy striped hermit crab’ due to its red and white stripes which are reminiscent of traditional candy cane. The scientific name of Pylopaguropsis mollymullerae is in honour of Ellen Muller's young granddaughter, Molly Muller. The underwater photographer believes that the honour would "inspire her to continue the tradition of protecting the amazing and fragile diversity of marine life in Bonaire."

For more information, see the paper: Lemaitre R (2017) Discovery of a new species of hermit crab of the genus Pylopaguropsis Alcock, 1905 from the Caribbean: “den commensal” or “cleaner”? (Crustacea, Anomura, Paguridae). ZooKeys 646: 139-158.