Parasitic Cookiecutter sharks seem to prefer biting chunks from Swordfish as opposed to other species.

According to the results of a study by US biologists, parasitic Cookiecutter sharks, Isistius brasiliensis, preferentially attack Swordfish, Xiphias gladius, over other pelagic fish.

The results showed that 25% of Swordfish examined had scars from previous Cookiecutter shark bites, compared to 8.3% of Opah, Lampris guttatus, and much lower numbers for other pelagic fishes.

More bites than other fish

The findings, which have just been published in the journal Environmental Biology of Fishes, also state that most fish have just one Cookiecutter shark bite per individual.

However, Swordfish, often had more than five bites each, as well as a higher proportion of healed scars from previous shark attacks.

"Based on bite scar diameter, larger Cookiecutter Sharks may preferentially attack Swordfish rather than the other species of pelagic fish." 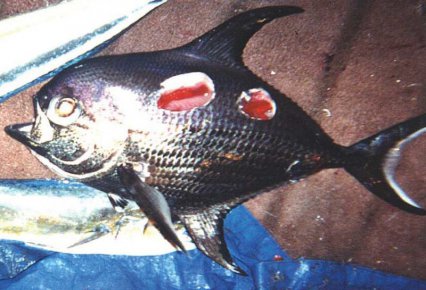 Daily migrations
Prior to the study, little was known about its feeding behaviour, but it's been reported to have taken chunks out of a range of things, including fishes, marine mammals, squid, human corpses and even inanimate objects such as submarines and undersea cables.

The Cookiecutter shark, Isistius brasiliensis, is a small dogfish-sized shark and is found in warm oceans across the globe.

The species often lives in deep waters and has been recorded as deep as 3.7km/2.3 miles down.

Every day, the Cookiecutter shark migrates vertically through the water column to feed on large pelagic fishes at night. As the sun rises in the morning, it descends into the depths.

The authors claim that their study also adds weight to the vertical migration hypothesis.

"When taken in conjunction with diving behavior of pelagic fish, and fishing depths, the results add further support to the hypothesis that Cookiecutter Sharks perform diel vertical migrations," they added.

2. Cookiecutters have a dark collar-like marking around the head, which is believed to mimic the silhouette of a fish, allowing them to creep up on potential victims.

3. Shipwreck survivors have reported small, deep, clean bites after being attacked in the water at night. Several post-mortems of human corpses have also revealed bites by Cookiecutter sharks.

4. Cookiecutter sharks are luminescent and glow green for several hours after being removed from the water. Their glowing body is believed to attract victims.