The Vancouver Aquarium in Canada has successfully bred Arctic cod in captivity â€“ a first for North America, and possibly even the world.

The aquarium hopes to put some of the young fish on display to the public in the next few weeks.

Danny Kent, curator at the Aquarium said: "We're super happy about it. The Arctic display is there to educate the public and it's more cost-effective to replace our display animals when they pass on."

The cod were bred from adults collected on four trips to the Arctic in the last three years by biologists from the Aquarium. Attempts had been made previously to breed the fish in the 80's and 90's but they were unsuccessful.

"Rearing Arctic cod is a delicate and intensive process…the larvae and eggs are extremely fragile and require meticulous and constant expert care to thrive," Kent explained. 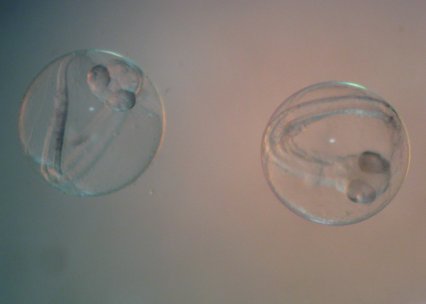 Opportunities to study Arctic cod are very rare due to remote natural habitats that are not easily accessible by research teams. This is compounded by the high cost of travelling to the Arctic and the challenges of collecting the species; moreover, the extremely challenging water temperature and water quality conditions under which they have to be kept make rearing very difficult.

Arctic cod (Boreogadus saida) live in many parts of Northern Canada, including the Beaufort Sea, the Arctic Archipelago, Hudson Bay, Baffin Bay, and along the coasts of Labrador and Newfoundland. They spend approximately nine months a year under the ice, making it difficult for scientists to collect vital information on their life cycle and basic requirements to live.

Arctic cod are a key link in the Arctic food chain. They are a primary food source for iconic species such as narwhals, belugas and ringed seals, which polar bears depend upon for their survival, and Inuit communities rely on as well. Arctic cod are also preyed upon by Arctic char, Greenland halibut, Atlantic salmon and Atlantic cod. The health of Arctic cod populations is a clear indication of the overall health of the Arctic ecosystem.

"The Arctic is one of the world’s regions where the impact of climate change is greatest," said Dr John Nightingale, president and CEO of the Vancouver Aquarium. "The ability to rear Arctic cod in a controlled setting opens the door to research that has not been feasible in the past."

Despite the importance, the scientific understanding of Arctic cod is limited. Important questions about how these fish will respond to the changing Arctic climate — temperature, salinity and pH are all changing rapidly — remain unanswered.

"Scientists are seeing increasing ocean temperatures, even in the Arctic. What we don’t know today is how this change will impact key species like the Arctic cod. Successfully rearing Arctic cod at the Aquarium means scientists can study aspects of their lives that previously were difficult, if not, impossible to study," added Dr. Nightingale.

The Vancouver Aquarium is the only aquarium in North America to have Arctic cod on display as an educational opportunity for guests. In addition to being a major tourist attraction, the Aquarium is a centre for marine research, conservation and marine animal rehabilitation.