At first glance this looks like a goldfish â€” but is it?

Angler Mark Sawyer made the freak catch while fishing at Magpie Lake, Cambridge. 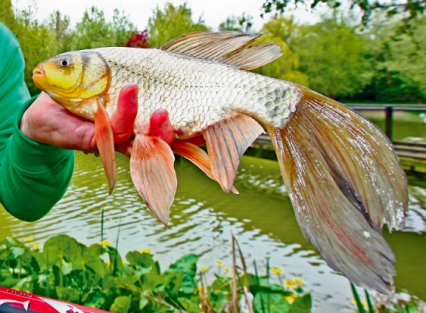 He said: "I have shown the picture to a number of marine boffins who say it is definitely the result of mixed parentage.

"I have caught thousands and thousands of fish but have never seen anything like it before. It is a proper oddity."

One expert said the fish was truly a one-off and he hadn't seen anything like it in the UK before. He said it seemed likely that a Fantail goldfish had been released into the lake at some stage, either from an aquarium or pond, where it had since bred with a Common carp. The fish that Mark caught would have been one of the offspring.

However, another expert said he thought the fish was the result of a Fantail goldfish breeding with a Common goldfish and that it had probably been released by a fishkeeper.

The unusual catch, which has been dubbed 'Frankenstein fish' by the press, was returned to the lake after the photos were taken.

What do you think the fish is? We'd be interested in your views.