Premium Japanese fish food manufacturer Hikari has contacted PFK with news that for the 9th consecutive time the winning fish was fed on a diet that included Hikari.

A 6-year-old, 84cm Showa owned by Mr Jitsuo Takagi, bred by the Dainichi Koi Farm, was crowned the All Japan Grand Champion.

Showa is the name for a non-metallic black, red and white fish, with the champion beating a Sakai Kohaku (red and white fish) to the title. The Kohaku was larger at 95cm but was not in such good condition.

The Showa was also awarded superior champion at last year's All Japan. 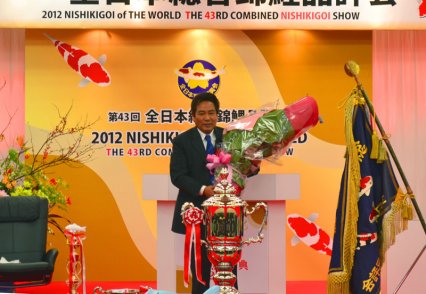 "This is the 9th consecutive All Japan Grand Champion to be raised on the world’s most technologically advanced Koi diets, extending the brands uninterrupted winning streak which began in 2003 (no show was held in 2004)." Say Hikari.

"Developed on the back of decades of first hand breeding experience and feeding trials, Saki-Hikari diets provide complete and balanced, superior nutrition, bringing out the Koi’s true potential."

"They are the only fish foods to contain Hikari-Germ, a strain of Bacillus bacteria which aids digestion, helps optimise nutrient utilisation resulting in less waste and excellent water quality as well as supporting the Koi’s own good bacteria.