It's true! Aqua Design Amano, the company of globally renowned aquascaper Takashi Amano is to produce its own range of ultra sleek LEDs.

Cited for release in June 2012, the two initial models are designed to be compatible with the Cube Garden or Cube Glass ADA aquaria, in either 30 or 36cm lengths.

The units have a power consumption of 17W, which for a 30cm tank is rather poky, to say the least. This consumption is spread out to supply 30 individual LEDs of 0.4W each, purportedly arranged in clusters. 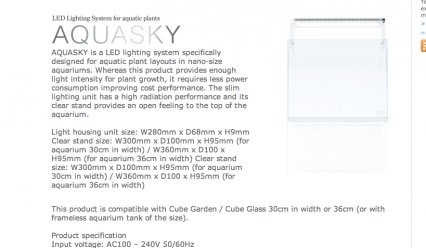 The colour temperature range is between 7,000 and 8,000K, making the first ADA LED a little whiter than this author would have expected.

The design itself looks typically ADA, that is to say gorgeous. Ultra slim in design with a clear stand (which has yet to be certified as legal for use in the UK, where laws involving lighting brackets are quite tight), the light claims to be able to support growth in undergrowth plants, as well as ‘encouraging photosynthesis with its high luminosity.

Watch this space for more ADA news as it emerges.