A seahorse's tail is its armour The tail of a seahorse is its lifeline - not only does it allow the animal to anchor itself to corals or seaweed and hide from predators, but the tail also forms its armour.

Engineers at the Jacobs School of Engineering at the University of California, San Diego, have been studying different animals to see how they protect themselves.

They found that the tail of a seahorse can be compressed to about half its size before permanent damage occurs. This exceptional flexibility is due to its structure, made up of bony, armored plates, which slide past each other.

Most of the seahorse’s predators, including sea turtles, crabs and birds, capture the animals by crushing them. Researchers wanted to see if the plates in the tail act as an armour. They took segments from dead seahorses’ tails* and compressed them from different angles.

They found that the tail could be compressed by nearly 50% of its original width before permanent damage occurred. That’s because the connective tissue between the tail’s bony plates and the tail muscles bore most of the load from the displacement. Even when the tail was compressed by as much as 60%, the seahorse’s spinal column was protected from permanent damage.

The seahorses's bony plates were found to be only about 40% mineral (compared to 65% in the bones of a cow). The rest of the plates are made up of organic compounds and water, so they don't shatter under severe compression. The hardness of the plates varied. The ridges were hardest, likely for impact protection - about 40% harder than the plate’s grooves, which are porous and absorb energy from impacts.

The seahorse’s tail is typically made up of 36 square-like segments, each composed of four L-shaped corner plates that progressively decrease in size along the length of the tail. Plates are free to glide or pivot. Gliding joints allow the bony plates to glide past one another. Pivoting joints are similar to a ball-and-socket joint, with three degrees of rotational freedom. The plates are connected to the vertebrae by thick collagen layers of connective tissue. The joints between plates and vertebrae are extremely flexible with nearly 6° of freedom. 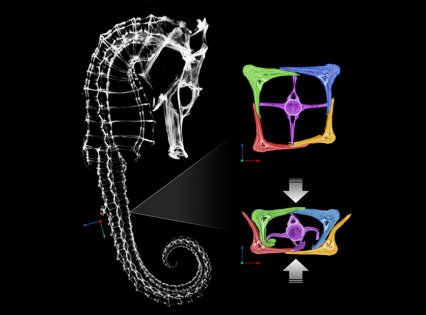 Researchers are hoping to use their findings to create a flexible robotic arm equipped with muscles made out of polymer, which could be used in medical devices, underwater exploration and unmanned bomb detection and detonation.

* The seahorses in the experiment weren't killed for its purpose. The animals used had died during transport from Indonesia to join the aquarium at the Scripps Institute of Oceanography nearby.