The work includes a re-design of the 200,000 U.S. gal./760,000 l. tank's signature Caribbean coral reef and the development of two new complementary exhibits.

The new, four storey reef is home to more than 2000 aquatic animals, double the number before the renovation. There are now 140 different species, making it among the most bio-diverse in the world. Among the newcomers to the exhibit are Blacknose sharks, Scrawled filefish, Midnight parrotfish, trumpetfish, guitarfish and Yellow goatfish.

There are thousands of newly installed, corals in the display. The artistry in re-developing the giant coral reef came from Peter Brady, the Aquarium’s renowned designer and his team, who spent many months working in a warehouse studio in nearby Charlestown. They made 1,500 smaller pieces of vibrant fire, brain, lettuce, and star corals, many pieces cast from moulds of real corals, which were then filled with coloured acrylic matching the astounding colours of a vibrant, healthy Caribbean coral reef. The pieces are so accurate, it's hard to tell they aren't real.

You can go on a tour inside the tank in an underwater video. 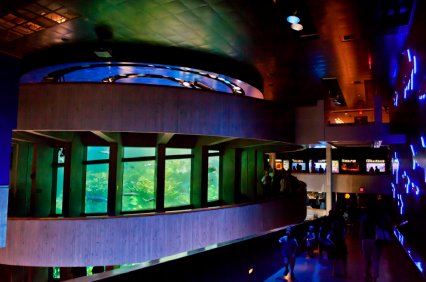 Other changes for the tank include new windows using a super clear acrylic that varies in thickness from 2-3" and the bottoms of the windows have been lowered to allow toddlers to see into the tank better.

The top of the tank has been transformed with many new features and is now called the Yawkey Coral Reef Centre. It includes a new, seven tank exhibit gallery and offers a close-up look at animals that might not be easily seen or understood on the reef. 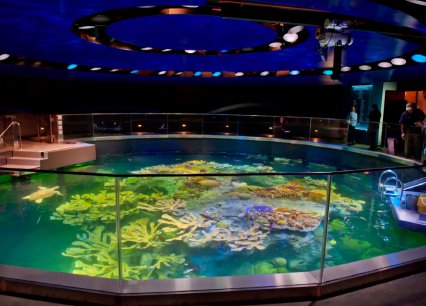 The entire circumference of the tank top is enclosed by a glass railing that maximises everyone’s view of many of the predators swimming high in the water column. Visitors can now easily recognise creatures resting on the tank’s bottom more than 24' below. Viewing is enhanced by a theatrical quality lighting system built into a beautiful, blue, reflective ceiling dome that helps to create a greater underwater ambience throughout the space.

An additional exhibit has been opened on the Aquarium’s first floor called the Blue Planet Action Centre, telling the stories of the Aquarium’s extensive marine conservation and research efforts around the world. The space also includes a lobster lab and a shark nursery with live shark egg cases where the embryos can be seen moving.