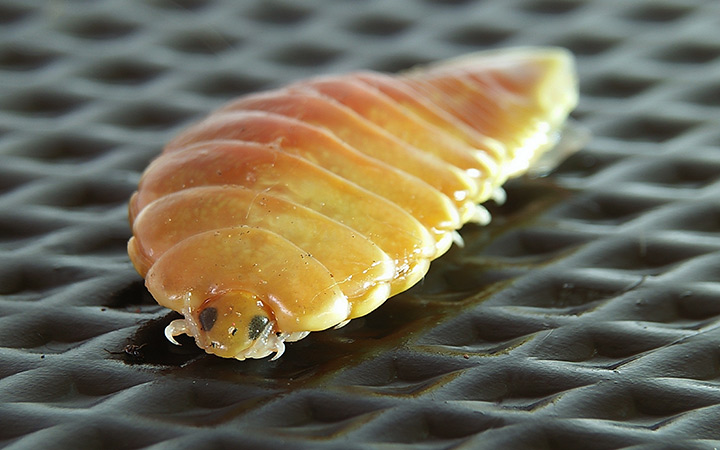 Biologically more complex than viruses, fungi or bacteria, parasites make up a considerable chunk of the infectious disease problems in fish. Parasites frequently arrive in to a tank via the addition of new fish. Unlike bacteria and fungus, many parasite outbreaks are primary infections that may not require fish to be stressed to take hold.

Endoparasites are those that live inside the fish and may be hard to diagnose. Ectoparasites live on the outside of the fish, and can range from single celled organisms that require a microscope to diagnose, to huge crustaceans that you can see holding on to the fish.

Parasites can have complex life cycles, and some even have multiple hosts at different stages of their lives. Because of these, treatment may require multiple doses of medication and may be a slow process. 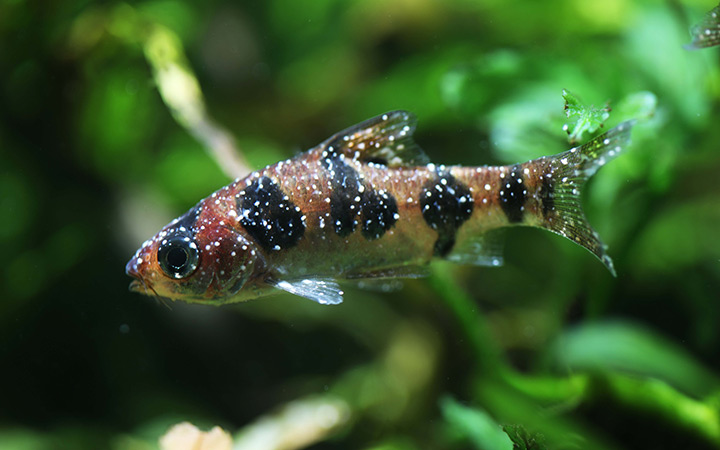 White spot or ich is probably the most common fish disease and is caused by the protozoan Ichthyopthirius multifilis. Stress appears to be a major trigger for outbreaks. Ammonia and nitrite poisoning in particular causes outbreaks. Scaleless (sometimes called naked fish) and small-scaled fish are more prone to infestations. Sudden drops in temperature act as a trigger. White spot usually occurs soon after new fish are added to a tank, one of which is carrying the pathogen. Fish that have been exposed to whitespot in the past may develop immunity to some strains, meaning that not all fish in a tank become infected.

Treatment: off-the-shelf medication (usually malachite green, methylene blue, formalin or copper sulphate based). NOTE: Some fish are reportedly susceptible to whitespot medication. Always read instructions before dosing. 3g/l salt will help. The parasite’s life cycle involves several stages, of which only one will respond to treatment. 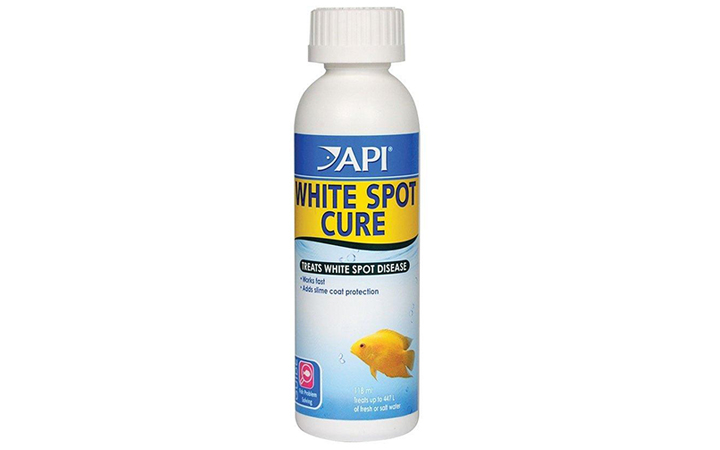 On the fish, the trophont (the feeding, parasitic stage) is beneath the fish’s skin and cannot be treated. When mature, the parasite leaves the fish and falls to the substrate (leaving wounds susceptible to secondary fungal or bacterial infections). On the substrate, the spot becomes a tomont, and begins to divide into up to 2000 new white spot protozoans. The spot then releases theronts in to the water. The theront is the stage of the life cycle where the white spot looks for a host, and it is this stage that responds to treatment.

Because medicine will only treat the theront stage, repeated doses of medicine are needed. Even if the fish looks free of spots, tomonts in the substrate will be producing more theronts. Daily gravel cleaning during a white spot infestation will help to remove the dividing cysts on the substrate. Increasing the temperature (where possible) by a couple of degrees centigrade will speed up the life cycle, making treatment faster. 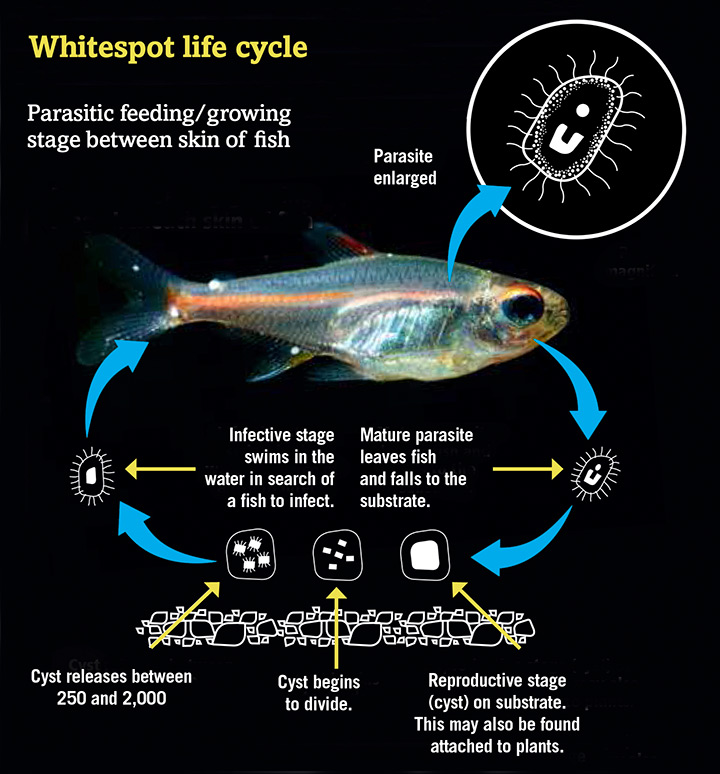 Guppy disease — caused by the protozoan Tetrahymena. Mainly affects guppies, but can manifest on other species, like Angelfish and Betta. Transmits directly from fish to fish, through water.

Signs: listlessness, rapid breathing, difficulty swimming, erosion of the fins or body. Unlike fun rot, the tail will disintegrate along with rays and spines. Bright colours may turn white at affected areas. Spread is fast, and mortalities happen quickly. Scales may appear ‘lifted’ from the body. 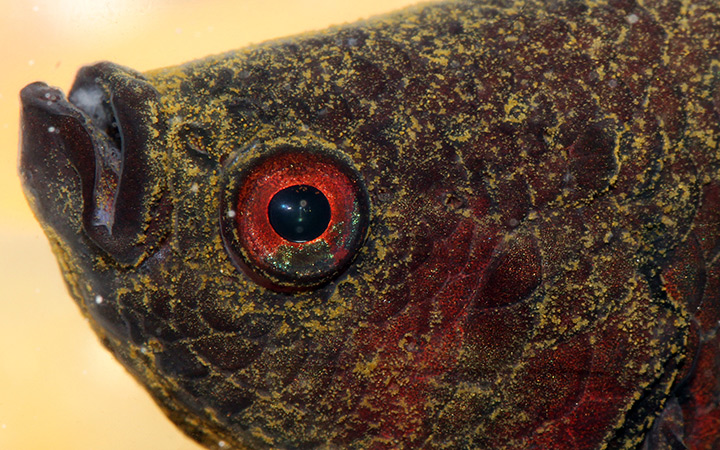 Velvet disease is caused by the protozoan Piscinoodinium. Poor water quality may be a factor in infections. Introduced on infected fish, but also transported on contaminated nets, plants and décor. The disease is a particular problem in fry.

Signs: a ‘dusting’ of gold all over the fins and body, excess mucus production, lethargy, rapid breathing, flicking and scratching, and loss of balance. Scales may appear ‘lifted’ from the body. Can be difficult to see on some fish.

Treatment: turn aquarium lights off (Piscinoodinium derives some of its energy from photosynthesis) and medicate with a course of off the shelf anti-parasite treatment (malachite green, methylene blue, formalin or copper sulphate based). 3 to 5g/l salt will help. Velvet disease has a complex life cycle, and treatment should last at least seven days to catch any released spores. 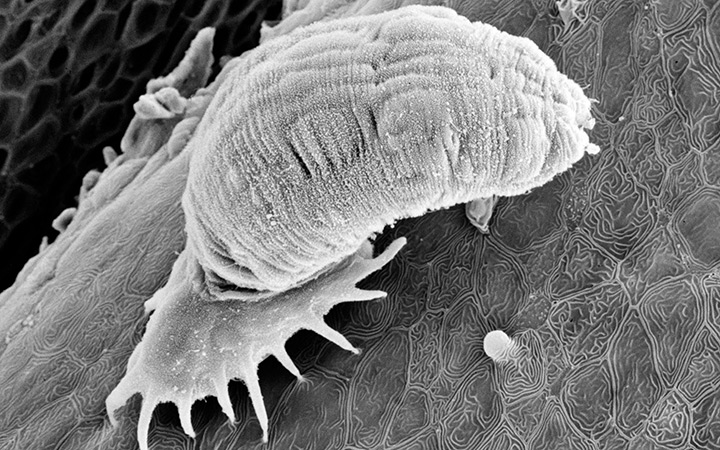 Slime disease is caused by one (or more) of several microscopic parasites, including Trichodina, Chilodinella, Ichthyobodo and Gyrodactylus. Slime disease is usually transmitted via fish touching each other, or sometimes through water. Poor water quality and overcrowding is a factor, as these parasites may be present at unnoticeable levels in even the healthiest aquarium.

Signs: flicking and scratching in the early stages, a grey or white sheen to the body as mucus is produced to excess. Fish eventually look slimy, with mucus sloughing off. Fin erosion, rapid breathing and secondary ulcers possible in advanced cases.

Treatment: correct diagnosis requires a skin scrape — mucus is taken from the fish and looked at under a microscope, indicating both the type and extent of the infection. Infections of Trichodina, Chilodinella and Ichthyobodo may be treated with off the shelf medications (copper and formalin based). Treatment is often a single dose, followed by a follow up second dose after one week if the first fails. Infections of Gyrodactylus require treatments containing Levamisole or Praziquantel. Avoid using salt, which increases mucus production.

Camallanus is caused by the nematode worm Camallanus cotti. It can be introduced in live foods, but is also transmitted when fish eat the infected faeces of other fish. Wild caught fish that haven’t been quarantined properly are frequent carriers.

Signs: emaciation, but the disease is most obvious as thin, red worms protruding from the anus of an infected fish.

Treatment: medicated food (using fenbendazole wormer) or dosing of the aquarium with levamisole, found in a couple of off the shelf medicines. Regular gravel cleaning during an infection will help remove contaminated faeces. 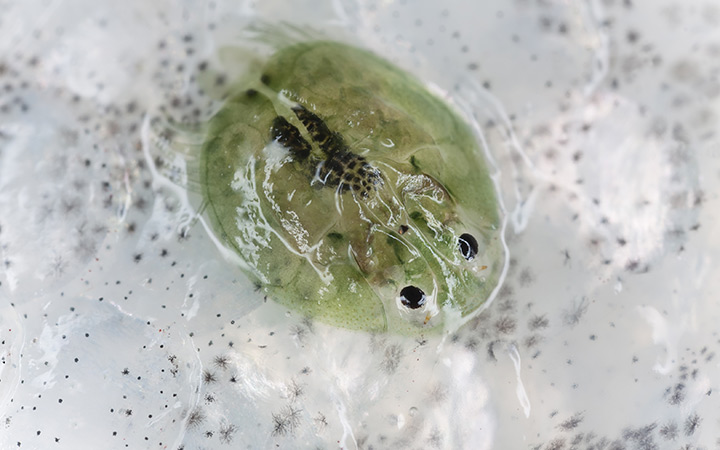 Fish louse is caused by Argulus crustaceans. Transmission is direct, from fish to fish, or from eggs that the Argulus lay in the tank that hatch into tiny larvae. Argulus only attach to a host to feed, then drop off and reproduce. Only female Argulus attack fish. Introduced to aquaria via infected fish, or through contaminated nets and decoration.

Signs: plain to see with the naked eye as a large 5 to 10mm green disc that clings to the fish’s body. Fish that have been affected may have puncture wound injuries and secondary infections.

Treatment: directly remove the adult parasites with tweezers in a heavy infestation, and follow up with a course of insecticidal treatment such as Diflubenzuron (found in some off the shelf treatments). Also, remove any eggs, visible as white ‘strands’ on rocks and glass. Antibacterial treatments may be needed for secondary infections. 3g/l salt will help with any osmotic difficulties caused by the open wounds the Argulus leave. 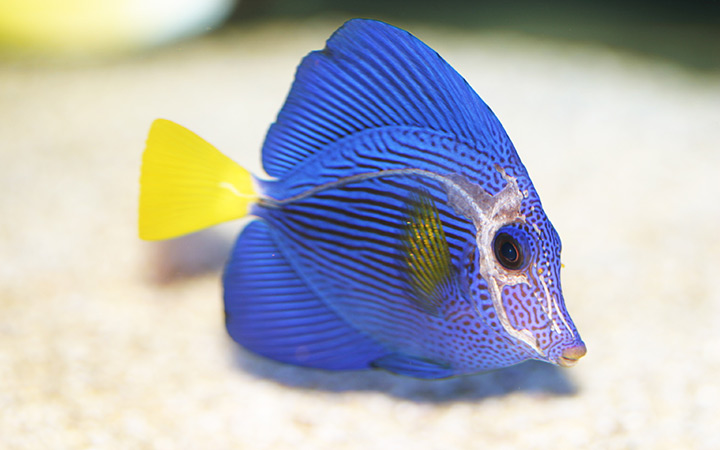 Hole in the head is an illness found mainly within cichlids, and can be either a parasitic infestation of Spironucleus, Octomitus and Hexamita, or a symptom caused by an unknown cause. Poor water quality can be a factor, as can poor diet and stray voltage. Secondary bacteria may be involved. Exact mechanism of the illness not well understood. The parasite primarily infects the gut of the affected fish.

Signs: white ‘pits’ in the head that may expand down the fish’s lateral line. They may even exude white slime. Faeces may turn white, fish become emaciated and refuse to feed.

Treatment: requires metronidazole which needs to be obtained under prescription. Some off the shelf medicines may have some effect in the early stages of infection.

Click here for next lesson: Diseases with multiple causes