What’s got under the skin of my Rams? 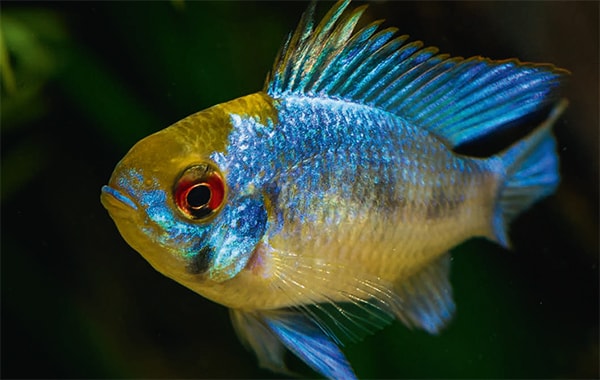 One PFK reader has a problem with his blue Rams developing a fungal infection. Dave Hulse shares his opinion...

Q) I seem to have a problem with the blue Rams in my tank. They have been developing what looks like hole in the head which for some has now evolved into what appears to be some kind of fungal infection. I can see things that look like white worms visible under the skin of the fish. But the worms aren’t moving, hence my suspicion that it could be fungal rather than a parasite. The fish are in a mature, heavily planted 200 l community tank with some tetras and a pair of Bolivian rams, none of which have displayed the same symptoms, and the Bolivians even spawn occasionally. I carry out water changes twice per week, and water parameters are stable with ammonia and nitrite both at 0, nitrates 25 ppm, pH7, KH2, GH7, phosphates 0.05 mg/l, CO2 25ppm. The temperature is 28°C. I have tried using a general cure to deal with the hole in the head, but it hasn’t had any noticeable effect. Please could you help?

A) DAVE HULSE REPLIES: This seems very similar to a problem I encountered in Rams many years ago. There are several species of nematode that can live just under the skin of the fish; cyprinid fish in this country can occasionally be seen with a red round worm parasites of the genus Philometra or Philometroides, just under their fin epidermis, (upper skin layer).

The worms at the skin surface are the females, once ready to breed, they break out of the fish’s skin and release their young into the water. The worms I encountered previously were dissected out and identified as nematodes, though the genus or species was never determined. Hence your description of round worms under the skin, while uncommon, is not impossible and has been met in this species of fish before.

Fish carrying these nematodes appear otherwise reasonably healthy. The safety of your other fish depends on the life cycle of the worm. If an intermediate host is involved, which is absent from your tank, then the tankmates are safe. However, if the life cycle does not require an intermediate host, and the larvae can infect fish, then this is not so good. Isolation of the affected fish, until you know more is the best policy.

Occasionally, gut-dwelling nematodes can find themselves in the wrong host, so they go on a tour around the animal trying to find a suitable infection site or a route of exit. It is possible this is also the case with your fish, and with those I encountered previously.

I think fungal infection is unlikely, as most fungi infecting fishes are saprotrophs – they feed on dead and decaying tissue. So the fish will be really very ill if they are infected with a skin fungus. Also, the classic cottonwool like appearance is unmistakable, as the mat of fungal growth, (called a mycelium), becomes buoyant in the water, giving the fish a fluffy-like covering over the affected area.

The hole-in-the-head you report is often seen in cichlids and marine fishes when there is some subtle underlying stressor. Several factors such as nitrates, gut flagellates and poor nutrition have all been implicated. Isolate and monitor the affected fish, and perhaps also have a polite word with the retailer, just to see whether other customers have reported a similar issue in the same batch of fish.