Should I buy the cheaper catfish? Bob Mehen has some advice for a reader who's trying to decide between two differently-priced, but similar-looking fish.

Q. I’ve been looking for a couple of suitable catfish for my 350 l/77 gal tank and I’ve decided I’d like to try Synodontis. This is partly because I’ve never kept them before and partly because I understand they come from Africa, which is where the Congo tetra I have in the tank already are from.

Looking around my local shops, I noticed some lovely looking fish labelled 'Clown syno, S. decora' at £35 each, as well as some similar looking but much cheaper fish labelled 'Zebra syno' at just £10 each.

Is there any difference between the two fish, and if so, which would you recommend I buy?

A. Synodontis are making a welcome comeback to the hobby, having fallen out of fishkeeping fashion in the last 20 years with the rise in popularity of'L' number catfish. However, one of the reasons for their fall from favour was the appearance of man-made hybrids, and sadly, there still seems to be a ready market for these.

The Clown syno you mention was hopefully the lovely Synodontis decorus (or at least that was the name the scientific community had settled on last time I looked), a wonderful fish with beautiful black spot and stripe markings and fin extensions when adult. They are one of the larger species and grow to around 25cm/10in, so they may be a tight fit for your tank when mature.

The 'Zebra syno' is almost certainly a hybrid, which is why its price will be so much lower. While these hybrids are often very attractive looking, their unknown origins make them hard to predict long-term, which can be a worry as many Synodontis are easily capable of living in excess of 20 years. What your bright, spotty bargain will look like in five years is a mystery, and it may turn into a large, dull grey brute thanks to 'hybrid vigour'. 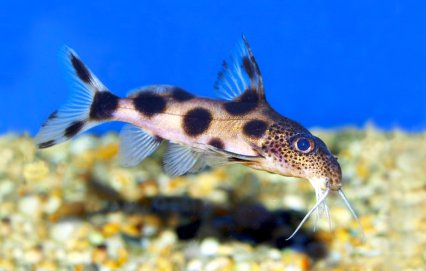 Most of the fish I have seen sold under the 'Zebra' name appear to have S. decorus as one of their parents, but their copper-coloured eyes suggest that the other parent might be a Rift Lake Synodontis such as S. multipunctatus. These fish come from hard, alkaline conditions that are totally different to the often soft, acidic conditions preferred by riverine species like S. decorus. Who knows what water chemistry the hybrid progeny of these two will do best in?

Personally, I’d recommend you steer clear of any fish that is not clearly identifiable as a true species. My recommendation would be a small group of the lovely Pyjama catfish, Synodontis flavitaeniatus, which is a smaller, more sociable fish that would be ideally suited to the size of your tank.