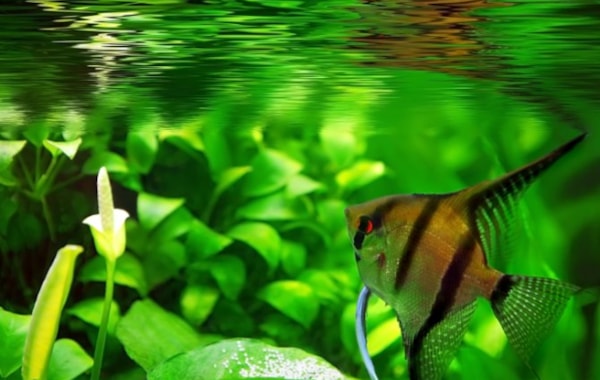 Neale Monks offers some advice to a reader with partner-swapping angels.

Neale Monks offers some advice to a reader with partner-swapping angels.

Q. I have been keeping fish for some 20 years and never come across what appears to be angelfish swapping partners to breed — until now.

I purchased six to eight juveniles some nine months ago, grew them to a decent size and let them pair off in the normal way. I got them down to two pairs, as one pair had already laid eggs, and I like to have them shoaling together when not breeding.

I noticed the male of the usual spawning pair fighting with another angel — nothing too harsh, more squaring up and the usual twitching.

Then next day it appeared he had been chased from his mate. The other angelfish has since spawned with her and was defending the spawning site which is a large Anubias leaf.

I observed them laying and fertilising the eggs and can easily tell them apart, specifically the shape of the male’s heads and stripes.

The next day the original male was back with the female and guarding the eggs that had been fertilised by the other male. Is this normal?

Is my tank really big enough for these fish? The tank has two external Eheim filters along with UV and I perform a 20% water change once per week, although not when any eggs are laid.

In reality this isn’t the case and experimental work reported by Cacho, Yamamoto and Chellappa in a 2007 paper revealed that, given the opportunity, angelfish would swap partners.

Specifically, females would drive away males they saw as inferior to other males available and males would leave the female they were with if able to mate with another female.

It’s usual among animals for females to try and mate with the best male around, while males try to mate with as many females as they can — and that’s precisely what these biologists found when looking at angelfish.

So it sounds as if your female started by rejecting her first male partner and then went on to mate with another. What happened after that is confusing and it’s unlikely any of your fish can remember who mated with who by this point!

Eventually stable pairs should form for a while and you’ll get a few broods from them, but if one or other partner feels he or she will produce better offspring with another partner don’t be surprised to see even more swapping take place.

Farmed angelfish don’t need great space because they tend to be smaller than wild angels, so around 115 l/25 gal for a pair and 250 l/55 gal for a group of six works well.

However, mated pairs will claim territories up to 30cm/12” in radius around the spawning site and that can become the limiting factor if all your fish start breeding at once.

Lots of tall objects, like bogwood roots, are useful for creating territories and breaking up lines of sight. Your tank is about 12 cubic feet, or 340 l/75 gal in capacity, so should be fine but, as ever, note water quality and observe the fish for signs of physical damage if you think they might start fighting.

Angels can be astonishingly aggressive during spawning — far more so than many believe.