Can I add more rainbows? 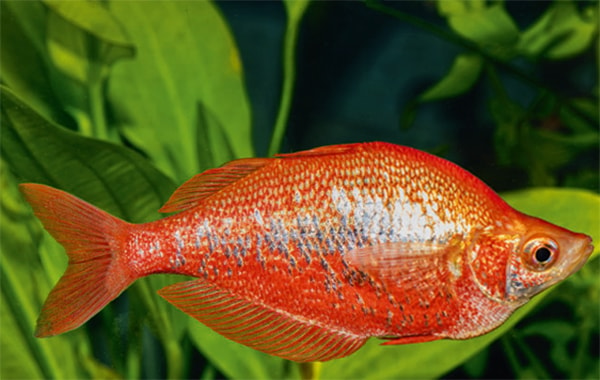 Neale Monks offers his advice to a PFK reader who would like to add a third rainbow species to their tank.

Q) I have a mature 450 l community tankcontaining both Red and Boeseman’s rainbowfish along with Harlequin rasboras, Lemon tetras, corys, Kubotai loaches and a very well-behaved Red-tailed black shark. I’d like to add a third rainbow species to this tank and I wondered what you would suggest.

I really like the Blue rainbow, but the Boeseman’s spawn regularly. Most of the eggs are eaten immediately, but should I be looking at something from a different genus to Glossolepis or Melanotaenia to avoid any risk of hybridisation?

The tank is heavily filtered and contains lots of plants, mainly Java fern. The water is moderately hard, pH is 7.6; temperature 24.5°C.

A) NEALE MONKS RESPONDS: If the eggs are mostly eaten, and you’re making no attempt to remove eggs or fry and rear them yourself, it hardly matters which rainbowfish species you include in your tank. Most species get along with each other provided they’re of similar enough size and kept in reasonable numbers. Choosing species from different genera does tend to minimise inter-species aggression, but in all fairness, genera are human constructs and don’t mean a whole lot to the animals themselves!

I’ve seen male rainbowfish and mollies duke it out, I think because both have a slab-sided shape and flare their fins when being aggressive. No real harm came to either species, and watching them interact was quite entertaining, but the main lesson here is that fish react to things like shape and colouration rather than scientific ideas about taxonomy.

Keeping multiple species of rainbowfish is fine, but as ever with schooling fish, keep at least six of each species, and the more of each you keep, the better behaved they will be.

Another useful tip is to outnumber males with females, partly to reduce aggression between males, but also because the males tend to develop the best colours when they have plenty of females to impress. Big rainbowfish will sometimes pester smaller species, so I’m not a big fan of placing the dwarf species in with the bigger ones, but in a nice large tank like yours, with plenty of plants to break up lines of sight, you should be able to mix most of the larger (12-15cm long) species without any particular problems.

Since rainbowfish fry are quite small and require suitably sized live foods, there’s little to no chance that they will survive in a community tank. If you want baby rainbowfish, you really need to spawn them in a breeding tank, and then rear them on live foods including, initially, infusoria.