Are these loaches hiding? 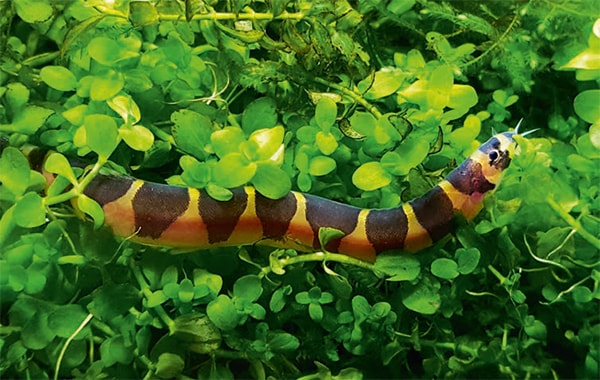 One reader hasn't seen his five Kuhli loaches since the first day he added them to this tank, and wants to know if there's any way he can tempt them out. Bob Mehen advises...

Q) I have a 90x38x38cm tank with a sandy substrate. I have real plants in the form of Java fern and Anubias tied to bogwood and a few plastic plants in the substrate. At the moment the tank is home to a short-finned Fighter, 12 Rummy nose tetras and six Lemon tetras. A couple of weeks back I added five Kuhli loaches. Apart from two occasions shortly after feeding time, when I spotted a couple nosing around, I haven’t seen any of them since the first day. I think they have buried into the substrate as I’ve been told they tend to do that. I don’t think they have died as the water quality has stayed fine: I check once a week. Is there any way I can tempt them out? Would adding a few more help?

A) BOB MEHEN SAYS: Kuhli loaches, Pangio sp., are wonderful little fish but, as you have noticed, they can be incredibly shy and secretive.

The best way of seeing the most of them is by stocking them in larger numbers of ten or more, and by providing them with plenty of cover as they can be easily spooked, especially by sudden movement, as their eyesight is relatively poor. I keep them myself and my original six were seldom seen, but now I have a group of 16 they are out and about almost constantly, especially if I add some food!

Offering occasional treats such as frozen bloodworm sends them into a wiggling frenzy of activity.

But a word of warning regarding their escapology credentials. These little loaches can wriggle their way right out of tanks which don’t have well fitted covers, which is clearly a one-way trip.

Small Kuhli loaches are more than capable of swimming into many external and internal filters, sometimes with fatal consequences, so check frequently.