In a rat race where ever-increasingly complex set-ups are the norm, one reader at least can boast a successful tank with a real "back to basics" approach.

Go to any marine-based blog or forum, and you’ll probably be left shell-shocked by the latest high-end, all-singing all-dancing equipment. It’s not an exaggeration to say that R and D in the lucrative field of seawater aquaria is taken more seriously than the freshwater hobby. Shop around and you can find a dozen different — and often expensive — approaches to keeping the 'perfect' marine tank, from those that lack sodium chloride, to those with more gadgetry than the International Space Station. It doesn’t matter just how esoteric you like your gear, someone out there will have a product to cater for you...

Alas, such tanks will usually require deep wallets, a firm grounding in the underlying scientific principles that prop them, and scrupulous management regimes.

Still, some of us are too busy for that, and might not have money leaking from every pore. Does that mean we need to experience substandard tanks? One marine aquarist thinks not.

Meet 27-year-old Lee Colbert of Bognor, a man with a set up that’s simple yet stunning.

"I got into the hobby from keeping freshwater fish in my teens," he says. "I would often go to the marine section of a fish shop and dream of keeping them but was always put off by people saying how difficult it was. I decided to ignore that and finally set up a fish only marine aquarium.

"It’s not difficult, as long as you keep on top of the chemistry and water changes. It soon becomes second nature.

"Eventually, I sold my freshwater tank before I left home and it had been a few years without fish in my life so I decided to do another, fish-only aquarium. That was all doing great until some star polyps started to grow on my rock, and I felt responsible for keeping them alive.

"Before that, I’d been planning on buying angelfish and butterfly fish, but instead I decided to try and make a go of a reef aquarium. I never thought I was capable of doing one, but the successful outcome speaks for itself.

"I’d describe it as alive and colourful, but it’s still a young environment." 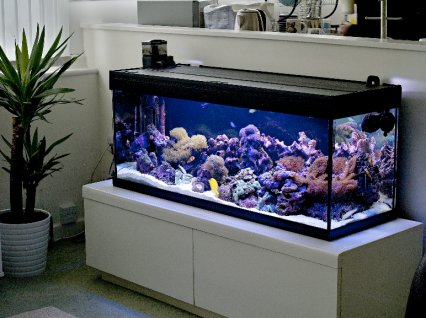 Lee’s tank is a 240 l/53 gal, 120cm/48in long glass construct, with the simplest of equipment. Filtration is an external canister filter — a TetraTec EX1200 with standard media — while protein skimming is dealt with via a TMC Compact 300 skimmer.

Lighting is as simple as fluorescent tubes, with just two 39W T5s running — marine white and actinic. Aside from a heater and a couple of flow pumps, that’s it for the hardware.

What were the challenges of setting up? "Research!" Lee tells me. "Because I had such basic equipment, there were a lot of fish and corals I’d have liked, but couldn’t keep because I don’t think my lighting and filtration would have been adequate.

"My trachys (Trachyphyllia) and lobos (Lobophyllia) lacked good lighting so I substituted that with regular good feeding and weekly water testing to keep on top of my parameters and they flourished.

"Fish shops and friends who keep the same corals couldn’t understand how that was possible, especially when they struggled to keep their own with better equipment than mine.

"Doing this aquarium on a small budget was a challenge but it’s do-able. Unfortunately, that also ruled the tank out for keeping any SPS corals." 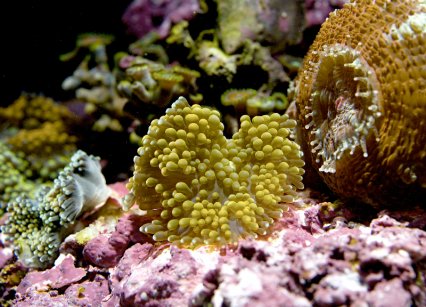 Despite the challenge, Lee’s getting as much out of his tank as keepers of much more exotic systems.

"The rewards have definitely involved watching it grow. A lot of the corals here have grown from nothing. The star polyps, button polyps, fuzzy mushrooms, and green doughnut all grew from nowhere and spread naturally.

"Obviously, it’s nice to show off, too. People come to visit and love to sit by the tank. My daughter loves to watch it too."

Lee has a good spread of corals in his low-tech rig. Among them you’ll see Briareum sp. star polyps, blue clove polyps, furry mushrooms, button polyps, water melon mushrooms, and some of his favourites: Ricordea. Lee keeps a couple of types: Ricordea floridae, and R. yuma, but as misfortune has it, one of them decided to sulk as I got to work with a camera.

Then there are the hard corals, of which Lee has no less that two Scolymia (including the one unintentional specimen that just grew itself), as well as red and rainbow species of Lobophyllia, a branching green torch, and a branching ultra hammer. 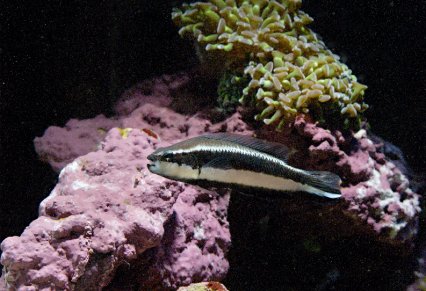 Everything thrives without the need for reactors, boosters, major supplementation or any of the other trappings of a typical marine tank.

In fact, aside the D and D H2Ocean salt mix used for water changes, the only chemicals Lee adds are periodic doses of TMC’s Triple Buffer, and the Fluval Sea 3ions supplement. Given the 18-month running time of the set up, it’s pretty safe to say these products have proved their worth.

Keeping on top of things inside, he has an illustrious clean-up crew. Though some aquarists don’t get on with a crab-and-snail medley, Lee gets on just fine, and patrolling the rocks and base is a fleet of workers made up of two emerald crabs, a gorilla (sometimes called teddy bear) crab, three snorkel snails (Nassarius), nine turbo snails, two money cowries, two peppermint and two cleaner shrimp, and no less than 30 Stomatella snails. For a tank of that size, the cleaners make up a large chunk of the stocking density. 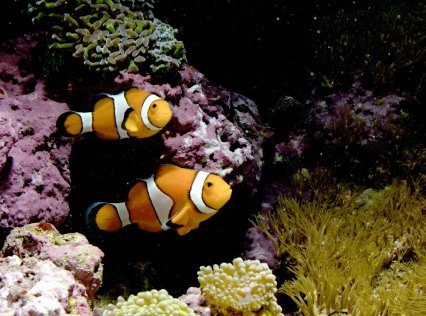 Bringing movement is a simple but effective array of fish. At one end, a pair of Common clownfish monopolise caves and rock, systematically shunting nearby corals about. Along the length swims a single Yellow tang, periodically interacting with Lee’s cleaner wrasse, while two Orange-spot chalk gobies — a breeding pair — comb the base like little ploughs. Higher up, six Blue chromis provide some movement, while a mysterious Minstrel dottyback periodically pokes his face from a crevice like a lost spelunker. At one stage, there was also a Midas blenny and a Sixline wrasse, but they’d been traded in by the time I arrived.

"The fish I’ll never try to keep is the Regal tang," Lee says, "because they’re just so very greedy, shooting around at feeding time and stopping others getting a good snack. Plus, they grow too fast, they’re forever stressed, and they pick up whitespot way too easily.

"I’d never try a Royal gramma again, either,” he continues.  “As beautiful as they are they hide a lot. I found mine would suffer from white spot too, so it just wasn’t worth having it in the tank.

"And Spotted garden eels. Being sand dwellers they often missed out on food, so I would have to target feed them. That was a challenge as they would sink back into the sand when I tried to use a syringe." 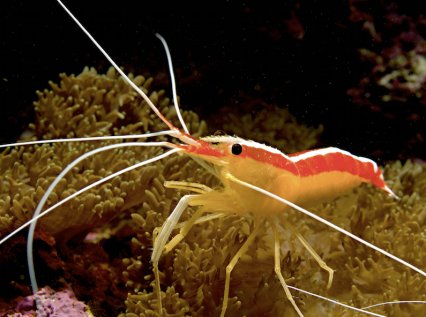 When it comes to feeding, Lee opts for a fresh, dry and frozen mix.

"I use flake food once a day, and I vary it between two types. Then they get live foods — a mix of Mysis, brine shrimp and copepods — once a week. I add granular foods for the Trachyphyllia and the Lobophyllia fortnightly. Lastly, I add frozen feeds of Mysis, krill and lobster eggs once a week, with Gamma coral foods. Ideally I use the coral foods a day before water changing."

Despite his successes, Lee isn’t arrogant about his set up: he knows what he’d change if the extra pennies were there.

"I’d have done a lot differently," he says. "I’d have liked to use sump filtration, if only for for ease of maintenance and better nitrate reduction, and I’d have incorporated a refugium to make this happen. I’d have gone for LED full-spectrum lighting for the ripple effect, as well as the option of sunset to sunrise settings. And it would have definitely increased the choice of corals I could keep.

Tanks like Lee’s should come as encouragement to those thinking of taking the marine plunge, but are currently scared off by the overwhelming choice of equipment and approaches. Yeah, he might not be sporting the most delicate of SPS corals, and neither will he be keeping the most sensitive fish out there any time soon, but for the price of glass, two tubes, one canister and a skimmer, he’s put together something that any aspiring ‘salty’ can be proud of.

Given how I’ve seen some absolute disasters involving ten times this much outlay, Lee can definitely claim that sometimes — just sometimes — less is more. 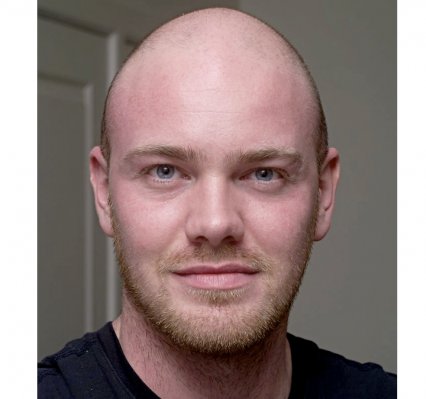 Name: Lee Colbert
Age: 27
Years keeping fish: More than 10 years.
Favourite fish: Clownfish and Yellow tang among others.
Most ever paid for a fish: £45 for his Yellow tang, Zebrasoma flavescens.
Dream tank: An in-wall shallow reef tank of 8–10ft long, but no more than 2ft deep.

Lee has a little advice for anyone hoping to do a tank like his.

"Research and plan," he says. "It’s important that you know what you want to stock from the initial start up, right through to when the tank’s fully stocked. Only this way you can ensure you can meet the livestock’s needs, whether that’s to do with their diet, lighting, filtration and even tank mates.

"Also, have a few good books on water chemistry and test kits: ultimately it’s your responsibility to maintain a happy healthy environment, not that of your local fish shop. Remember, the quicker you can identify a problem the easier it is to fix.” 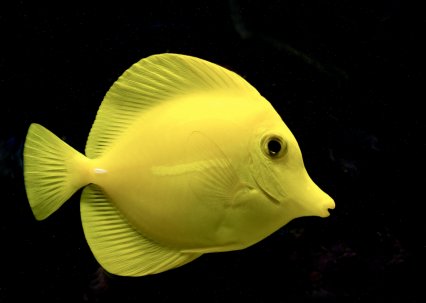 Ask Lee what his favourite fish is, and he’s stuck for choice.

Clownfish: "The clownfish I love, because they were the first additions."

Yellow tang: "I love this fish for colour, and the fact that he’s the happiest and healthiest specimen I’ve ever seen. He’s very chilled out and eats just about anything."

Orange spot chalk gobies: "They turn over the sand all day, non-stop, so I need to give them credit as my hardest workers. When it’s time for sleep they dive through the sand into a cave under a rock."

Midas blenny: "I loved her for the way she swam elegantly."