Bob Mehen explains why it's refreshingly different to branch out and keep more cryptic plecs.

What's your first image of plec? Chances are it's one of a large, prehistoric-looking fish, probably brown, all armour and suckermouth, lumbering around or sticking to the tank glass in search of a scrape of algae.

However, the more enlightened catfish connoisseur may see beyond and have a vision of a strikingly patterned L number cat that has taken the hobby by storm in the last decade with its striking range of colours

Graceful and delicate are words not generally associated with plecs, but the Loricariid catfish family is vast and varied, and seems to have evolved fish to fit into almost any niche in Amazonia where a sucker mouth and a body protected by bony plates could be advantageous.

At the more extreme end of family you'll find the 'whiptail' and 'twig' plecs. These often bizarrely shaped, making up the sub-family Loricariinae, which is a web of shifting taxonomy which includes more than 200 species split between some 30 genera. 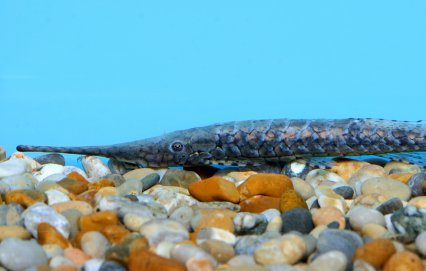 When it comes to cryptic plecs, few can compete with Farlowella, more commonly known as Twig plecs.

These have taken camouflage to new levels. Where your average plec is squat and bulky, bristling with spines and attitude, these have become slimline sticks, perfectly evolved for hiding in plain sight among the roots, branches and submerged plant life that litter the rivers they inhabit.

Their elongated bodies are still covered in the armour of their heavyweight cousins, but it's by blending with the background that they stay safe.

Everything is evolved to make them look like a twig — from their extended rostrum (nose), to the trailing extensions on the tips of their tails.

All this, added to an overall brown coloration, with a darker bar down their lateral surface, means that until they move it can be difficult to see them among real tree! They are poor swimmers, generally content to shuffle slowly on their twiggy refuges, using their mouth to move, and even when disturbed are more likely to drop like a falling twig than swim away in panic.

There are at least 25 described species of Farlowella and all look similar, often with what appear only minor differences in the shape or length of their rostrum, or arrangement of the bony plates that cover their bellies.

Farlowella acus is the name most often attached to the fish in shops or books, but this is unlikely its true identity. Experts think the true F. acus has probably never knowingly been imported for the trade and the species is threatened with extinction.

Most commonly sold seems to be F. vittata, with occasional specimens of F. mariaelenae, which live beside them in the wild. While F. vittata has been bred successfully in the aquarium, fish in shops will be wild caught, so, when buying, follow the same advice as with all plecs.

Check for sunken bellies and eyes and reject any fish showing these traits, as they are unlikely to recover.

Care requirements for all Farlowella in the hobby are very similar and they are hard to confuse with anything but a couple of closest relatives, so even if not sure of the exact species, you should at least be certain of a Farlowella! 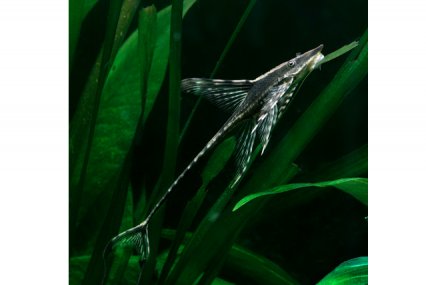 If there’s confusion surrounding the precise identity of many Farlowella in the hobby, it's nothing compared to the tangled taxonomy that surrounds the 'Whiptail' catfish.

That common name is given to a great number of different fish, from several different but related genera, and many yet to be fully described. Some of the most fantastically alien-looking catfish available come from this group, with hugely flattened and elongated bodies and magnificent fin extensions making up for their often generally brown colouration.

The only real problem with these fish is there are a great many species that look very similar at first glance, and as a result they are seldom sold under their correct scientific names — the vast majority described by the catch-all 'whiptail' tag.

If Farlowella are a bit too twiggy, you may be swayed by the graceful beauty of their bigger cousins from the genus Sturisoma These are graceful plecs, not prone to the cumbersome blunderings of bulkier relatives.

Whether a cryptic fish can be also flamboyant I’m not certain, but, for me, Sturisoma, commonly known as Royal or Giant whiptails, pull it off. These are generally bigger than their stick-like relatives, having larger bodies and fins, but they often share similar coloration, nose shape and tail extensions, which can lead to initial confusion.

Sturisoma means sturgeon bodied and alludes to their passing resemblance to the caviar-producing sturgeon. Compared to the often secretive Twig plecs, Royals are comparative show-offs, moving during daylight or spotted searching the substrate for food. Several species are regularly imported, but, again, plec relatives, mislabelling and general confusion abounds.

Sturisoma aureum, S. panamese and S. festivum are the names most likely attached to fish in shops, but whether this is the fish you're buying is sometimes debatable, especially in the case of S. festivum, a Columbian species not currently imported.

These are relatively easy to breed, so there’s a steady supply of attractive young fish available in the trade, often bred in Eastern Europe.

Sadly, like many other catfish produced commercially, hybrids have been appearing. It’s not certain if these are the result of deliberate practice, as in the case of African Synodontis catfish, or simply due to the difficulty of telling related species apart, but it’s worth being aware that hybrids are out there. Buy only wild-caught fish from a single source if intending to breed them yourself.

Sturisoma range between 15-25cm/6- 10”, not including their impressive tail extensions, but are still slender, so you won’t get an unwanted giant, regardless of species.

If Sturisoma seem a little large, or if you just want something smaller, a huge range of Common whiptails may be more to your taste. Again there are many different species imported under the name and it can be hard to tell one from another. 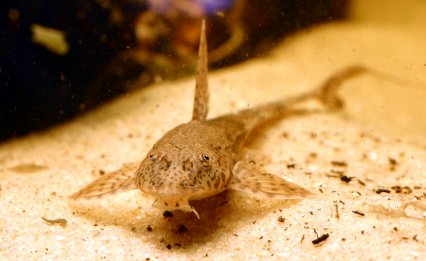 However, three species more regularly seen are Hemiloricaria lanceolata, H .parva and H. eigenmanni. These are wider, more flattened fish than Sturisoma and Farlowella, don’t possess the pointed snout of their twiggy cousins and lack the more extravagant finnage of Sturisoma.

Yet, as their common name suggests, they share the whip-like tail filament common to all these fish.

Ranging from between 10-15cm/4- 6” these reptilian-looking creatures spend most of their time on the tank floor, often propelling themselves with a shuffling, walking motion of their paired pectoral and pelvic fins. They are general a sandy beige, broken by a series of darker bars and blotches, giving them excellent camouflage when viewed from above. 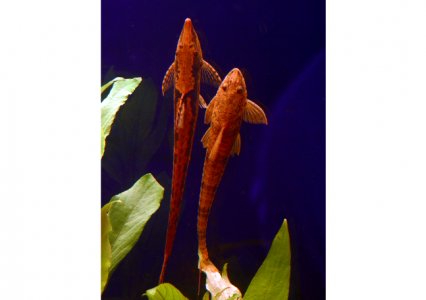 Loricariinae catfish are among the most peaceful plecs and most can be kept, problem free, in groups. They may not be bulky, but some species can be long and their armour makes them relatively inflexible, so while they don't need swimming space they do need plenty of room to manoeuvre.

All three groups can be considered plant friendly and even if not all live alongside lush aquatic vegetation in the wild they still seem to appreciate it. They can therefore make good choices for planted aquaria and not prone to rearranging décor and substrate.

Farlowella can be delicate and do best in stable water conditions, all doing well in soft, slightly acidic or neutral water at around 25°C/77°F. These are placid fish and should only be kept with similarly mild-tempered tank mates as they won’t be able to compete for food against more boisterous or aggressive species.

A range of foods, such as algae wafers, slices of vegetable, such as courgette or potato, will be gratefully accepted, but occasional supplements of meatier fare, such as bloodworm, will also be appreciated, especially by Sturisoma.

Farlowella will spend many hours grazing on the surface of wood and other décor and seem to settle quicker and do best in mature aquaria. Ideal tank mates include Corydoras catfish, smaller tetras and dwarf cichlids such as Apistogramma, but be wary of inquisitive species which may nibble at their impressive tail filaments. 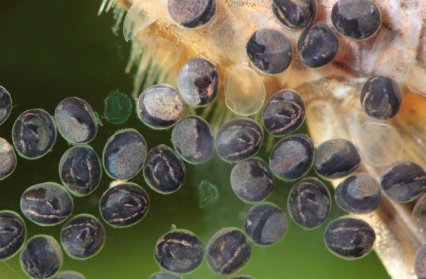 It’s possible to breed all the species mentioned here in the home aquarium. Male fish are easy to tell apart from females when in breeding condition, as all develop bristles on their rostrum, cheeks and, in some cases pectoral fins, while females can be a little bulkier, especially when viewed from above.

Hemiloricaria like to lay eggs in enclosed spaces, so provide plastic tubes or other similar more natural décor.

Sturisoma and Farlowella are more likely to pick a quiet, sheltered corner of the tank and lay their eggs on the glass, but it can be worth providing a piece of roof slate propped against the tank’s side for them to use. The males of all these fish will guard the eggs and newly hatched fry.