What's so special about the Mangrove killifish? Actually, rather a lot! This little fish can spend more than two months living out of water. And, as Andy Turko of the University of Guelph explains, that's not the only thing that makes the Mangrove killifish unique.

Despite their relatively drab appearance, Mangrove killifish, Kryptolebias marmoratus (Poey), have been the subject of a flurry of research due to their unique life history.

They are amphibious fish, able to spend time in water or in moist habitats on land. This behaviour requires a range of adaptations which are just beginning to be understood.

Mangrove killifish live in brackish mangrove forests of the tropical west-Atlantic. While a rich ecosystem including hundreds of fish species, exists around the coastal margins of mangrove forests, the harsh environment further inland limits the fish fauna to only a few species.

Here, fishes occupy small pockets of water such as burrows excavated by land crabs.  Conditions in these burrows fluctuate with tides, weather, and seasons, but the habitat can be generally typified by low dissolved oxygen and the presence of hydrogen sulphide from rotting mangrove leaves.

However, 26 killifish have been found in one burrow. Besides being able to tolerate poor water conditions, how can a fish occupy this niche? One solution is to become amphibious.

Many cues cause killifish to leave the water, or emerse. High levels of hydrogen sulphide, low dissolved oxygen, aggression from other fish, hunger, and drought have been suggested as triggers for emersion.

These foraging trips are short, but during the dry season killifish can remain out of water for over 66 days. During these periods, killifish seek refuge in leaf litter or inside insect tunnels within rotting logs. The ability to survive out of water for such durations has required the evolution of some unique physiological traits. 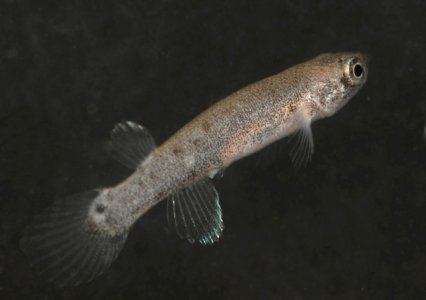 The gills of fish are the most important site for interactions with the external environment.  Gills are the site of oxygen uptake, waste excretion, and salt regulation. But what if gills become non-functional?

Mangrove killifish stop ventilating their gills while out of water, and after one week on land the gills are physically modified in a way that likely prevents damage but also reduces functionality. The skin takes on the functions of the gills. Dense networks of blood vessels just below the surface of the skin receive increased blood flow during emersion, allowing oxygen uptake to occur here rather than at the gills.

The skin also becomes the predominant site of excretion of the metabolic waste product ammonia. Mangrove killifish excrete ammonia through the skin as a gas.

Mangrove killifish are the only known self-fertilising hermaphroditic vertebrates. This means most adults possess ovaries and testes, and are capable of internal fertilisation. However, some populations are known to contain males. These males reproduce sexually with hermaphrodites, increasing population level genetic variation. This strategy, known as androdioecy, may provide a "best of both worlds" system well suited to highly variable environments. Newly "discovered" burrows can be rapidly populated by a single fish, while genetic variation allowing future evolution is maintained by males.

Researchers around the world are studying the Mangrove killifish, and many questions remain. From physiology to behaviour, genetics to ecology, biologists of every discipline are beginning to understand the survival strategies of this superficially mundane fish.