What you need to know about tank decoration Some objects lurking in tanks may be little more than ticking time bombs, waiting to blight their host aquarium, and sometimes with devastating consequences. Here's what you need to know about how to decorate your tank...

There are so many natural objects you can place in the aquarium, it’s easy to think there’s no such thing as an unsafe decoration. However, heed our warnings of some potential dangers. 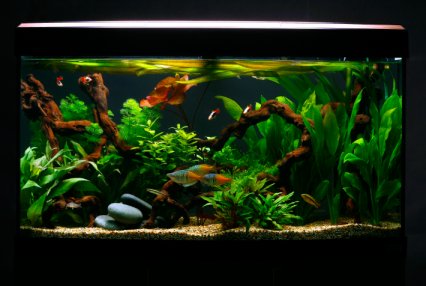 Wood can turn an OK aquarium into a gorgeous biotope, but take care when using it.

The biggest issue with any wood is what it can leach out. Shop- bought bogwood, Mopani, Sumatran drift, Red Moor and the highly prized Manzanita woods are not cheap — especially the latter two — but they have good standing in the hobby as safe bets.

Vivarium wood, such as Grapevine, is too soft for aquarium use and will rapidly rot. In fact, for this reason, all softwoods are to be avoided.

Bogwood and Mopani are notorious for leaching tannic acid into water. This needs to be addressed prior to placing the wood into a tank and is done by soaking the wood until it has stopped leaching.

Depending on the individual piece this may take days, but dense pieces may require several weeks until they stop expelling acids which are visible as brown discoloration. 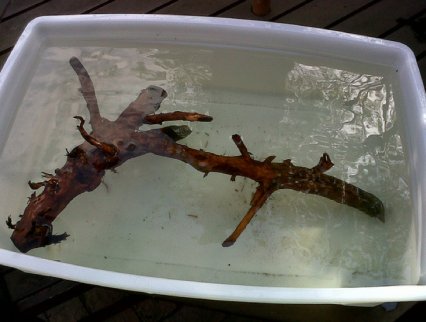 All woods are buoyant and need to be soaked before use (as pictured above by chrissatchwell, Creative Commons). They will otherwise just bob around on the surface for a week or two!

If opting to use cork bark, this will always need to be secured to keep it down. Aquarists will often pin it in place using a rock, although more wily enthusiasts glue or screw their cork onto an acrylic plate that’s then buried in the substrate, or even siliconed to the base of the tank.

Some aquarists follow a current trend and collect their own woods from natural sources, but this practice is fraught with risks.

Many types of wood are unsuitable for aquaria. Aromatic woods, for example, contain toxic phenols and branches from pine and yew trees will leach toxic sap into the water, poisoning fish.

However, some woods, especially those of fruit-bearing trees like cherry, pear, apple and oak are safe to use, albeit with some conditions….

Any collected wood must be ‘dry’ to be used in the tank.

If branches are still bendy they are retaining some toxic sap. Likewise, if they show any green coloration in the middle of a branch they are too fresh for aquarium use.

Any collected wood, and much aquarium store wood, will contain fungal spores that reactivate once wet. These reveal themselves as a slimy grey mould that creeps over all wood surfaces.

Some catfish appear to actually graze on this mould, but most aquarists like to remove the affected wood and scrub it with a firm brush and hot water before returning it to the tank. Eventually the mould will usually disappear naturally.

If collecting wood, take care as regards its source. For example, it would be unwise to take any from an area where pesticide use was known and widespread.

Check laws prior to collection as a matter of importance. It is illegal to take wood from private land without permission and even on common land you may require a scavenging or firewood licence. Many bylaws also apply to collection and one definite no-no is the act of tearing your own branches from a standing tree — even a dead one.

Recent changes to the law have overwritten those of the Magna Carta, whereby every man had the right to fallen wood from forests and woodland.

If permitted to take wood from a wild source, remember to keep disturbance to a minimum and only take what you need. Rotting branches are an important part of any natural ecosystem, providing a home for wildlife and returning nutrients to the earth.

Once collected, it is wise to scrub the wood with a hard brush and soak it in boiling hot water for some time before use.

Some people like to use dilute bleach mixtures to improve safety, but, if doing this, the soaking stage to allow impurities to leach back out should last several weeks — and with numerous water changes. 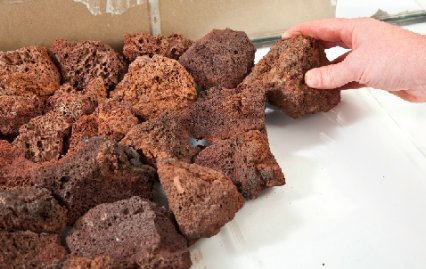 As with woods, a good selection of rock is always available from retailers, and most of it poses no risk. However, pending water conditions, some are best avoided.

Limestone and other calcareous rocks should be avoided by keepers of softwater aquaria.Like seashells, these can leach calcium carbonate into the water and have an undesirable effect on hardness and pH.

Test for calcium carbonate by applying acid to the suspected rock to look for any fizzing. Vinegar is often used for this purpose, although geologists will use hydrochloric acid, which is more accurate but considerably more dangerous. If using hydrochloric, wear gloves and goggles. 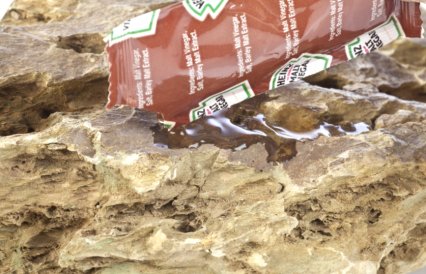 Add vinegar to inert rock like this Dragon stone... 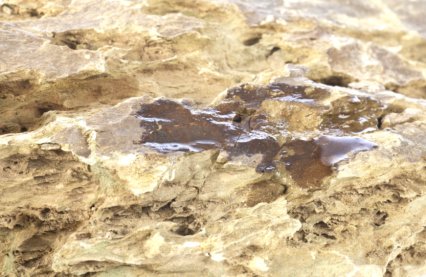 ...and after a few seconds nothing happens. 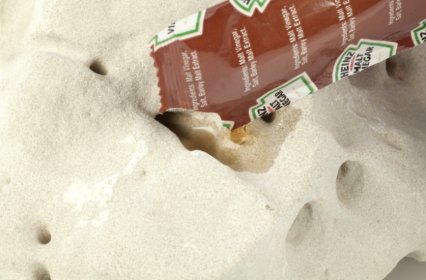 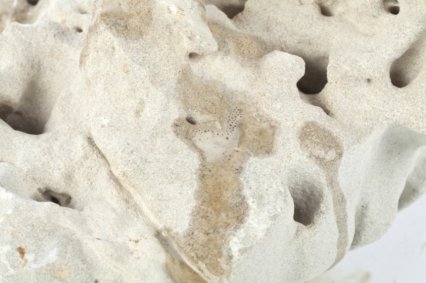 ...and fizzing shows this rock isn’t for acidic tanks!

Although not a rock, coral skeletons should be avoided — and not just for ethical reasons. These skeletons comprise little more than chalky calcium and can play havoc with water.

Avoid soft rocks in general. If a rock has a powdery texture, or if it crumbles when scrubbed underwater with a firm brush, it will be no use in the aquarium.

Shale, which is not the same as slate, should be avoided too. Often it can carry hydrocarbons — literally petrol — that will form an oily layer on the surface, assuming they don’t kill fish in advance.

Slate, by comparison, is safe, but avoid excessively sharp edges which may injure fish.

Soft water aquarists would also do well to avoid rocks with veins. These can represent the presence of metal ores and, in acidic conditions, can leach out heavy metals.

These, such as zinc, copper or lead, can be lethal to aquarium inhabitants, especially invertebrates.

Some, like pyrite, can make matters worse by making the water even more acidic — prompting the release of yet more metals!

As with wood, take care when sourcing rocks. If taken from a dead river, you need to know why the river lacks life. Anything taken from it may be rife with toxins.

Although they tend not to require the soaking period of woods, rocks will still need to be furiously scrubbed with hot water to remove anything from the surface prior to placement in the aquarium.