Weird fish of the week: Swallower In our search for piscine peculiarity we plunge back into the darkness of the ocean's abyss as we take a look at the sinisterly monickered Black or Great swallower, Chiasmodon niger.

On first inspection these fish look little different to many others found lurking in the deep ocean's darkness. At around 25cm/10" long it's certainly not a giant and neither is it covered in flashy photophores or endowed with eyes the size of dinner plates – instead it looks a bit like a slightly sickly haddock which has accidentally got a set of Halloween plastic vampire teeth stuck in its mouth.

It's a closer inspection of this dentition and the jaws which contain it that unlock the weirdness of this fish and explain its common and scientific names.

Both the upper and lower, prognathous jaws are filled with long, interlocking backward pointing teeth, the first few of which are especially long meaning any prey caught is unlikely to wriggle free. 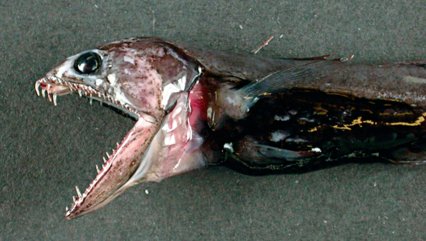 The species scientific name eludes to this, Chiasmodon coming from the Greek words for 'cross' and 'teeth'.

These jaws are remarkably extendable with both upper and lower jaws articulated, allowing the fish to open its mouth in a huge gape to swallow larger prey and this it certainly does.

The fish isn't sometimes called the Great swallower without reason as it has a massively distensible stomach in which it can hold and digest prey over twice its own body length and around ten times its own mass.

It has been speculated that the fish manages this by 'walking' its jaws along its victim in the manner of a snake until it is squeezed coiled into the swallower's belly.

The truth is though that very little is known about the behaviour or lives of these fish. Despite being distributed throughout the world's temperate and tropical oceans the fish has yet to be seen alive, (they typically live at depths of between 700 and 2700m), the majority of specimens being found dead or dying on the ocean's surface, often as victims of their own gluttony.

In 2007 a well documented 19cm/7.4" specimen was found dead off Grand Cayman in the Caribbean (see picture at the top of the page). In its belly was a 86cm/34" long Snake mackerel, Gempylus serpens, itself a voracious predator. It is thought that the mackerel had either ruptured the swallower's belly with a combination of its pointed head and sheer bulk or that the prey was so large that decay had set in before digestion could occur fully and the gases produced by this process had forced the fish to the surface where it died.