HD lighting is a feature, say TMC, that by using custom optics and the brightest generation of power LEDs, makes them an alternative to metal halide and for hard coral aquaria.

With many claiming lighting is all about PAR, and TMC going up against the metal halide market, we were keen to find out more…

"PAR is important, but so is how they use that light, how light is delivered and its spectral quality," said TMC’s Gyles Westcott and Michael Barrett. "There are many assumptions about light based on existing technology, and a lot of them had not been challenged. We are looking to deliver a technology that has its own set of inherent benefits.

"We think that there’s now an opportunity to provide new technology that delivers a different set of benefits and when it comes to this the hobbyist needs an open mind. The existing school of thought seems to want to wash the entire tank with light, but different animals on the reef live at different depths and receive different levels of light, so varying light may be beneficial.

"We still see AquaRay providing overall lighting for an aquarium. We don’t see ourselves as providing ambient or moonlighting. Some people get into hobby niches that perhaps you can’t cater for, but if you look at the general marine hobbyist their tank is a maximum 0.6m/2' deep, there is rockwork and invertebrates are at varying levels.

"Given that most people are like that, we say our product is absolutely appropriate.

"We know PAR drops off quickly with depth. At the surface it is very different to 300-400mm/12-16" depth so there is always that trade-off. Our solution has been proven and so far we have sold 15,000 AquaBeam units and now sell over 1,000 units per month.

"There is a distinction between light viewable by humans and light that is readily available to the animals,” explained Michael.

"When you look at PAR values in particular it may well be that halides are more efficient at delivering higher values to greater depth, but there is always a price to be paid and with halides it comes with temperature and energy consumption. It comes down to being the best you can deliver with a new technology.

"There will always be people who maintain that halides are the best for lighting a reef, but you have to pump in massive amounts of energy to do so,” Gyles added.

"Halide is the brightest, but given the other trade-offs this new LED technology brings, isn’t it a worthwhile trade off?

"We believe our lights provide a positive contribution to the hobby as a whole.

"We are plugged into the supply chain and fitting our products to suit that market.”

"LED lights are point source by definition,” said Michael, “so optics can be used in front to spread light. Current AquaBeams have lenses to provide punch down to depths. Now the 1000 HD is penetrating depth we are looking at relaunching the AquaBeam 500 without the lensing so it is more of a spread, and can be used alongside the 1000HD to create a lighting scheme.

"You can use these in a closed hood system instead of having to remove it to raise them high enough to get the spread."

Gyles added: "The hobbyist will also get more of what they imagine aquarium lighting to look like, instead of the five light points seen with existing units."

"Even with the new lens-less AquaBeams you still don’t get lateral light spillage, and subsequent wastage, as you would with fluorescents. Light shimmer has been improved, so new AquaBeam 500s have more light spread but also more shimmer. You still need water movement to accentuate shimmer, but now you don’t need the height."

If you have an SPS only tank dominated with Acropora, PFK recommends more than two HD units to replicate the brighter light offered by 250w metal halides, or multiple T5. More conservatively, we also recommend one 1000 HD light for a tank of 45 x 45cm/18 x18". on its own. Any larger and you need to raise the marine 1000 HDs unusually high.

At the launch of the AquaBeam 500 we had reservations about fittings, though since the launch of the Aquaray Modular Mounting System (MMS) TMC could possibly have created the most flexible mounting system available. The rail can be fitted with AquaBeam 500s, 1000 HDs, or a combination of both, and can also be cut to length and has width adjustment.

Rails and lights can be fitted in parallel or you could even create a figure-eight with seven units and, for the best possible set-up, put two 1000 HDs in the gaps.

Rails can be revolved within their axis so horizontal, directional light could be tilted towards the back of the tank, and there are even retro fittings to enable AquaBeams on an MMS to be fitted into standard T8 and T5 linear housings.

These systems have height and length-adjustable wire ceiling fittings. and you can even build your own luminaire. Use as many hanging wires as you like too. Use four in a rectangle instead of two in a row and the lights will hang better.

TMC say that over their five-year guarantee period, HD units will cost 1.5 times their purchase price to run. Then compare it to a 150w metal halide which, TMC claim, will cost six times more. The cost of a chiller, necessary for most reefs with halides, has not been factored in either.

AquaBeam 1000 HDs are also said to use 10% of the carbon footprint of halide.

TMC are also launching their AquaRay Control unit which is compatible with all AquaBeam products to dim, time and control, recreating the sunrise, sunset, daylight and moonlight phases. Retailing at £79.99 per controller, each can independently control two channels — so two AquaBeam 500s or two separate circuits within the 1000 HD and dimming can range from off to 100% and any percentage between.  The shortest full fade on/off is a minute and longest 4.5 hours. 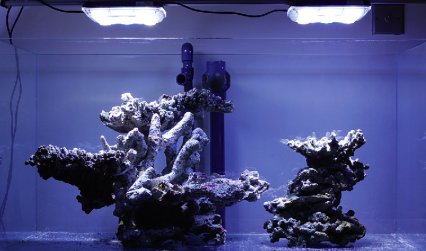 TMC are proving that LED is a viable alternative. Hats off to them for listening to us and you, and providing a versatile range of fittings and solutions for the vast majority of tanks and situations. They’ve even changed the freshwater spectrums as a result of feedback, making it more white and less yellow — and increased the light spread.

LED does look very different but be open minded. If you don’t want to jump straight in, add one to your existing lighting and benefit from a more natural, daylight appearance.

Directional light can be weird to get used to as you get more shadows than with fluorescent, though less algae on your glass — and less light spread means my living room doesn’t look like a UFO is landing at night now.

I still like T5 and metal halide, especially when I saw the results achieved by a combination of both on David Saxby’s mega reef. However, I really like these HD units too.

Two 1000 HDs will do the PFK tank for a mix of soft corals, LPS hard corals and SPS directly under the beams, though if we go to SPS only and wanted them at all levels we would prefer more HD units or with AquaBeam 500s in combination, as the two HDs are very directional vertically down.

For traditional aquascaping with corals all over the place, you’ll need LED lighting placed to illuminate them.

I have been compiling a tank and review equipment for a potential ‘modern reef’ aquarium for some time, seeing just how low energy a modern reef can be. See our Tunze Kit 15 review as this company are also going down the low energy route.

Seventy watts of quality skimmer and pumps, plus 60w of bright AquaBeam lighting equals 130w. A few years ago you would be lucky to assemble the same spec for much under 1kw!

For the first time in ages my problem might not be cooling and I’m going to enjoy paying less to power my hobby.

I don’t think you can get better lighting than these HD units for nano tanks either. Imagine their power! No coral or plant would be beyond reach in terms of lighting requirements.

Heat and power consumption will not be limiting factors with small tanks and closed hoods, and even on big tanks.

This item was first published in the October 2009 issue of Practical Fishkeeping. It may not be reproduced without written permission.