On the back of this relatively gigantic female anglerfish sits a tiny parasitic male. It's the world's smallest sexually mature vertebrate. Ted Pietsch explains more about the strange sex lives of these tiny fish.

In the great depths of the world’s oceans, where temperatures are near freezing, light from the sun non-existent, pressures from the weight of water above inconceivable, and biomass so low that meals are far and in between, there are fishes that practice an extraordinary and unique mode of reproduction.

These are the oceanic anglerfishes, 160 species that attract their prey by wriggling a bioluminescent lure, and that differ remarkably from all other fishes, and, for that matter, all other animals, by displaying an extreme sexual dimorphism in which the males are dwarfed.

In some species males attain adulthood at lengths of only 6–10 mm and hold the Guinness World Record for the world’s smallest sexually mature vertebrates. 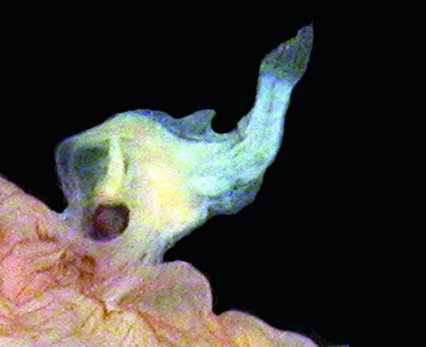 A secure attachment
They attach themselves (either temporarily or permanently) to the bodies of relatively gigantic females - see picture above.

In Ceratias holboelli, the Northern Giant Seadevil, where the most extreme examples are found, females may be more than 60 times the length and about a half-a-million times as heavy as the males.

The males of most species are equipped with large well-developed eyes and huge nostrils, the latter used for homing in on a female-emitted, species-specific chemical attractant.

Normal jaw teeth of the males are lost during metamorphosis, but are replaced by a set of pincer-like denticles at the anterior tips of the jaws for grasping and holding fast to a prospective mate.

In some species, attachment is followed by fusion of epidermal and dermal tissues and, eventually, by an apparent connection of the circulatory systems so that the male becomes permanently dependent on the female for blood-transported nutrients, while the host female becomes a kind of self-fertilising hermaphrodite.

Permanent attachment is usually accomplished by means of separate outgrowths from the snout and tip of the lower jaw of the male, both of which eventually fuse with the skin of the female.

In some species, a papilla of female tissue protrudes into the mouth of the male, sometimes appearing to completely occlude the pharynx.

The heads of some males become broadly fused to the skin of the female, extending from the tip of the lower jaw to the rear of the skull, appearing as if embedded or absorbed by their mate, while in others, the male is carried at the tip of an elongate, cylindrical stalk of female tissue.

Increasing considerably in size once fused, their volume becoming much greater than free-living males of the same species, and being otherwise completely unable to acquire nutrients on their own, the males are considered to be parasites.

They apparently remain alive and reproductively functional as long as the female lives, participating in repeated spawning events.

A single male per female appears to be the rule in some species, but in others multiple attachments are relatively common, with as many as eight coupled to a single host.

Since its discovery more than 80 years ago, the story of sexual parasitism in ceratioid anglerfishes has become a part of common ichthyological knowledge. However, the known facts concerning this remarkable reproductive mode have never been thoroughly or satisfactorily analysed.

The physiological mechanisms (endocrinological and immunological) that allow for sexual parasitism, which could be of significant biomedical importance, have never been explored.