The role of the micribiomes in fish 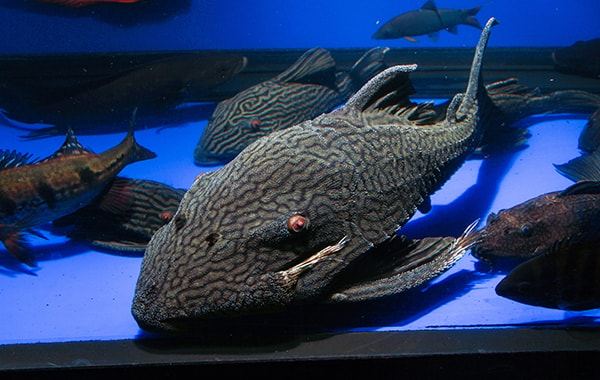 One of the areas of fish biology that is poorly understood is the interaction between the countless populations of bacteria that live on and in the fish and the physiology of the fish itself. Clearly for those keeping and culturing fishes, knowledge of the role of these bacteria in fish health and disease is vital.

This complex collection of bacteria, but also other microorganisms such as yeasts, fungus and viruses is known collectively as the ‘microbiome’. The community complexity of these microbes was historically hard to investigate. Even in the mid 1990’s, it was generally accepted that the levels of bacteria living in humans was far greater than that in fish. However, this knowledge was based on traditional microbiological methods where bacteria of interest are isolated and cultured on growth media and can from there be studied.

More recently modern DNA sequencing technologies have enabled microbiome researchers to sequence short sections of the 16s RNA gene that includes sections of great variability between species, allowing different species to be identified. This has revealed a staggering diversity of bacterial species, not only when this technique is applied to the fish microbiome, but many other animals, not least humans. Not only has a vast diversity been revealed but we can now see that only 0.1% of the bacteria living in fishes are actually culturable, rendering traditional microbiology of very limited use in the understanding of the fish microbiome.

So how do these bacteria get into the fish, where do they live and what do they do for the fish?

Though bacteria can dwell on the skin, in the mucous, blood and internal organs of the fish, it is those species that are found in the gut that are the focus of most research and this is what we’re going to focus on today. There are believed to be between 107 – 1014 bacteria (representing over 500 different species), per gram of intestinal content in fishes. There are species which require oxygen to survive, some which can survive without oxygen and some for whom oxygen is toxic!

In the egg, (inside the mother in the case of livebearers), the larval fish gut is generally believed to be bacteria-free. For egg-layers, upon hatching the larvae rapidly establish a gut microbiota from the water and their feeds as they feed themselves through their mouths.

As the fish develops, so does the microbiome; research reveals that the community composition can vary with location down the gut, geographical location of the fish and season. Even individual sibling zebrafish, reared in the same water were shown to have subtly different microbiomes. However, some clear patterns in fish microbiomes are evident.

Community complexity increases as we examine carnivore, omnivore and herbivorous fishes. For example, the latter are much more reliant on microbial help for digestion of complex plant nutrients. The gut of the Royal Plec, Panaque nigrolineatus, contains cellulose and nitrogen-fixing species to help it effectively digest its complex diet which can often include wood. Freshwater fish microbiomes are dominated by bacteria of the genus Acinetobacter, Aeromonas, Flavobacterium, Lactococcus, and Pseudomonas, obligate anaerobes Bacteroides, Clostridium, and Fusobacterium, and members of family Enterobacteriaceae dominate the gut of freshwater species. Whereas, the guts of marine fish are dominated by Aeromonas, Alcaligenes, Alteromonas, Carnobacterium, Flavobacterium, Micrococcus, Moraxella, Pseudomonas and Vibrio.

The benefits these resident microbes offer extend way beyond simple assistance with digestion and competitive exclusion of undesirable taxa. The situation is far more complex and intimate. For example, there is no clear distinction between beneficial gut bacterium and pathogen; in fact this is a spectrum and external factors such as fish stress can affect the impact of the gut microbiota on the fish for good or bad. Stress induced by low oxygen levels was shown to increase the abundance of bacteria with a pathogenic potential in the skin of trout. Infection of salmon with the salmon louse was similarly shown to disrupt the skin microbiome of the host fish.

Pioneering work on the microbiota of zebrafish required the rearing of germ-free larvae, in other words young fishes with no intestinal microbiota. These germ-free fish larvae were shown to have decreased resistance to viral infections, altered gut cell layer development and function, failed immune gene development and compromised immune functions. Vitally, these functions were all restored to normal when the gut was colonised with the usual microbiota.

The microbiota of zebrafish was shown to regulate the expression of 212 genes of the fish, including those involved in the growth of cells of the fish’s gut wall, those involved in nutrient metabolism and the fish’s immune response. The fact that the resident microbiota have been shown to be involved in the gene expression of the fish host demonstrates how intimate, ancient and vital this association is, and how important it is that those keeping fishes work in tandem with this complex system, not against it.

One way to enhance the microbiome of the fish is to add ingredients to their feed. Probiotics are defined as “live microorganisms which when administered in adequate amounts confer a health benefit on the host”. Prebiotics are substances indigestible [by the fish] that allow specific changes in the composition and/or activity of gastrointestinal microbiota, which has a positive effect on the nutrition and health status of the host. There are many examples in the research literature of key immune system or growth parameters improving when fish are fed probiotic enhanced diets. The challenge is utilising these additives, to ensure the correct concentration of the right species remains in the food when it is fed to the fish.

At Tetra we have been adding prebiotics to some of our fish foods for several years. These prebiotics are usually one of several non-digestible fibre substances found in plants or yeasts, their role is to nourish the intestinal microbiota rather than the fish. Plants such as chicory or Jerusalem artichoke for example contain inulin, a promising prebiotic in their tubers which are often added to animal feeds. Benefits of addition of these prebiotics are very clear from research trials on several species; Nile tilapia (Oreochromis niloticus), fed a diet supplemented with inulin showed significantly improved growth and food digestibility compared to control fish. The microbial community of the control fish, (fed no prebiotic), was highly distinctive as revealed by DNA-sequencing methods, compared with that of the fish fed prebiotic enhanced foods. In carp, (Cyprinus carpio), fed prebiotic-enhanced diet, numerous immune parameters were elevated compared to the control fish. Growth parameters varied depending on the type of prebiotic used. Our own research at our fish nutrition labs revealed that, of several candidate prebiotics, inulin gave the best all round performance for a range of ornamental species, which is why it’s is the principal prebiotic addition to TetraMin.

Overall, this is such a new field of biological research and we have only just developed the tools to investigate. The take home message is that healthy fish are dependent on their gut microbiomes and as enlightened fishkeepers we should work to maintain and enhance this by avoiding stressing our fishes and feeding a quality diet that has prebiotics added to promote the ‘good bacteria’.