Named after Hans-Werner Balling who developed it, the Balling method seeks to solve the problem of maintaining calcium, carbonate, magnesium, and trace element levels in reef tanks.

This method and the two-part method of supplementation are almost the same, but the latter involves two solutions added independently to supplement either calcium or alkalinity.

What are their chemical compositions?

Calcium chloride and sodium carbonate supplement calcium and alkalinity respectively and both are needed by many marine organisms to grow their calcereous structures, such as the skeletons of Acropora spp. The last chemical listed, a combination of magnesium chloride and magnesium sulfate, is incorporated into Balling and is often paired with two-part to maintain magnesium levels for a total of three liquid solutions.

What is the most discussed aspect of the Balling method?

This involves the use of NaCl free salt. It is literally synthetic salt mix that lacks sodium (Na) and chloride (Cl). Under normal circumstances the addition of sodium and chloride is not a concern, and minute in comparison to their abundance in seawater.

However, with heavy supplementation, sodium and chloride byproducts from calcium chloride and sodium carbonate can increase the salinity of the aquarium and thought to knock the ionic balance in relation to other elements.

NaCl free salt is typically incorporated into a magnesium solution as shown by this example of a Balling set-up: 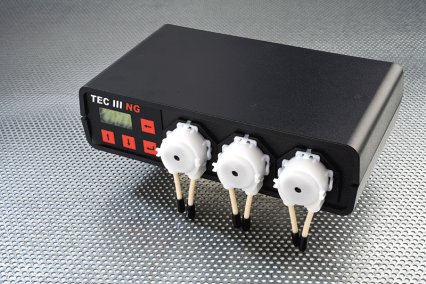 Can you vary the dosing programmes you use?

Manufactures sell pre-made trace element solutions that can be added to the three main solutions of calcium, alkalinity and magnesium, However, some hobbyists prefer different supplemental programmes and create their own from chemicals that are available.

As long as he or she is fully aware of the potential chemical reactions, the mix and match of Balling elements is almost endless. These variations often include these trace elements and additives: barium, copper, chromium, iodine; strontium, zinc, iron, amino acids; cobalt, nickel, potassium and organic carbon sources.

Many of these modifications have been given names such as Balling Complete or Balling Plus — but the most popular variant is the Balling Light. This includes trace elements, but skips the NaCl free salt as used in the traditional Balling method.

A Balling Light set-up would look identical to the traditional method above, but without the salt used in Container 3. In this case it is simply two-part with the addition of magnesium, trace elements and has an emphasis on weekly water changes (>10%).

The weekly water changes take the place of NaCl free salt to address possible ionic imbalances. Due to the cost of this salt and various additives used in traditional Balling, many opt to take a road down this route.

What benefits will I see and how can I measure accurately?

The greatest advantage of Balling is control — but this can also be its greatest problem. It is up to each aquarist to measure how he or she utilises calcium, alkalinity and magnesium and doses each additive accordingly. Thankfully we have reef chemistry calculators available free online and the one at pfkmag.com/esqxc addresses nearly every popular supplement, making this task extremely simple.

Enter the total aquarium volume, select the supplement being used, add the current level of calcium or alkalinity and then the desired level. The calculator will then register the exact dosing amount required to reach your target parameter value.

Once the requirement is calculated, dosing can simply be done by hand, or, better still, automated with peristaltic dosing pumps. These bring stability and hands-off benefits of calcium reactors to the method.

Dosing pumps favourably rival the high expense of calcium reactors at roughly £50 to £120 per pump head, depending on brand and model.

How can I find equilibrium?

Additional supplements like calcium chloride or sodium carbonate used in Balling will be needed to adjust to desired levels. This can create potential problems for those seeking parameters different to what their salt provides. With the Balling method we can quantifiably adjust calcium and alkalinity to a desired level and account for the elevated parameters often found in commercial salt mixes.

Is the Balling method a definite improvement?

We currently cannot say that it genuinely improves on the traditional two-part additive method or on a calcium reactor.

The inclusion of trace elements is often based on the belief that animals can handle stronger concentrations better than deficiencies. However, such elements cannot be measured accurately by the home reefkeeper. As such, we are unaware of trace element levels and utilisation within the aquarium, making their inclusion controversial.

Some argue that these additional trace elements are not needed at all — and these enthusiasts have an argument. Many reef aquariums flourish without intentional additions of trace elements. More importantly, when performing frequent water changes with a quality salt, trace elements are replenished.

Until intense laboratory research measures the effects of these trace elements in the aquarium, the rate at which they are being depleted is unknown. So are they necessary? That’s still up for debate!