The age of maturity Why do you need to cycle your aquarium's filtration system? Nathan Hill answers that very important question and explains the methods to use.

Cycling an aquarium is a case of populating a filtration system with a colony of micro-organisms, namely a mixture of bacteria and/or archaea.

We need them to use pollutants as a food source — and in doing so they turn harmful fish wastes into decreasingly harmful chemicals. 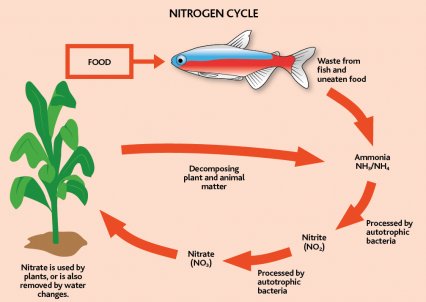 Fish excrete lots of waste. Uneaten food decomposes in aquaria and fish metabolic functions produce effluvia. As they burn energy they create ammonia and its presence in a tank signifies a destroyed, ailing or non-established filtration system.

Ammonia rapidly accumulates in an aquarium and in tanks with a pH value more than 7.0 that’s a big problem. The more alkaline the water the more dangerous ammonia becomes.

In an establishing aquarium, bacteria and archaea convert ammonia into another chemical — nitrite, or NO2.

This is still harmful to fish, though not quite as terrible as ammonia.

Even so, levels in the water will cause poisoning, whereby blood is affected by nitrite and loses its ability to carry oxygen.

As well as showing many symptoms of ammonia poisoning, affected fish will have rust-coloured gills, along with streaks of blood visible in the fins and skin.

Further bacteria and archaea develop as a tank matures, converting this harmful nitrite into a third chemical — nitrate. By comparison to the other chemicals, nitrate is much less harmful at low doses and at typical values is considered safe enough.

This end state, with enough bacteria and archaea to convert all harmful fish wastes into nitrate, is classed as maturity and the only safe condition for fish. Exposure to either precursor chemicals, ammonia or nitrite, is dangerous and unnecessary for your livestock. 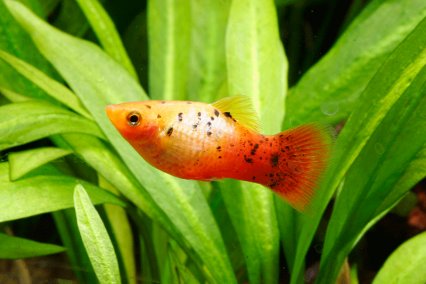 Fish-in cycling
If you’ve spoken to a retailer it’s possible that you have already been instructed to do 'fish-in' cycling without realising it.

Fish-in cycling involves setting up a new, unestablished tank and adding a few 'hardy' fishes. These will produce wastes and in theory give the filter a food source to encourage the growth of bacteria. Adding a bacterial food source without adding bacteria is known as 'feeding' the filter.

Additionally, you may have been advised to add a biological starter fluid, powder or capsule at the same time as adding fish. This method of adding bacteria is known as 'seeding' and both this and feeding can actually take place in the absence of fish.

Many aquarists have made a good start using the fish-in method, but many more have not.

Even those successful cases will often involve exposing the fish in question to varying levels of ammonia or nitrite while the filter matures and it’s safe to say that cases of ‘instant maturation’ where these fishes have not been exposed to any pollution are rare to the point of insignificance.

The only real benefit of the fish-in method involves pandering to the new aquarist’s impatience, but the benefit to the fish is non-extant and the risk to fish massive. For this reason we at PFK do not condone this method of cycling, preferring to adopt the more patient approach. 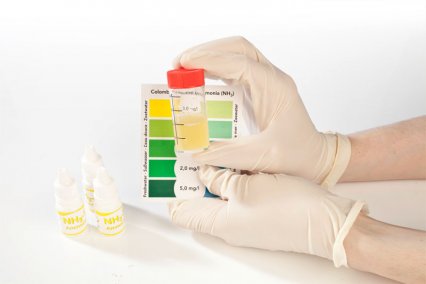 However, if you have been advised to use this method you will need access to some quality testing kits (for ammonia, nitrite and nitrate, as well as pH), a keen eye to detect the first sign of trouble and an inclination, or resignation, to be regularly changing lots of water.

Monitor your water quality daily, even twice daily if you can, and be prepared to change 25-33% of the water if ammonia or nitrite starts to creep up above 0.1ppm. At pH 8.5, just 0.17ppm of NH3 can be lethal within four days.

This is where the fish-in method starts to be counterproductive, as you always have a duty to keep your fish in good quality, pollution-free water. However, without experiencing that very pollution in the early stages of the tank’s life it will be impossible to feed and grow the bacteria.

Add any biological supplements as prescribed, keep feeding to a minimum as more food produces more waste, and hope for the best because there’s no easy passage through a fish-in cycling journey.

Do supplements help the process?
It seems to be the norm these days to add a biological supplement to a maturing tank — but do they do anything?

Many supplements contain a mixture of heterotrophic and autotrophic bacteria, though how many of this latter, essential type are included is cause for huge and ongoing debate.

The discussion has become all the muddier, thanks to research that indicates that bacteria aren’t even involved in an established filter and that archaea eventually do all the work.

However, these supplements do have a role in helping with the initial establishing of a tank, and if you have them you should use them. Just don’t expect them to result in miracles!

Another great way to help mature a tank is to take handfuls of established filter media from someone else’s aquarium.These bacteria/archaea should hopefully then colonise. 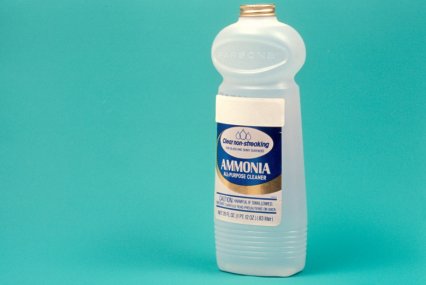 Fishless cycling
This method involves using household ammonia or a designated aquarium ‘waste substitute’ that mimics pollution. It can also involve the use of fish food, but this potentially produces bacteria types less suited to dealing with raw fish wastes.

Two kinds of bacteria are involved to varying degrees in the  maturation of the tank:

Autotrophic bacteria convert what we would consider 'raw' fish waste, dealing with chemicals that do not have carbon attached such as the ammonia (NH3) and nitrite (NO2) we want to control.

Heterotrophic bacteria work on chemicals that have carbon attached and though they convert food into less harmful wastes they may do so in such a way that isn’t exactly helpful in dealing with the carbon-free chemicals that form the bulk of our problems. 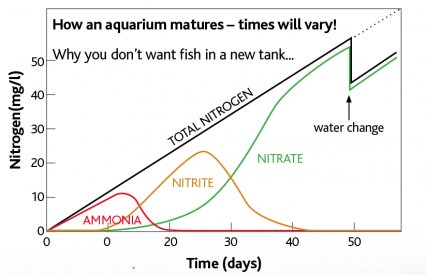 There are roles for each type and both are really needed in a successful maturation period.

In a perfect world, fishless cycling should try to accommodate both types of bacteria and works by taking the following steps:

3. Calculate the dosage of ammonia needed to give a reading of 3ppm in your tank. Online calculators will help, but you can work it out with a conventional one.

4. Test the water daily for ammonia and add more if it drops below 3ppm. This is a little trickier. Calculate how far you are below 3ppm and, using that number, calculate how much more ammonia to add. If I test and the level is 2ppm I will only want 1ppm of ammonia.

Doing a similar calculation to the one in step four, if I calculate how much ammonia to add to the tank based on 1ppm instead of the initial 3ppm, I will be able to bring it back up. It’s tricky, but for smooth maturation stick to this.

5. After a few days start testing for nitrite. You should see it increase while ammonia is still high. This means bacteria are starting to form. Keep adding ammonia daily and it should be gradually falling lower and lower as the autotrophic bacteria that convert it start to develop.

6. Ammonia levels will eventually be undetectable when you test, but keep adding. At this stage some people like to add a small amount of flake food to the tank to encourage the growth of heterotrophs. This is not an essential step, but still one worth including.

7. Keep testing ammonia and nitrite daily and start to test for nitrate. You will start to see nitrates rising as nitrites drop off.  At this point the tank is now safe for its first fish.

However, don’t stop adding the daily dose of ammonia until those first fish are ready to go in. If left without food for a day or so the filter can start to demature as the bacteria starve off. Keep the process up until ready to add fish.

8. Don’t go mad! When you add your initial stock it’s hard to know how many the matured filter can cope with, so don’t take liberties.

Start with one small tetra or danio-sized fish for roughly every ten litres of aquarium water.

Even this suggestion may be pushing it, depending on how well the filter has taken, so be particularly cautious and test thoroughly for the first few weeks, ready to change 25% of water daily at the first reappearance of ammonia or nitrite.