Chris Lukhaup visits China and Hong Kong to examine and photograph the elusive and protected natural habitats of most of the shrimps we see in the trade.

Of the shrimps in the hobby, most are found in South China. Until now little was known of their biotopes and living conditions and most information was gleaned simply from aquarists’ experience. Reason enough then for the Crusta10 team of Werner Klotz, Andreas Karge and myself to head east to get a privileged insight into the natural conditions of their remote hideaways. 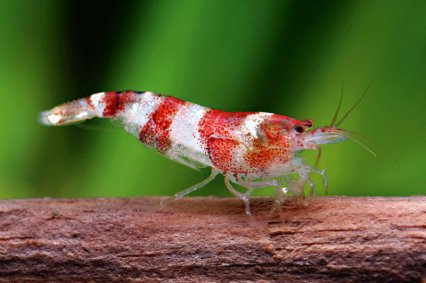 Bee, Bumblebee and Tiger shrimp, all widespread in the hobby, originate from the province of Guangdong (Canton) in South China where they live in headwaters of small mountain rivulets. Other species are also there but less interesting in coloration and/or pattern.

Many are only known from scientific descriptions, others are unknown and probably yet to be scientifically described.

The Crystal Red shrimp also has origins here, its ancestors living in a rivulet in Greater Hong Kong. However, you’ll look in vain for photographic evidence or for water parameters of this habitat!

With the help of Ping Yiu Tang, a fish wholesaler from China who was our interpreter and guide, we visited some small brooks, previously kept secret by insiders, to gather data with the help of his local shrimp collectors and to film the habitat.

We flew to Hong Kong and first visited Mr. Tang’s farm just over the border in China, where some 8,000 shrimp caught by his collectors are temporarily housed and prepared for export to Europe and Japan.

They are kept in large tiled concrete basins, and animals from different locations sitting together in one tank are not exceptional. This means that several species may be put into one bag, which makes identification difficult.

Next day we made a three-hour drive to the long-promised habitat. The rivulet we visited is among mountains near the city of Heyuan and belongs to the owners of the huge Xingfeng Jiang reservoir. This remote corner is also home to Caridina meridonialis, a Bumblebee shrimp only recently described.

Appeasing the god
However, the collector said that to catch shrimp we had to get the mountain god’s permission. So we climbed for one and a half hours through mixed tropical forest to offer sacrifice with candles, rice wine and fireworks on a centuries-old altar. This appeased the god and enabled us to collect shrimp!

After the ceremony we descended for about 30 minutes until reaching a small, clear rivulet in the forest where we could see black and white Bumblebee shrimp.

They were mainly in shallow areas along the bank and not shy — probably due to the fact that there are no predators, like fish or waterfowl. There were also stray colourless shrimp, which, though still unidentified, might belong to the group of C. serrata or C. cantonensis. The Bumblebees were C. meridionalis, as expected.

After filming and photographing we took some water parameter figures from the habitat. The brook was about 1m/39" wide, slow-flowing and had a temperature of 16°C/61°F. There was no detectable carbonate hardness and conductivity was only 12 µS, while the pH was only 5.8. The habitat therefore had all the typical characteristics of a softwater brook.

On the banks of the heavily shaded rivulet were interesting ferns and mosses. In the brook itself, with rocky to sandy ground, we could not find any waterplants or mosses. There were vast amounts of fallen leaves in the larger pools, though, and this is where we found most shrimp.

The next rivulet was also quite remote but easier to reach. Here we also found dwarf shrimp with black and white stripes, even though their pattern was a little different. The habitat was comparable to the first, but the riverbank plants seemed to grow more densely here.

The brook’s water parameters were even more extreme than those of the first habitat. Water temperature was the same, but conductivity was only 7 µS, as taken with our pocket conductivity meters. However, the pH of 5.4 backed this finding and indicated the lack of any hardness buffers. We did not find any acid-binding capacity (ABC, KH) with our drip tests, even with the double amount of water. We could say the shrimp here live in pure rainwater.

Driving coastwards to the border between China, Macao and Hong Kong we collected in a small brook, winding around large granite blocks in an amusement park. A few metres upstream we could see blueish-grey shrimp and Werner assumed they might belong to the genus Neocaridina, as many females had a broad stripe along their backs and looked very much like those exported from Hong Kong as Neocaridina sp.

However, Werner and Andreas later discovered that these had to belong to the group related to C. serrata and C. cantonensis. Later, at home, they corroborated this finding under the microscope. 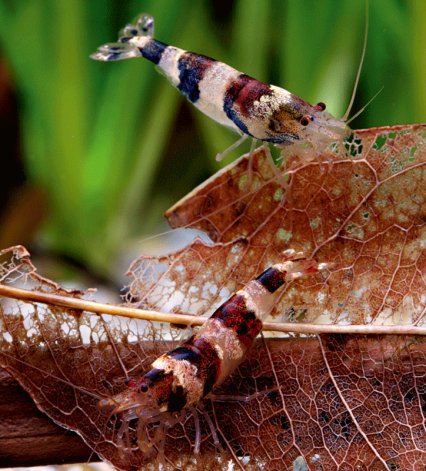 Much to our surprise, we found another shrimp species with dark and light bands. The younger animals particularly showed a very clear black and white pattern. Some were even blue and white, and quite different from those collected at Xingfeng Jiang reservoir a few days earlier.

We later found that the blue and white as well as the black and white shrimp belong to a species of the C. serrata group, which therefore makes them a distant relative of our Bee shrimp. 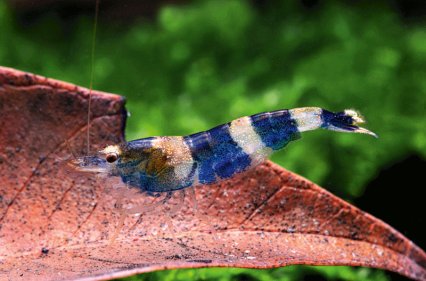 It’s possible that we have now found the shrimp that Taiwanese and Japanese breeders used to create the Red bee shrimp.

We also saw professional collectors looking for shrimp in this brook. It is highly probable then that animals from this location were mixed with other species in the wholesalers' tanks and so made their way into the hobby.

Nearly always working in full sun we were able to find shrimp in this habitat in nooks and crannies of granite rocks where they were searching for food on the sandy to rocky bottom. They were well camouflaged by their pattern and much more shy than their congeners in the forest rivulets. One reason might be because of the fish we detected in this brook.

However, the banded shrimp were less common than the uniformly greyish-blue ones. With the brook in full sun, without any riverbank forest for protection, water temperature was 22°C/72°F and significantly higher than the rivulets. However, the water was very soft, conductivity was 32 µS and we could not detect any KH. The pH was 6.0. 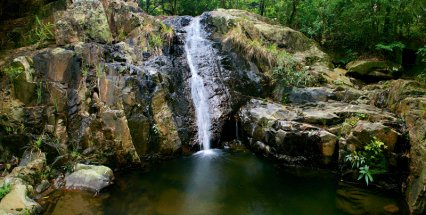 Easier habitats
After our experience in China, the Hong Kong habitats seemed a lot easier to find. Shrimp are even said to live in the small park brooks within the city itself.

Four species are currently known from there: C. serrata, C. trifasciata, C. cantonensis and C. apodosis —  and all belong to the group of C.  serrata. 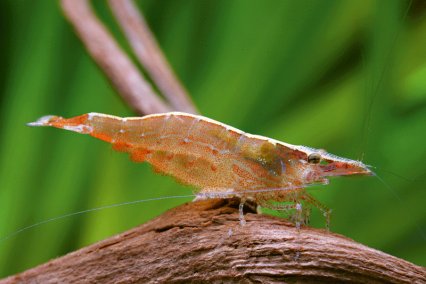 When the shrimp hobby started to boom, Bees were named Caridina serrata as it was then unknown that they might belong to a completely new species. The true C. serrata (above) is transparent to greyish or reddish brown, has irregular dark lateral bands and looks totally different to the black and white banded Bee shrimp.

It’s highly unlikely that these shrimp have already made it into the hobby. The species is endemic on Hong Kong island where it lives in small mountain brooks carrying water year round. You can find large numbers, often where a lot of dead leaves have accumulated. 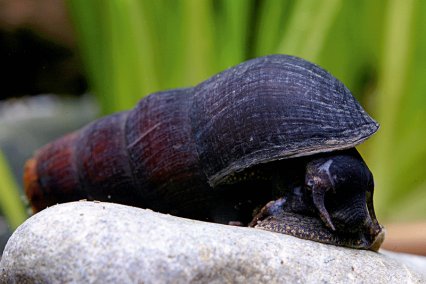 Water temperatures of these brooks were quite coolish at 18-19°C/64-66°F. A small, slow-flowing rivulet had a low conductivity of 80 µS and a pH of just under 6. Here we also found other inverts like Brotia hainanensis (above) a snail species common in Hong Kong, and a hitherto unidentified crab species. 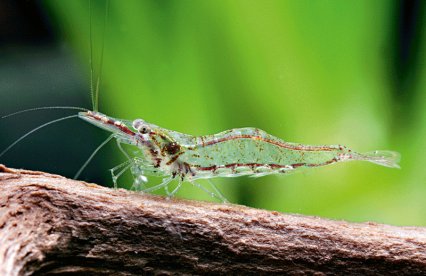 In the estuaries in the east of the New Territories we stopped by a small river in the tidal zone that had little water at this time of day. We caught a Caridina species under some rocks that science has labelled C. elongopoda, which, however, shows clear differences compared with the true C. elongopoda from Malaysia, according to Klotz and Karge. A more thorough examination might be necessary to place these animals in the right species.

We were also able to catch several Macrobrachium and a Palaemon shrimp species. We also collected nerite snails of the genus Clithon on the algae-covered rocks. These snails are variable in colour and vast numbers of their egg cocoons were the rocks. The banks were strewn with crab caves, but we did not see any crabs.

When following this brook up to the mountainous forest area the conditions changed. The water body was heavily shaded, slow-flowing and there were masses of dead leaves on the bottom. 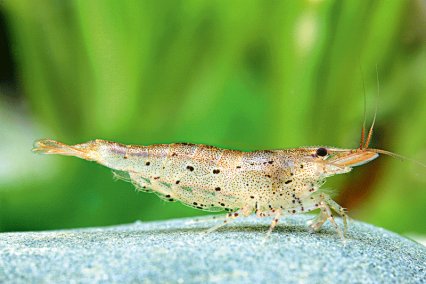 Here we found Caridina cantonensis, the most common species on Hong Kong island. Some are reddish yellow, some rather blueish with a red-brown dotted pattern. The higher you climb, the stronger the current, the steeper the rivulet’s gradient, the more shrimp can be found. They look very much like Red tail shrimp already in the hobby.

These shrimp shared their habitat with some Brotia hainanensis and a Macrobrachium longarm shrimp not yet identified. There were also fish in these waters, among them a loach species identified as Liniparhomaloptera disparis and a small goby with a bright orange dorsal fin from the genus Rhinogobius. The water up there was around 2°C cooler than in the brackish area, pH was 6.4, and there was no detectable KH.

Next day we went to the eastern part of the New Territories where Tang wanted to show us a rivulet where he used to collect shrimp and where Caridina as well as a Macrobrachium species could be found. 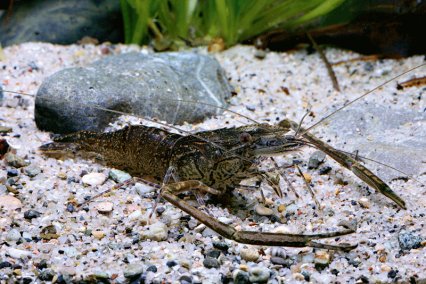 Hands as food
When we reached the brook, the longarm shrimp’s behaviour astonished us all. They were far from shy and if you held your hand in the water they literally swam towards it to see if it was good to eat. These belong to the species of Macrobrachium hainanense.

There seemed very little food in the brook, there being no other explanation for this excitable behaviour. Moreover, we could not detect any larger fish there that might pose a danger to them.

The dwarf shrimp population is very small here, the longarm probably predating on them — which would explain this remarkable phenomenon.

We followed the rivulet, which ran through rainforests with abundant vegetation as well as open landscape, upstream. On a small plateau where the brook had carved into the rock we found some smaller fish species in larger pools and many Caridina cantonensis in those pools that had large amounts of fallen leaves.

We found it astonishing that the dwarf shrimp were not in the pools with algae and mosses, but in those with rocky bottoms and lots of detritus. Parameters were pretty much like those we had taken so often during the previous days: temperatures around 18-19°C/64-66°F, conductivity between 45-48 µS, and pH values correspondingly between 6.0-6.4.

One secret too many...
Could we actually get to see the original Bee shrimp habitat? The Holy Grail itself?

Mr. Tang had helped make the arrangements for the last day of our trip,  but it ultimately proved impossible as if collectors learned he had shown their top secret location to strangers they would poison the entire brook — as they are reported to have done before.

In order to protect their interests, the professional collectors of Hong Kong seem to stop at nothing.