The Ranchu goldfish is said to resemble a Japanese sumo wrestler. Jeremy Gay visits the founding members of the Ranchu Brotherhood UK.

Regular readers will be aware that my fishy tastes could be described as eclectic to say the least. Although I love wild type fish I’m interested in the ornamental too, and when Paul Green invited me to see some Ranchu owned by a new goldfish society, the Ranchu Brotherhood, I knew I’d be in for a treat.

Ranchu are a man-made fancy goldfish variety, with a dorsal-less back, short twin tail and developing a hood all over the head. They are fairly common in the shops, mostly coming from China, but you won’t find the likes of these in shops…

According to the guys I met, real Ranchu come from Japan where they are highly prized, almost as an art form, and there they can get similar attention and sell for similar money as some Koi carp.

Attention to detail and mating the right fish is paramount to producing the near perfect progeny, and the whole hobby is conducted in a manner similar to Bonsai, with quality being everything, followed by patience and meticulous long-term dedication.

I love how Japanese aquatics always seem to represent something, and go hand in hand with ancient proverbs and techniques. The planted aquarium can be arranged to represent mountains, fields and streams. 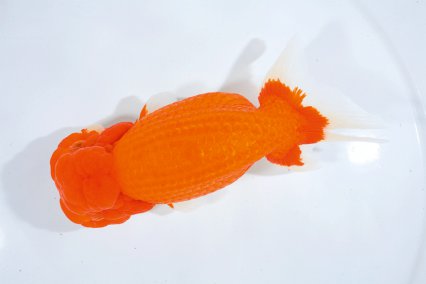 Paul said that Ranchu were originally bred along the shape guidelines of sumo wrestlers, with a big head and a heavy body. He says that culturally they represent good things about Japan and bring a sense of harmony. Called the 'king of goldfish' there, they have a big following.

The Ranchu Brotherhood was created by Belgian Geert Coppens who is quite famous in Japan. He built many relationships while there and developed the Ranchu brotherhood bloodline.

The brotherhood has members across Europe, including Holland and Belgium, with 18 members in total and four of those in the newly-formed UK organisation. They meet up regularly in the UK and with the other European members at shows. 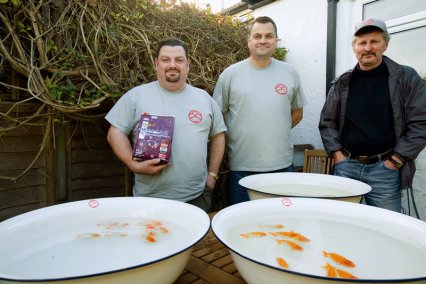 Paul Green (above centre), Craig Smith (left) and Graham Edwards (right) are the three UK founding members and on our visit were just leaving for a show in Belgium. They were to be travelling on Eurotunnel and the trip was to be a social event as much as anything. The good thing is that they can be there and back in a day.

Paul Green started keeping fish at 13. He got a job in an aquatic centre which soon took over his life and, although at first his parents wouldn’t let him have a tank, Paul went on to have 13. His first fancies were a black Telescope and a white Fantail, and his first Ranchu was a white one that arrived at the aquatic shop.

After that he started keeping all sorts of fish, from cichlids to marine to freshwater stingrays. Eight years ago he got back into Ranchu — and this time the bug really bit.

Paul admits to loving all things Japanese, although he hasn’t had a chance to go there yet. He says that one of the main fishkeeping problems in Japan is room and to be a top breeder there, and to have space to do it, you need to be wealthy. 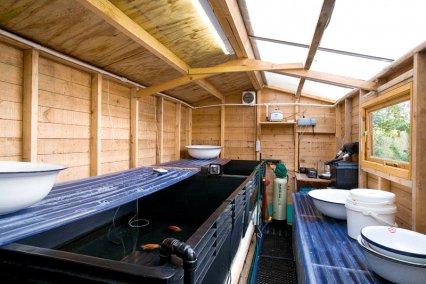 "To breed top fish you need a good eye," adds Paul, and talking to him and the other members about their fish, their lives and their other bits, they all seem perfectionists — but in a nice way of course!

One of his top tips for keeping show quality Ranchu is to never catch them in a net. Paul cradles each one in his hands, as he says you remove less mucus from the fish with a wet hand than with a net. 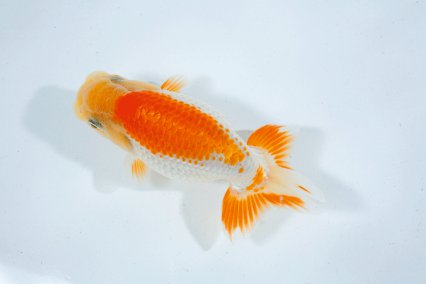 From what I learned on my visit you initially need to seek quality bloodlines, and this isn’t something you can just buy into. Craig Smith decided on Ranchu after keeping a full-blown marine reef aquarium and exchanged emails with breeders in Japan for 18 months before they would let him buy from them.

I have also heard similar stories about top Koi breeders there who won’t sell to just anyone and would rather cull fish than let inferior specimens get into circulation — or be kept by people for the wrong reasons.

Once here, different methods are used to what we would normally employ with fancy goldfish in tanks. The fish are kept in ponds, or vats, as this gives them maximum growing on and swimming room, and the Japanese breed Ranchu to be viewed from above, like Koi.

Water depths are shallow at around 25cm/10” in most cases, and I have seen this on other fancy goldfish breeder visits. Paul doesn’t filter the vats and instead understocks them, relying on large 100% water changes every 6-7 days. However Craig does, using Koi- type filtration methods. PFK recommends filtering if you are set to have a go.

All the fish I saw had access to natural daylight too, albeit through plastic covers, but daylight is key in developing rich colours.

Food is very important for producing quality fish and they are fed twice a day — and up to six times per day if growing on youngsters or preparing for showing. The Ranchu Brotherhood members prefer Saki Hikari pellets as a staple along with frozen bloodworm.

At 20°C/68°F the fish will breed and Paul says to start by choosing your best male and female for spawning. Then you can try the female with different males in future spawnings.

Paul is always looking for the best quality male and the best quality females for spawns. English lionheads can be bred to fit a breed standard, but in Japan there are no such standards and the attributes in favour may change over time.

Ranchu are now longer in the body and stronger swimmers than they used to be, which is much better in terms of fish health.

If your fish are happy and temperature right they will breed — and the members say that fish will never breed unless happy and settled. 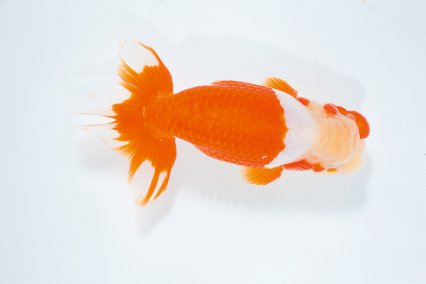 Fish in Japan are picked up by hand, inspected, and then replaced in the show bowl. Even how they swim away after being picked up counts towards points! This isn’t something practised in the UK…

The Ranchu should have a long, wide, well-developed head, a long body and a tail like swallows’ wings. The 'bracelet' on the tail — the base of the caudal peduncle — should be wide and catch the eye first with reflective scales.

As with Koi, the colour on a Ranchu can change almost completely as it matures — and with age, like many goldfish, they often become whiter. According to Paul, until a few years ago you would never see a white fish ranked highly in shows, but in 2004 a 98% white fish won the All Japan Show. Yellow heads are now favoured too.

You don’t have to show your fish if you keep top quality Ranchu, but if you develop your own lines and take the time and money that these people have, you would probably want to show the fruits of your labour too. 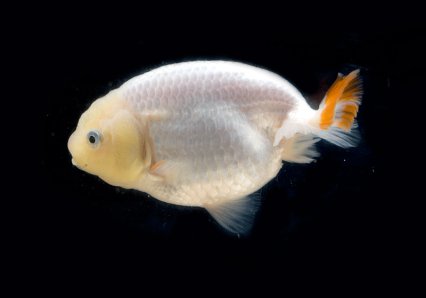 When you get hold of quality fish from famous Japanese breeders it can be quite expensive, but Craig advises that all you need to get started is a plastic water feature tub, and air stone. That’s your first little Ranchu pond! We would advise a small filter too of course!

Craig previously spent a lot of money on his reef tank and took the same route when he got into Ranchu. He advises switching your electricity to Economy 7 and says to get a water report from your supplier, as they are free on request.

The winners of the All Japan Show may be worth a staggering £15,000 and by breeding your own fish, who knows… you could create the next champion!

The founding members encourage new UK members and enjoy sharing the experience of learning and studying the fish. There is a social side too, just meeting and conversing with like-minded people, and the three members I met will all have a beer together too.

Ranchu are shown in groups according to age. A Tosai is a Ranchu in its first year. The following January 1 all Tosai — regardless of when they hatched in that first year — become Nisai. The next January they become an Oya. They remain so from then on, but referred to as young or old Oya.

If you want to contact Paul, Graham or Craig, email them at [email protected] Unfortunately, the website is not ready yet, but should be up and running shortly!

Check out some of the other fancy goldfish-related stories on the PFK website:

Why are show-quality goldfish kept in shallow tanks?

This item first appeared in the January 2009 issue of Practical Fishkeeping magazine. It may not be reproduced without written permission.