With all today's buzz about marines we are at risk of overlooking some stunning marine-like fish that don't come with all the hassle involved with saltwater. Jeremy Gay explains.

The mighty Congo river empties into Lake Tanganyika and this mass of water is almost one mile deep with, it is thought, another three miles of sediment underneath.

Like a sea it has crabs, jellyfish, sponges, and clouds of zooplankton — yet it is totally freshwater and home to nearly 200 species of cichlid that have adapted to a unique life within its boundaries.

The cichlids of Lake Tanganyika have also adapted to fill every possible feeding niche: from eating algae or shrimp through to fish and even scales and fins of other fish. They range from the diminutive Neolamprologus multifasciatus at 3cm/1.2” in length to the 90cm/35” Boulengerochromis microlepis —  which is the world’s largest cichlid.

Despite variations in size, many species reach less than 20cm/7.8” in length, making them great aquarium subjects. 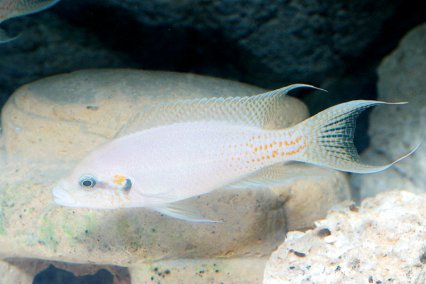 Feeding mainly on tiny  invertebrates, these fish stay close to rocks for protection, to eat and to breed.

From a group of juveniles a pair form and take up a territory which they will defend vigorously, especially when raising fry. Eggs are laid on a flat surface, usually in a cave, and when the fry hatch the parents defend their young through to adulthood.

In the case of Fairy cichlids and Julies, sub-adults may even be allowed to stay with the parents, helping to raise the next batch of fry and forming a solid family unit that will take on allcomers.

This fascinating behaviour can be observed in the aquarium, as most are hardy and easy to breed. Set up a tank with hard water, of pH 8.2 and above, and decorate with lots of rockwork.

With good water quality and regular food, the cichlids will do the rest for you, setting up home and usually breeding. 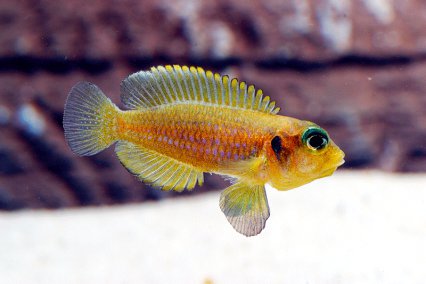 Many shell-dwelling species are adaptations of these cave spawners and include Neolamprologus ocellatus. Their caves are made up of the empty, calcified shells of Neothauma snails which are preserved by the hard alkaline water. Shell dwellers can be kept in small tanks and make fascinating residents.

These are also very popular with hobbyists, with the rock dwelling, algae grazing Tropheus, the large sedate, predatory Frontosa and the slender, open water Sardine cichlids making up the bulk of all such fish sold.

The three are very different in their requirements, despite inhabiting the same lake, so should not be kept together in the same tank.

Tropheus look and behave like Pseudotropheus from Lake Malawi. Their diet is poor, consisting of short algae strands growing from rocks and the odd invertebrate found within the algae. This growth is commonly referred to as aufwuch.

Tropheus are aggressive and territorial in the aquarium, as in nature they fight to protect their algae and to attract a mate.

The Tropheus aquarium must be large and overcrowded, with ten or more of a single species, rock piles and a low protein diet. Because of aggression levels and restrictive diet these fish are best kept alone and are regarded as quite difficult to keep.

In the lake they live at depth, in low light, where they are said to shovel up the sleeping Sardine cichlids, (Cyprichromis spp.) For this very reason the two should not be mixed in the aquarium, though many hobbyists will find that they rarely predate any fish in captivity. 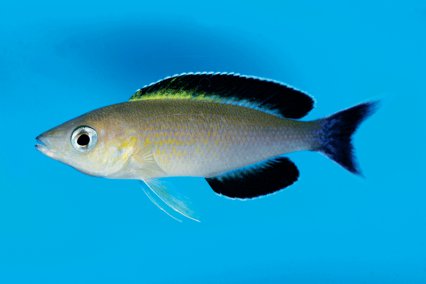 Cyprichromis (above) and Paracyprichromis don’t look like cichlids at all — instead like the pelagic marine fish that give them their common name of Sardine cichlids. They shoal in thousands in open water, going where the food goes, and are predated by larger cichlids and humans.

In the aquarium these dainty cichlids look great in a shoal in which males develop bright yellow or blue hues and display to females.

They need to be able to get out of the way of breeding lamprologines, so large, tall tanks are better. Females can be easily spotted when brooding as the mouth becomes very distended and they won’t eat.

These are the least commonly represented of the Tanganyika cichlids, yet among the most beautiful. Males create bowers — craters in the sand —  to where they entice females to breed. They need a large aquarium of their own with much open sand.

As with Tropheus, Frontosa and Cyprichromis, these benefit from many females around a single male, ensuring males always look their best and aggression is diffused between females if the male becomes too amorous.

Check out some of our other quick guides: