Jeremy Gay relates an experience with a Striped pike characin that will appeal to all those who like fish with some real bite.

There are the docile, the good, the unpredictable — and then there’s fish just born bad. If perverse enough to want to one, or even more, here’s one of the most cunning hunters you can consider.

Very few fish I’ve kept have I also seen in the wild, though Boulengerella lateristriga, the Striped pike characin, is one.

I first saw this species on a trip to the Rio Negro in Brazil, and it was a real thrill because I have always had a particular passion for this fish and its cousins.

We stopped at a lake next to the main river known as a 'terra firme lake' because it is a permanent body of water only occasionally flooded by the river and, as a result, acts as its own ecosystem.

Fish spill in and populate it, but over time fish predate each other and the balance becomes predator heavy. This one had visible piranha and Peacock bass, and, as I snuck up along the bank, I saw pike characins too.

Faced with such formidable and toothy competition however, these are not open water fish. Instead they are found in the shady margins in the corners of the lake.

I was lucky enough to watch them hunt too, which they do by emerging from the overhanging leaves and gliding arrow-straight across the surface. Propulsion is initiated by the pectoral fins, as any tail movement will alert their prey.

They manoeuvre into position, getting ever closer to prey — in this case tiny but beautiful killifish — and then, when close enough, the tail spring-loads and they strike.

In true ambush predator fashion the eye and mouth are disguised by a horizontal stripe. Even if they change direction to follow a fish they stay rigid and swing round again, using their pectoral fins. If they miss, or become startled, they use the pectorals once more to reverse back into the tree line.

This fish isn’t readily available as it is not bred in captivity, though it and its cousin, the Spotted pike characin, are available either in stock from specialists or to order via a decent wholesaler, to be delivered to your local shop.

Native to Brazil, they will be shipped in almost always as adults of around 15cm/6”. Being wild-caught and experiencing a lengthy journey, they will need to be quarantined, rested and acclimatised to aquarium life.

They may need treating for whitespot too, in case they pick it up through the stress of getting cold while travelling. 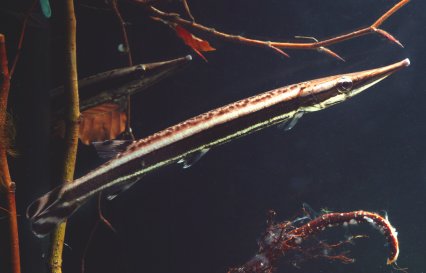 I know they are predators of small fish, and although an easy option would be to offer live fish like tetras it’s not recommended. It’s unfair on the tetras, as they can’t escape as they can in the wild.

Instead thaw out some frozen smelt, (a small dead marine baitfish) to tempt them with.

This practice will take trial, error and skill, as wild-caughts will be naturally wary. Smelt is bigger than natural prey and they won’t appreciate having a big hand attached to it either.

Try to imitate natural movement with the fish by popping it into the tank and then hiding it, leaving the fish to hunt it. Or tie on fishing line (obviously without the hook) and drag the baitfish around the tank to make it appear to swim.

For days after being imported expect them to snub food, but once they make that first lunge, through a combination of hunger and instinct, feeding will be straightforward.

I love the way they feed too. Like a predatory bird eating a fish, they use tweezer-like jaws to flip the fish into position so it’s always taken head first.

Being so elongate and with expandable stomachs, expect your pike characins to show a pronounced belly bulge after feeding. Note that it’s a good idea to insert some foodsticks for predatory fish inside the smelt for extra nutrition.

With such a cryptic-looking species it would be wrong to decorate an aquarium with anything other than natural materials. Furnish it with a fine sand, spindly bogwood to imitate branches and some floating vegetation, either from large floating plants like Water hyacinth, Water lettuce or Amazon frogbit, or with the overhanging leaves and roots from a house plant like Philodendron.

These are shy fish that only feel secure if having a retreat to reverse into, and if they feel they can move to somewhere where they seem invisible.

There’s a potential welfare issue with this and similar types of fish in captivity — and that’s protecting those delicate jaws.

If scared they will fly across the tank and bash them into an unseen aquarium wall. Plan ahead and glue in structured three-dimensional backgrounds, such as Juwel or Back to Nature products, to both back and sides of the tank.

Get a wide tank too, and include overhanging plants as this will not only give the effect of a true slice of lake but also prevent damage to the fish and make them feel more at home. It will look great too.

Filtration should be adequate though not fast flowing, so use an external filter, but deflect the water away and set the temperature to the upper 20°sC (about 81°F).

This is a blackwater fish, making the Rio Negro and its lakes its home, so use soft water, ideally RO, and stain with wood, leaves, peat or blackwater extract.

In that Brazilian lake we saw everything from those small killies and tetras to Peacock bass and piranha, and, although biotopically correct, the small fish must be excluded as they are natural prey. The Peacock bass grow huge and piranha will eat pike characins.

Other fish that shared the habitat included angelfish, severums, Festive cichlids, Chocolate cichlids, banded Leporinus and Laemolyta taeniata, the Striped headstander. They would all make good tank mates in a large community.

If going non-biotope avoid any boisterous predators that will out compete them, like snakeheads and arowana, or tough cichlids that will steal their food and make their lives hell.

Because of the nature of these fish, the tank should be set up around their needs and fishy tank mates matched accordingly.

Can it be bred? Not that we know of. All are imported.

Similar species: The even nicer Spotted pike characin (Boulengerella maculata) – pictured below – which can be kept the same way.

Price: As the Striped pike characin is not readily available expect to pay £30-45 for an adult. 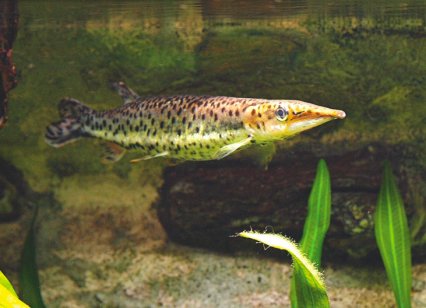