Do you fancy keeping a ravenous, flesh-crazed beast but lack the room? Maybe the Bucktooth tetra tips the scales your way, suggests Nathan Hill.

South America is full of sharp-toothed, devil-fanged predators that would make even H P Lovecraft shudder. There are the piranha, freshwater barracuda and Tiger characins featuring among other nasty pieces of work.

However, there are also more specialised kinds of carnivore — and that’s where Exodon paradoxus, the Bucktooth tetra, homes in.

This fish is not a predator in the technical sense. Rather, like the gill munching candiru, Exodon are a parasite, eating away at their prey but not benefitting from its outright death. They choose to eat fish, but strip off only the surface layer of skin. To be exact, they are scale eaters.

The lepidophage (scale eating) lifestyle is nothing new and not only Exodon exhibit it. In fact, there are at least another five South American characin genera that all scratch a living the same way. There are even cichlids that live this way — and that behaviour has independently evolved in at least 12 lineages.

Not for the community!

The way Bucktooths feed is a sight to behold and one of the reasons keepers are initially attracted to them. Offered a block or cube of food in the aquarium, they rapidly form a feeding ball, like bees swarming about a hive, with each fish dashing to the centre of the frenzy to get its share.

In the aquarium, Bucktooths are useless community fish. Tank mates are seen as swimming organic vending machines, there to be tucked into at any time, until stripped down like corn off of a cob.

You’ll not turn that behaviour off either. Exodon are as hardwired to eat scales as cockerels are to crow at dawn. Attempts to wean them solely on to flakes and bloodworm in the hope of ending their bloodlust are doomed.

Wild Bucktooths don’t just supplement their diet with scales, it’s the core of their menu. When analysed, wild fish are found to have an average of 88% scale in the belly, alongside about 10% terrestrial insect and the tiniest taste of green stuffs.

These scale-feeding antics have even led to another morphological and behavioural trait – left or right-handedness.

Viewed from underneath, an Exodon head will permanently tilt ever so slightly to either left or right and this relates to the way they attack their victims. Left-handed (or mouthed) Bucktooths attack the right flank of other fishes, snapping at the scales before glancing away to the tail.

This is different to the way cichlids feed on scales. A cichlid will creep up from behind, at an angle, and glace forward, snatching a scale as it does.

The Bucktooths are far more gung ho, directly side-ramming their prey in a far more ferocious and direct attack.

They’ve even evolved special teeth for the job — hence the name. Their descaling, cuspidate denitition carries an extremely pointed tip for getting underneath that troubling outer layer of fish to yank away what’s beneath. They don’t even leave with a mere mouthful, instead tearing off scales and gorging on them as they sink and drift to the bottom. 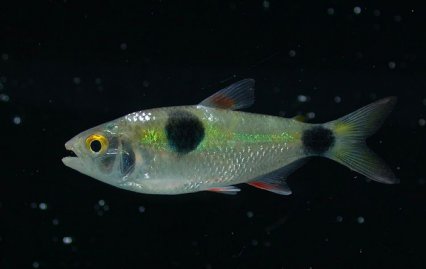 How to keep Bucktooth tetras (picture above by Jonathan (Jon) Armbruster, Creative Commons)

Setting up a tank for Exodon is easy enough, it just needs to be big and the numbers of fish high. In smaller numbers, with aquarist arguments raging over whether eight or ten individuals is the cut-off point, they will savage each other. At least a dozen must be considered.

That means having a decent-sized aquarium. Although wild fish hit a good 15cm/6” or so, tank-reared individuals rarely get past 10-12cm/4-4.7”. That may not sound huge, but for a stocky fish with lots of energy, that equates to much room.

Don’t consider a tank under 120cm/4’ long, opting for a longer one if you can.

To create a biotope effect, emulate the wild habitats which are sandy riverbanks and floodplain lagoons. Here, Bucktooths inhabit beach regions in fair-sized congregations at the high water mark. It’s much more rare to find an Exodon anywhere that plant growth is abundant.

That said, they seem to thrive in heavily-planted tanks, though they don’t spend any time nestling among such an underwater canopy. They don’t damage plants either, so are a good choice for an unusual, aquascaped parasite tank. Failing that, a sandy base with some sunken wood and smooth stones will easily suffice.

Wild fish found alongside Bucktooths are numerous and mostly feasted on! There are larger Moenkhausia, Aphyocharax species, Prochilodus, Characidium, Pterodoras, Loricaria and a host of others — none of which I’d ever recommend trying.

Some keepers have reported limited success with piranha species, though this is a delicate arrangement at best. Scale-less catfish have been tried, and even active fish like Anostomus. On the whole these have failed and it’s too volatile to try Exodon with other fish.

Feeding is easy enough. Though scale eaters by nature, they will thrive on flake, bloodworm, shrimps, fish flesh, Mysis and krill. Some dried pellets in the mix never hurt and neither do any insects you may catch around the house. That buzzing bluebottle may be bugging the life out of you, but it’s a prize snack for an Exodon.

Even Amazonian locals have found a use for these fish.

When faced with the chores of filthy pots and pans, cutlery and crockery, a quick immersion into Bucktooth-infested waters works wonders in getting shot of those ground-in scraps of food, Brillo pad style.