We take a look at the fabulous Potter's angelfish which, with the right care, makes a stunning addition to the marine aquarium.

Reef safe: With caution. This species may nip at clams and LPS corals.

Diet: Will accept all the usual frozen marine fare - try it on the frozen angelfish food preparations like those made by Ocean Nutrition. Include Spirulina in the diet. Feed 2-3 times a day.

However, it is a rather shy, retiring species and as such, it should not be kept with over-active tankmates or fish likely to bully it. Don't keep it with other dwarf angels.

Provide it with a choice of hiding places. This fish is only recommended for mature systems containing plenty of live rock for it to graze on. 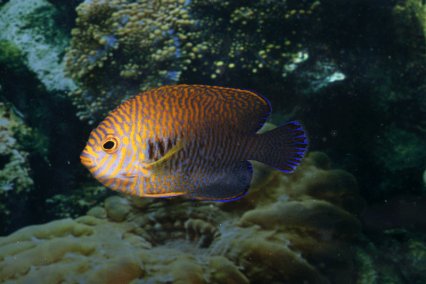 Ensure this fish is feeding before you buy it, as newly imported specimens can be reluctant to eat initially. Find out how long the fish has been in the shop - a minimum of 10-14 days is best, as it will have given the fish some time to adjust. If it's any less than this, ask if you can pay a deposit and reserve the fish at the shop for a few days.

It must be said that this isn't the easiest dwarf angel to keep in captivity, and there are numerous reports of them keeling over unexpectedly. However, there are several key secrets to its success: size of tank (large); a mature, well-maintained system; plenty of live rock for it to graze on and provide with plenty of cover; compatible, non-competitive tankmates – and ensure that any specimen you buy is well-acclimatised and feeding.

This angel is mimicked in its natural habitat by the Potter's leopard wrasse (Macropharyngodon geoffroy).