Love or hate the concept of designer colouring, there is burgeoning interest in selective captive breeding of mutations of Percula clownfish. Some striking morphs are now beginning to appear in the hobby.

Add to that the fact they are funny and bright and have a bizarre sex life and there’s no wonder Amphiprion percula enjoys celebrity status in the marine aquarium.

The ‘true’ Percula is found in shallow coastal waters in the Western Pacific — especifically around the Great Barrier Reef, up to northern New Guinea and east to Melansia’s Solomon Islands.

A. percula itself is a pomacentrid, or damselfish, but has evolved to live among the stinging tentacles of sea anemones and clownfish newly introduced to them have been seen ‘nibbling’ the tentacles. Some scientists believe they do so to stimulate the anemone’s production of mucus, which the fish then use as a chemical ‘cloak’ to avoid being stung!

Is this a mutualistic relationship or a commensal (one-sided) one in favour of the clownfish? There appears benefits for both species: the clownfish gaining protection from predators while living within the stinging tentacles, and the anemone is defended from polyp feeders by their feisty lodgers.

The Percula clown will accept a wide variety of anemones in captivity and will even come to associate with the Caribbean Condylactis species to form an unnatural partnership.

Most natural choices include Heteractis magnifica, H. crispa and Stichodactyla gigantea — species with which it associates in the wild. While the anemone-clownfish partnership is mesmerising, clownfish can survive without them.

They have exacting requirements for water quality, sufficient water movement and lighting. Too many anemones meet a swift demise as these standards aren’t met by those seeking to recreate the clownfish-anemone relationship in their aquaria.

While only growing to around 8cm/3.2” even a single pair will require room — at least 100 l/22 gal aquarium. They can be quite territorial, especially if among the first to be introduced to an aquarium. Subsequent tank mates may be bullied.

They can be intolerant of other clownfish species and even others of their own kind if they are established. In fact, trying to add more Percula clowns to an established pair or small group frequently results in squabbling.

Lifespans of more than a decade have been recorded in captivity while feeding is very straightforward. They are planktivores and will readily accept a wide variety of frozen and live feeds as well as flakes and many kinds of pelleted feeds.

In the wild the Percula is found within its anemone host, either in breeding pairs or small groups — with a breeding pair and several non-breeders which are effectively non-functional males!

Onset of breeding is characterised by cleaning a space for egg laying. The male then chases the female before eggs are laid. The pair will guard them, fanning them to keep them oxygenated. The eggs will take a week to hatch and the fry dispersed as plankton.

The Percula clown is regularly captive bred and although some purists might claim that coloration of tank-raised fish is inferior to wild counterparts and behaviour of captive specimens is less ‘natural’, experience shows that captive-bred specimens experience less stress and disease.

Percula clowns are susceptible to many common ailments, including Cryptocaryon and Oodinium, but Brooklynella hostilis, a ciliated protozoan, is particularly prevalent in wild-caughts. It is often known as ‘clownfish disease’, although other groups can be affected and it can be difficult to treat.

Generally, this species is rather sensitive when wild caught. Captive-bred Percula clowns shouldn’t have the same disease issues and it’s worth the effort, and slightly greater expense, to obtain these instead.

However, any new stock, captive-raised or wild-caught, should be quarantined first and providing optimal water quality is very important in minimising potential health problems.

There are several colour variants of these fish. The ‘Melanesian’ Percula clown has different markings to the ‘Queensland’, more obviously the ‘black’ colour morph which is particularly highly sought after and commands a hefty price tag.

With so many morphs appearing, before too long there may be a variety of Percula clowns to rival perhaps the mutations as seen in Royal pythons and Leopard geckos in the reptile hobby! 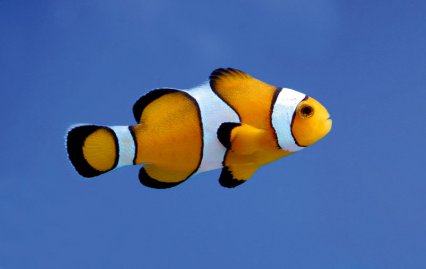 There’s confusion in hobby and trade between the ‘true’ Percula clown (Amphiprion percula) and ‘false’ (A. ocellaris) which is also known as the Common clown. ‘Percula clown’ is often misleadingly used as a seemingly generic term and interchangeable between the two species.

Biologists often refer to them collectively as the ‘ocellaris/percula complex’, which reflects opinion that we can’t yet really be sure about the relationship between these ‘species’.

Recent genetic analyses are confusing. One research team actually suggests that there may be three, not two, species within the ‘complex’.

Distinguishing between the two traditionally accepted species is not always easy.

Considered ‘sibling species’ — similar but not interbreeding — A. percula and A. ocellaris share physical features and may look virtually identical!

A. ocellaris tends to have a lighter orange coloration than A. percula. Many sources claim that the Percula has more pronounced black bands between the white and orange sections, but this isn’t always the case and can’t be considered definitive.

Many specimens of A. percula have no black bands and overall there is a huge variation in this feature, but it’s safe to say that A. ocellaris never has thick black bands.

More subtle defining features can also be used, but even they may show overlapping. A. percula, for example, usually has ten but occasionally nine dorsal fin spines, with A. ocellaris having 11, sometimes ten. The height of the anterior (front) dorsal fin is a reliable indicator and in the ‘true’ Percula is lower.

Using a combination of all these traits is the best way to distinguish between the two species, rather than relying solely on one characteristic.

Is this fish easy to breed?

It is when compared to most other marine ornamental species! In fact, once a pair is established and conditions are optimal, they may spawn more or less continuously in the aquarium.

The difficulty arises with feeding the tiny pelagic (open water) larvae. They initially require live rotifers, which in turn must be fed on phytoplankton — and these can be quite involved to culture. However, it’s possible to raise the fry to adulthood – although it does require dedication!

Do clownfish need an anemone for breeding?

The relationship between clownfish and anemones is, in captivity, facultative — meaning it’s not essential to live together. Although in the wild, clowns are found exclusively with their hosts, both fish and anemone can survive perfectly well on their own in the aquarium and it’s not essential for clownfish to live as symbionts for captive breeding.

Many commercial breeders prefer not to keep clowns with anemones, opting instead to use fairly minimal bare tanks, each having a removable tile to be used as a spawning substrate.

How can I ensure I have a breeding pair?

Obtain a pair of juvenile clowns at just over 1cm/0.4” in length and allow them to establish a hierarchy or pair bond naturally. They will both be males as juveniles, but one will eventually become female.

How can I tell the male and female apart in a breeding pair?

The females are larger than the males.