Opera of the Phantoms With rocks that shine and turbulent waters that carry men to their deaths, explorer Ivan Mikolji looks at the habitat of one of our favourite catfish.

“Ivan is an explorer with a gift for prose, and a writer who I try to encourage to submit to the magazine as often as I can. ‘Opera of the Phantoms’ ranks as likely my favourite Ivan contribution to date, a tale of an aquarium favourite — the Blue phantom pleco — in a near-alien landscape that only he can explain with such finesse and clarity.

As well as gifted writer, Ivan has prodigious command of a camera. Below are just some of his fabulous images, and to find more of his work, I urge you to take a look at his website at mikolji.com… but only after you’ve read this fantastic piece on the strange home of these marvellous fish. 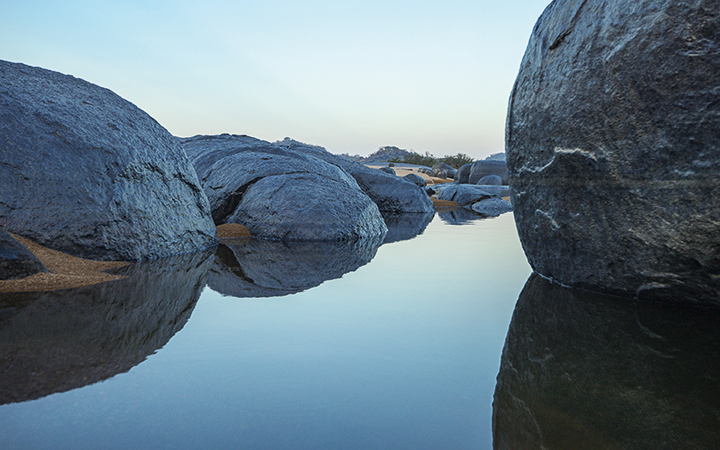 We turn on our flashlights and walk upstream on the Orinoco river bank. It is 4.30am and I know that I am going to document one of the most spectacular places on Earth.

Maria, Alipio and I are carrying the heavy photo gear, and the dry, soft sand of the riverbank sinks with our weight, making it hard to walk. They follow me as I choose my spot to photograph the sunrise. It is hard to describe the magnificence of this incredible, cosmogonic place.

This spectacular place is the Atures Rapids, home of the undescribed Blue phantom pleco, Hemiancistrus sp., or L128 to collectors.

There are two predominant types of terrain here: sand and rock. The plutonic granite rocks are approximately 1,550 million years old and are sometimes referred to as ‘Paraguaza rapakivi’ granite. The locals call the rock ‘laja’, which is pronounced ‘la-ha’.

The rushing river that flows through, laden with abrasive suspended particles, has water-blasted the rocks for aeons, smoothing them out until they look like dark, chromed metal.

So many people have lost their lives, drowning in these strong white waters. The stories are abundant, and the few that venture in the areas of strong current with their boats are highly respected. 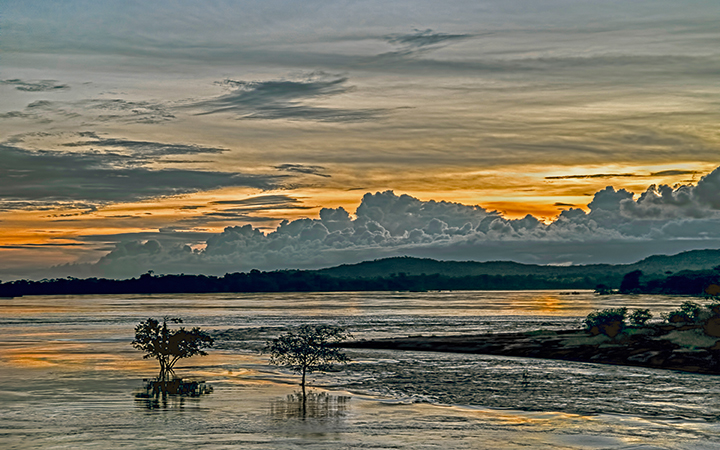 To catch a plec

As we wait for the sunrise, Maria and Alipio tell me how they fish the Blue phantoms for the aquarium trade. They start by tying a long rope around Alipio’s waist — the other end of the rope is held by two other people. Maria then hands Alipio one end of a long seine fishing net and holds on to the other end. At that moment, Alipio jumps as far as he can into the rapids, holding the net as he is dragged downriver by the water current.

Once the net is totally stretched out, the two men pull Alipio out of the water 20 metres down river using the rope tied around his waist. Maria pulls the net out of the water at the same time as Alipio, making it drag over the smooth boulders and catching the Blue phantoms that live on them.

Although the chosen fishing spots are not where the water current is strongest — if the rope breaks, Alipio would be dragged downriver, which would be extremely dangerous.

Some spots have calm, slow water, but they catch many more catfish where the water is running. I guess the Blue phantoms prefer more oxygenated and faster-flowing water.

As the sun starts to rise, the morning sky turns blue, which creates a curious visual phenomenon as the polished rocks reflect the sky. At the same moment, the banks of the river start filling with the song of thousands of birds that are awakening.

Now we have the surround sound of the Orinoco River rumble on one side and bird songs on the other. We stand up and head upstream to a new location. 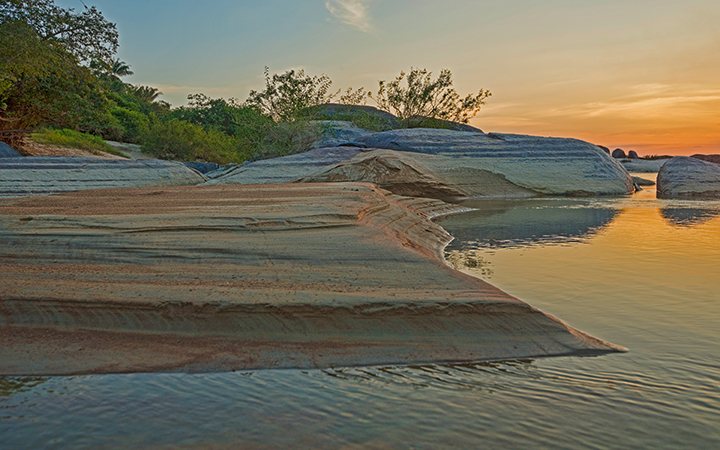 It is late February, the driest time of year, and the waters are at their lowest level. In some spots, the boulders and sand have lines that show how the water levels have dropped this year. In some places, the water rises and lowers five or more metres.

It is important to know that there are two ways of viewing an aquatic habitats climate: the hydrological periods and the climate periods. In this end of the Guiana Shield, we have a bimodal climate regime consisting of a dry period and a rainy period.

Curiously, the river has a similar hydrological period, but it is not exact with the climate periods — they do not align perfectly. For example, the Orinoco River water level here rises way before it starts raining. The locals say, ‘It’s raining down under’, which means that it is raining down south in the headwaters of the Orinoco, hundreds of kilometres away. Fish migration and breeding behaviour tend to be influenced by the falling or rising water hydrological periods, while we still think that they are influenced by climate periods.

It is a treat that, once a year, nature lowers the water levels in the river and allows us to see, walk and explore the Blue phantom pleco’s biotopes. As I walk on the river’s edge, I notice that the dry sand way up on the bank is much whiter and thinner, almost like a powder, and it starts to gradually turn browner, darker and coarser down the slope to the low river water level. The sand contrasts starkly with the dark, chrome-coloured boulders.

We find a new spot with a nice view of the rapids. Maria tests the water and takes notes: pH 6.3, temperature 27.3°C. The only aquatic plants that we found are of the Podostemaceae family. These greenish-yellow plants attach themselves to the boulders near the water surface. You can only find them alive approximately from June to November when the Orinoco River water level stays the same for a couple of months. When the water level lowers again, they dry up under the scorching sun.

The Orinoco River water in this area is not very clear. It has a light-brown tinge, and you can see into it maybe some 10cm before objects become obscured. Underwater photographs taken in silty rivers do not come out well, so we usually capture the fish and place them in a specimen aquarium with clear water. Specimen aquariums are very handy in these situations where the water current is too strong or dangerous. We also place a ruler in the specimen aquarium for future scientific reference. 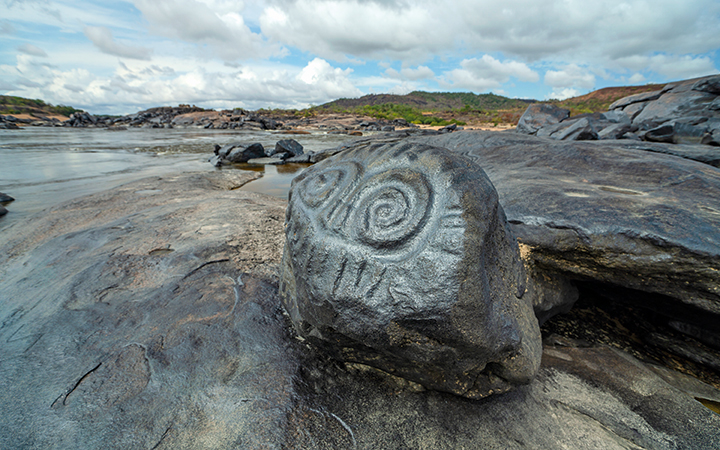 Two more things make the Blue phantom pleco’s habitat all the more special. The first one is that, in some areas, the chrome-hued rocks are filled with some of the world’s largest rock art, referred to as pre-Columbian petroglyphs. These ancient 2,000-year-old man-made markings become the habitat of the Blue phantom plecos in the rainy period, where they live, feed and reproduce amongst them.

The other special thing I found was a tree of the Myrtaceae family, most likely belonging to the Psidium genus. This tree, thought to be only terrestrial until now, is the only species of plant that survives below the mid-water level of the Blue phantom’s biotope. It lives for up to eight months in total darkness, submerged deep when the water levels are high.

The trunks are black and smooth, showing the same water-blasted surface that the rocks show, and the whole trees are also shaped by the direction of the strong, continuous water current, making them look like plants from another planet.

Their roots curl around the smooth rocks, which is the only way to keep them anchored. In the dry season, when not submerged, they shoot small green leaves out of black stems. Sometime later, they produce a small fruit which resembles a miniature but very sour guava.

Most of these trees are covered in old fishing lines and hooks. Once the water levels rise, the cycle starts again. Submerged in darkness, they lose their leaves and become part of the Blue phantom pleco’s home.

In the present, we are collecting voucher specimens of the Blue phantom pleco for scientific study. Hopefully, we will be able to find out if it really is a new species or just a colour variant of Hemiancistrus subviridis.

We stay to photograph the magnificent sunset and watch the fishermen catch large Payaras (Dogtooth tetra) in the strong water current. The place is magical.

This article first appeared in the July 2019 issue of Practical Fishkeeping. All images copyright of Ivan Mikolji. 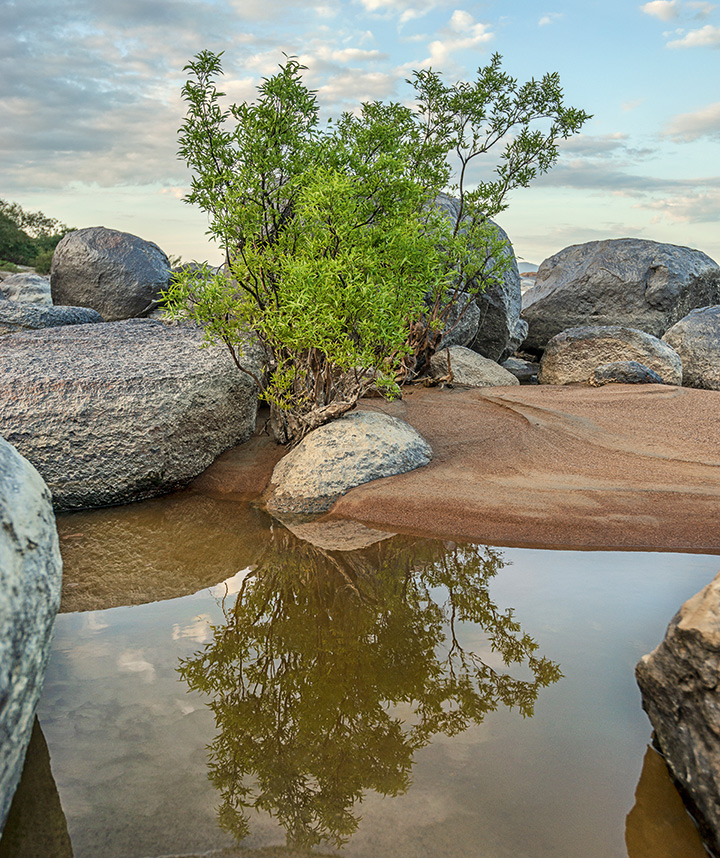 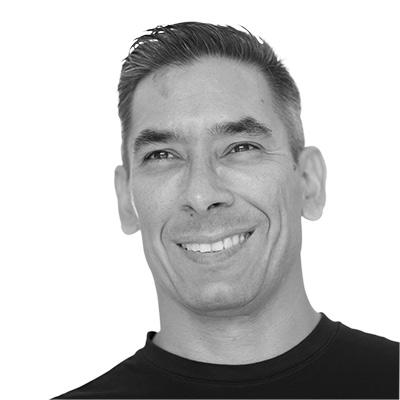 Ivan is a Venezuelan explorer, author, and documentary maker.

At the core of his ethos is his mantra: “You cannot preserve something that you don’t know exists.” That’s an ethos he has dedicated his career to, with over a hundred expeditions and more features in nature publications than we can count.