We've done the unthinkable! We've advocated using a goldfish bowl! However, James Starr-Marshall assures us that no fish have been involved in this unusual kind of set-up.

When PFK editor Jeremy Gay said he had an aquascaping project for me, I was surprised to be handed a traditional goldfish bowl. In view of all we’ve done to ensure fish are kept correctly, it seemed strange to be holding an object causing so much trouble in the fishkeeping world.

In the 1980s real concerns were raised about the ethics of keeping fish in such containers and led to several campaigns.

By the 1990s most aquarium shops had stopped selling them and the goldfish bowl had become a symbol of bad fishkeeping practice.

The miskeeping of fish did not end with the goldfish bowl and there are still irresponsible fishkeepers around. The goldfish bowl in itself is not cruel —more so the suggestion that in it we should keep a fish that potentially grows to 30cm/12”.

There are obvious issues when using a goldfish bowl as a home for aquatic life. The traditional one is a 12” glass sphere with an 8” diameter opening. This gives a total volume of just 13.5 l/3 gal, placing it on the cusp of the nano and pico categories — and that’s a particularly challenging arena in which to operate.

The unusual shape means that so small a surface area is in contact with the air that gaseous exchange will be about half that of a tank with a full-width opening. Even with a filter I believe the bowl is unsuitable for all species of fish — and even any shrimps should be stocked with caution.

These limitations considered, there’s still a number of ethically sound projects to keep a hobbyist entertained, especially if interested in creating plant-only systems.

As an aquascaper experienced in nano and pico aquaria I couldn’t resist the temptation to install as full a 'scape as I could.

The challenge of creating an aquascape within a spherical aquarium became particularly apparent as I started to try out some hardscape materials.

The tiny footprint, when compared to the full width of the bowl, meant it was difficult to occupy the outer reaches of the available space

My attempts with rockwork resulted in adding ever more sand to ensure a larger base area until the bowl was almost half full of substrate and I had no usable height. 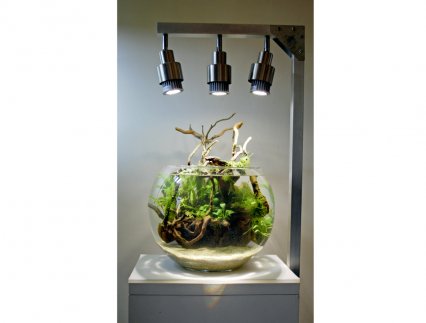 I decided to postpone using rocks until I had the time and epoxy putty to build a formation and instead experimented with wood. With careful selection and a hacksaw I tailored a nice piece of Redmoor root so that it would rest comfortably on the base of the bowl.

The rest of the wood branched and twisted out into the widest points using a good portion of the space in the bowl.

Happy with this arrangement, I was delighted to realise that I could tie all my chosen plants to the wood outside of the bowl, alleviating the need for any fiddly planting through such a small aperture.

How I sustained the system

For the plants I opted for a TMC CO2 set, Tropica Premium fertiliser and a DIY LED lighting rig I made from an old spotlight fitting.

The whole lamp holder assemblies were unbolted from the ceiling mounting plate. They could then be rebolted to an ‘L’ shaped arm made from two pieces of square aluminium tube.

Making the lighting is not difficult if you have reasonable DIY skills, but any electrical work must be checked by a qualified electrician.

By using three separate fully articulated LED lamps it was possible to direct sufficient light through the narrow opening of the bowl and the gaps in the wood to satisfy the plant’s needs.

The cabinet was also a home build made entirely from MDF (medium density fibreboard) and the door was suspended on magnets alone, negating the need for fitting hinges.

This approach, if planned well, will save money and needn’t cost you anything in aesthetic value either.

How I set up my goldfish bowl aquascape 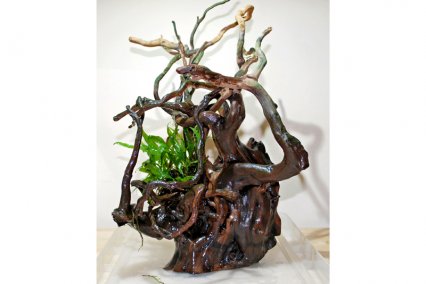 1. Microsorum pteropus 'dwarf' was tied at the back of the wood with a length of fine fishing line. I was careful not to damage the leaves of the plant during tying. 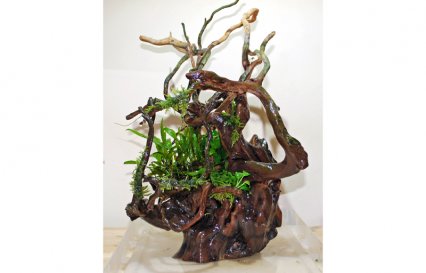 2. Anubias nana 'petite' was added. There was no need to tie this plant as its roots could be threaded through the gaps in the wood. Vesicularia dubyana 'Christmas' was tied in four places. Single strands were used to create highlights in the foreground. 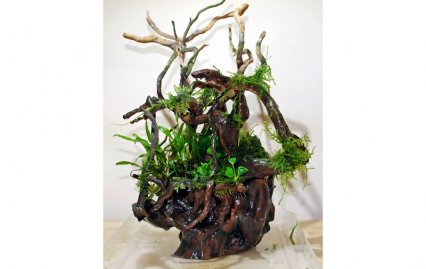 3. A small patch of Taxiphyllum sp. 'Spikey' was tied at the bend of a main branch. Try to tie moss in a thin layer to ensure healthy growth. The final plant species was Vesicularia ferriei ‘weeping’. A large patch was tied at the back with a few strands at the water surface.

The planted wood was placed toward the back, in a 3cm layer of inert sand. The bowl was slowly filled until about 1” from the top, then three small moss-covered rocks were placed at the base of the wood using long tweezers.

The lack of filter means the aquarist has to do a lot of extra work — the lack of fauna doesn’t mean you can skimp on water changes. In my previous filterless set-ups of this size — and smaller — it’s been necessary to do daily water changes of at least 90%.

These must be done before the lights come on and preferably before the CO2 is started. Dosing of fertilisers can take place once the tank is filled.

Daily maintenance may require some custom tools. Due to the small opening of the bowl and complexity of the wood it wasn’t possible to get a hand in there. I used a 30cm/12” section of rigid airline tube with a filter brush pushed into one end and a toothbrush head on the other. A pair of long tweezers and 25cm/10” scissors with a double bend in them are used for pruning.

Costs at a glance

When working on small filterless tanks use plants that have already been growing submerged rather than new ones in their terrestrial state. This ensures a faster grow-in period and fewer algae issues.