Julies are Tanganyikan cichlids with some very liberal attitudes towards relationships. Ad Konings reveals how a dominant female's eggs can be fertilised by two suitors.

At least one representative of the Julidochromis genus is found almost everywhere around Lake Tanganyika — as long as the site includes rocks. Not only are they ubiquitous, but females can be bigger than males and will preside over their sexual mates.

It’s in those species that the female of a breeding pair is always the larger individual and usually considerably more so than the male. The female in couples, or trios, of J. ornatus and J. transcriptus can also be larger than her mate(s).

Although Julidochromis species are thought monogamous substrate brooders, in that one male and one female care for offspring, close examination in the wild has revealed far more complicated breeding strategies.

When there’s a visible size difference between male and female it usually means a difference in parental care.

The female is usually the most defensive of the partners when protecting her young, but this appears not related to sex because in the case of J. marlieri the male provides the best care. So the smallest parent usually ends up caring most.

With J. marlieri this has led to a large female presiding over the combined territories of two males. She lays eggs in either male’s territory and he does most of the guarding. In some cases even a fourth, smaller, individual was present in the breeding cave to help defend the fry.

The case of J. ornatus can be even more complicated because it’s sometimes found in pairs, sometimes with a male a little larger than the female, but more often in pairs where the female is somewhat larger.

Trios, one female and two males, appear common too and here one male is usually larger than the female while the other is smaller.

Experiments in the laboratory with J. transcriptus, which in shape and size is very close to J. ornatus, revealed that the female of a trio had discovered a way of having a single clutch of eggs fertilised by both of her male admirers!

In narrow, wedge-shaped spawning caves not all members of the romantic trio could access the narrowest, deepest points. In such cases the larger, alpha male stayed in the wider end of the cave while the smaller, beta male resided at the opposite, narrower end. The female was in between the two. 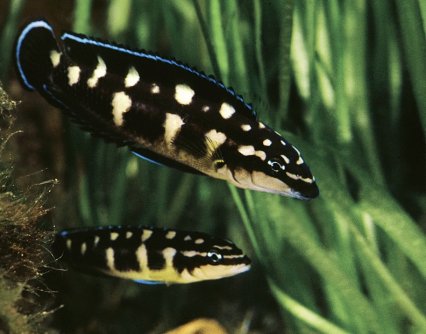 When it came to spawning the female would deposit eggs at either end of the cave which were then fertilised by either male.

The alpha didn’t like it but there was little he could do since he was physically unable to get into the shallow end of the cave.

There are benefits all round however. As the smaller male would take most care of the offspring, the female had more time to feed. The beta male could spawn without having invested energy in becoming an alpha male, although he may eventually grow to become one.

The alpha male’s benefit is at first sight less clear, because he is losing out on siring half the brood, but because the beta male will also guard his particular offspring — once the fry move about there’s no way he can make a distinction — there will be a higher survival rate for his offspring.

The alpha is the larger individual of the trio and would naturally leave the everyday chores of offspring care to the smaller female, but in the case of J. transcriptus and J. ornatus, the female found a way to offload that task to a smaller beta male. 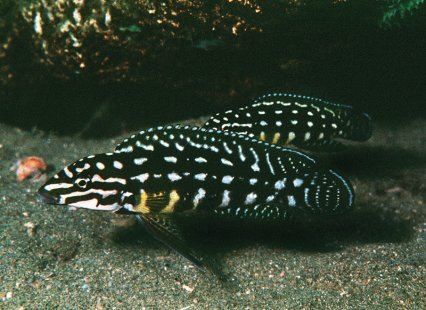 Quirks of the species

Julidochromis marlieri: This has an interrupted distribution in the northern half of the lake and is found at Magara in Burundi, at Luhanga (pictured above) and at the Kavala Islands in the Congo. It may also be found along the Congolese shores between the latter two sites.

This species also has a restricted range in the south. Although it occurs at Cape Tembwe, it hasn’t been seen further south along the Congolese shore.

It’s more common in the south-eastern part and found between Isanga (Zambia) and Kala (Tanzania). Interestingly there are J. marlieri populations at Samazi (Tanzania), and at Halembe there’s a beautiful form with orange dots on a black body which consist of small individuals with a colour pattern resembling J. transcriptus. This pattern, however, includes a black bar below the eye, a characteristic of J. marlieri and J. regani, and these populations are seen as a dwarf form of J. marlieri. 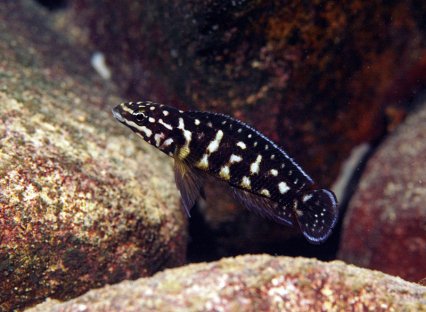 The same is true of the form at Katoto (Zambia) and that at Kombe (Zambia) which is better known as ‘Transcriptus Gombe’ (pictured above).

J. transcriptus or J. marlieri: Julidochromis species are difficult to define and I believe that in many instances the colour pattern and intensity of a particular individual depends on the type of habitat it’s going to be found in.

J. marlieri and J. regani have an overlapping colour pattern and it’s sometimes difficult to assign a specimen to one or other species, except by assuming that vertical barring is restricted to J. marlieri.

In the sediment-free rocky habitat one usually finds dark-coloured J. marlieri or J. transcriptus, but where the rocks are covered with sediment you are more likely to find lighter coloured J. regani or J. ornatus. Descend along the rocks to deeper regions and you’ll notice a vertical gradient in the intensity of the black pigment — in the upper layer light-coloured Julidochromis and in the deeper areas dark ones.

For years I’ve referred to Julidochromis forms, irrespective of size, as those having vertical bars and markings on the cheek, as J. marlieri, and those without cheek markings as J. transcriptus. However, some hobbyists have been very reluctant to accept such a classification concept.

In the hobby we only see variants exported from the lake and it’s difficult to appreciate the forms intermediate between these extremes in size. This would mean that the 'Transcriptus Gombe' is a variant of J. marlieri, as is a light form found at Katoto.

The dwarf forms I found at Halembe and Samazi would have been called 'Transcriptus' if they had been available to hobbyists, but taxonomically they are better referred to as small representatives of J. marlieri.

J. transcriptus: This was described from the population found at the north-western end of the lake between Luhanga and Pemba (Bemba). Pierre Brichard (1978) found light-coloured and dark-coloured forms, and that a yellow-coloured variant without vertical barring occurs in adjacent areas. This was exported as J. ornatus in the 1960s and 70s.

If J. transcriptus from the type locality is compared with the small J. marlieri forms found in other areas (Halembe, Samazi, Katoto and Kombe) there’s a difference in colour pattern on the head.

Members of the four populations mentioned, up to now referred to as J. transcriptus, do have markings on the cheeks and resemble those of J. marlieri. 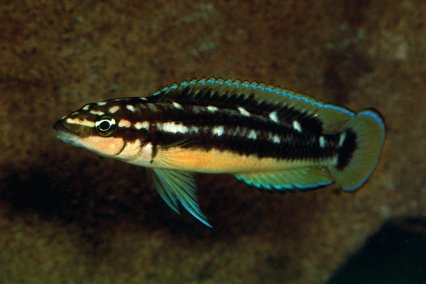 Other than the type locality, the only place known as inhabited by J. transcriptus is Kapampa in the Congo (pictured above). There it lives in the intermediate and rocky habitats and has a considerable range of depth. Individuals taking a dark coloration are found together with those that have a much lighter colour pattern.

Those at greater depths are usually much darker than those in the shallows, but this is not definitive as dark specimens were also found in shallow water.

A few kilometres either side of this location I have found forms with a colour pattern of three horizontal stripes and are therefore assigned to J. ornatus.

When young J. transcriptus are taken out of a fully decorated aquarium and placed in a light, bare tank, they will change to a very light colour within a few days and  then they can hardly be distinguished from young J. ornatus.

These fishes will even eat sponge!

Julidochromis species pick at anything that seems palatable, even at items ignored by most other fishes. Kohda and co-workers (1997) reported that more than 80% of the stomach contents of 18 J. marlieri consisted of freshwater sponge.

This is an invertebrate with a body structure of tissue laced with razor-sharp spikes. Crystals from minerals found in the water probably form these spikes or needles. They prevent almost any fish casually probing one for edibility from chewing on a bitten-off piece.

A few species in Cameroon’s  crater lakes and all Julidochromis, and probably Chalinochromis, species are the only cichlids known to eat sponges.

The thick and strong lips of Julidochromis may in fact pulverise the internal needles of the sponge before a piece is swallowed. The fish would probably first nibble on a section, crushing the spikes, before it bites off that piece.

Julidochromis  will also feed on other invertebrates, such as insect larvae and crustaceans, and on any algae they find.