Jaguar catfish in the aquarium Admire the beauty and grace of the Jaguar catfish when you can, says Dr Michael Hardman, for they need to be coaxed into community life.

Friends politely act interested when I show them what they see as my empty aquaria. “When are you going to get some fish?” they ask every visit.

They might think I keep imaginary fish, but my tanks are actually well stocked with catfishes. Most spend their daylight hours crammed into pipes and caves, but, as they settle, some come out during the day when I’m more likely to throw some minced earthworms or tablets their way.

My Jaguar cats recently started coming out – and I can openly view these glorious animals. However, I’m spending much more on tablet food because my kids try to guess how many it will take before they stop feeding. I always chicken out at 15, so we still don’t know how many is enough!

Liosomadoras oncinus describes a smooth-bodied Auchenipterid that looks like a Jaguar and is truly blessed in the beauty department. Unfortunately though, its looks are not matched by confidence and this South American is almost as afraid of sunlight as Count Dracula.

However, placing a snag of dead branches at the water surface and adding plenty of shelter and floating plants can encourage daytime adventuring.

If lucky enough to find them and rich enough to buy them, it helps to think of Liosomadoras as an occasional and exciting treat.

There are two kinds of Liosomadoras and L. morrowi and L. oncinus are described in detail later.

Their fear of open spaces means they crave lots of hiding places and will stuff themselves into any natural or artificial cavity in the aquarium. I use hollow logs, glazed pipes and long boxes made of old tiles held together with aquarium silicone.

Otherwise, both kinds have similar temperaments and care, not being particularly fussy about water chemistry.

However, given they are found in lowland streams of the Amazon and Orinoco, they feel most at home in pH 6.0-7.0, GH 0-4 and 23-27°C/73-81°F. Like all aquarium fish, they should be given excellent water quality, but they do not require lots of flow. 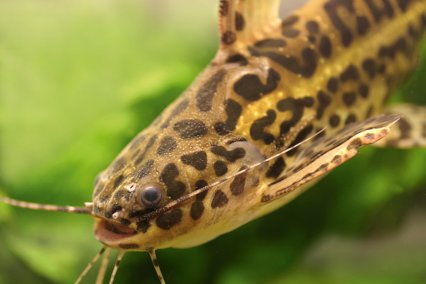 We don’t know much about Jaguar cats in the wild, but because they are members of the driftwood cat family (Auchenipteridae), we assume they take after their cousins in most respects.

Ichthyologists in South America have studied stomach contents of several driftwood cats that move into the flooded forest in the rainy season. Then Trachycorystes, Parauchenipterus tatia and Tocantinsia eat fruits, seeds, flowers and small invertebrates.

Although small fishes are not among their natural foods, cautious fishkeepers do not recommend keeping them together.

I don’t keep many under 2.5cm/1” with them but haven’t noticed any tendencies in my Jaguars. From stomach content data, it seems most driftwood cats eat invertebrates and sometimes fruits and seeds.

Jaguars have thick skull roofs and strong fin spines to discourage the hungriest of predators. If you must handle Jaguars, or any other driftwood cat, keep your fingers out of its ‘armpits’. The pectoral fin can clamp shut against the strong spine behind the gill opening surprisingly fast — and painfully.

When it comes to behaviour, Jaguars are typical of the family. They don’t seem at all interested in other species, unless it’s another catfish trying to move into their daytime retreat. If another fish tries to dislodge or otherwise muscle one out of its hideaway, these cats can emit grunts that can be heard from the next room.

These last around a second and sound like a deeper and richer version of a frog call. Jaguars, like most driftwood cats, have a thickened covering to their swimbladder that creates an effective drum. When the pectoral fin spine is rotated in its socket, vibrations are carried along the shoulder bones to the swimbladder where they are amplified and released as intimidating grunts.

Because they don’t really pay much attention to tank mates and are relatively robust, Jaguars are versatile additions to large aquaria stocked with Central and South American cichlids, characins, headstanders and the like. Yet because they prefer small foods such as bloodworms and tablets, if kept well fed they can also be included in an idyllic community of small and medium-sized fishes.

Just be sure to include lots of cavities of various sizes so that, as they grow, these catfish have somewhere to move on to.

However you decide to keep them, one set-up that definitely doesn’t work is having more than one male in the same tank. 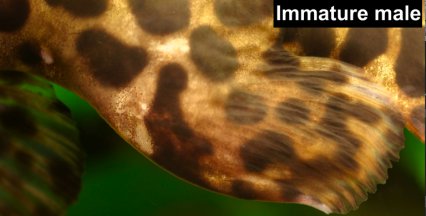 I have a good friend in Helsinki, Finland, who regularly imports directly from South America. Early last year he had 20-30 true Jaguars and I took home four, confidently pointing out the sexual differences and claiming that I had selected two lovely pairs. Two years later I had four males!

They quickly settled in and grew from 5-10cm/2-4” in a few months. Then it started happening. In spite of providing plenty of caves and hollows, the smallest appeared one morning looking like it had spent the night with an orbital sander. I removed it to a hospital aquarium, treated with a disinfectant and an anti-fungal agent and the fish recovered in a few weeks.

However, that wasn’t the end of the matter. A few weeks later, a similar incident took place and, because the tank only housed some Corydoras and the near-toothless Loricaria, I assumed the Jaguars were responsible for the damage, which was mostly confined to the back third of the body, and separated them all.

I have several large tanks and isolation allowed them to mature before trying to reintroduce them for a spawning attempt.  At least that was the plan...

It started with a kiss

Based on her plumbing, the female probably releases the sperm along with her eggs some time later and fertilisation is external. So the male is more of a sperm donor than a father.

This is how I managed to select four males —two mature and two immature — instead of two pairs!

Getting set to spawn in aquaria

Spawning Liosomadoras should be fairly straightforward. Other driftwoods such as Tatia, Tocantinsia, Auchenipterus and Parauchenipterus all spawn during the early rainy season and Liosomadoras probably do so too. Gradually increasing the temperature by 3-4°C/4-6°F over a few weeks, then replacing 50-75% of the water and adding a strong powerhead should trigger them if they’re ready.

If trying to spawn them, a single male should be kept with several females in an aquarium of at least 300 l/66 gal and with two to three times as many cavities as there are Jaguars. Keeping more than one male in the group will likely result in some trouble.

If they spawn, and you witness the embrace, females should lay and protect their eggs in a cavity perhaps several days to weeks later. Eggs should hatch a few days later at 24-27°C/75-81°F.

Parauchenipterus fry feed off their large yolk sacs for several days and graduate to small invertebrates such as brineshrimp nauplii, copepods and microworms. Liosomadoras would probably be the same.

Because driftwood cats rarely eat small fish, I expect adults and juveniles could be kept together in the spawning aquarium where, because of their nocturnal habits, you might first realise a spawning has taken place when you see a shoal of miniature Jaguars out feeding. 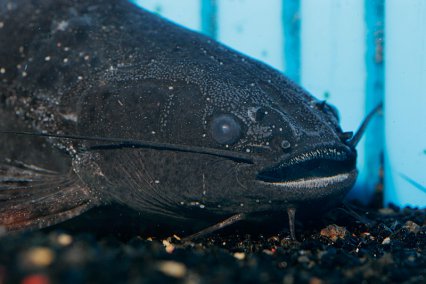 There are two kinds of these catfish and both are sold as Jaguars. It’s important to know which you’re buying because, through no fault of its own, the Black or False jaguar (Liosomadoras morrowi) pictured above is the ugly sister. Rather than the fabulous yellow, white and black patterning of L. oncinus, L. morrowi wears the classic catfish colours of brown with brown spots and tops out at 15-20cm/6-8”. True Jaguar cats reach 25-30cm/10-12” in aquaria.