In the land of the headhunters The Indian authorities allowed Heiko Bleher only a brief glimpse of Nagaland, but it was enough to find treasures in a place of secrecy and slaughter.

The border police at Nagaland were adamant. We hadn’t permission to enter this hilly north-eastern state in India. It’s off limits to all tourists — and explorers.

In my latest search for new fishes I had been given telephone confirmation by an ichthyologist at Guwahati University at Assam, and official documentation, our party was assured, would await us at the gate to Nagaland.

We had driven across the states of Assam, Meghalaya and Manipur and now had to wait days sitting at a police station for bureaucracy to take its painfully slow course.

Nagaland is so remote that only at the Ministry of Home Affairs at New Delhi or through the Indian Embassy High Commission can permits be obtained. It’s also a restricted area and I had been trying for years to get in there to explore it.

Until the mid 1950s there were no roads, schools, shops or administrative centres and literacy was practically nil. This was only designated a state of India on December 1, 1963, and it remains the smallest and most secretive.

We needed photocopies of our passports and passport photos, so made digital copies, transferred them to our laptop, burned a CD and had them printed, sending them to admin headquarters in the capital city of Kohima.

We slept in a guarded hotel and waited at Dimapur police station for a response. After two days we finally got the all clear.

Stopping at several Nagaland checkpoints and military controls we manoeuvred around several trucks which had turned over on this winding, mountainous road. We also drove past burning forests to finally reached the capital city of Kohima in early morning.

This settlement is almost 1,700m/5,580’ above sea level and, being head hunters, the Nagas chose to live where they could easily spot any enemies, so all the houses here and the rest of Nagaland are built on hilltops.

Police Chief Secretary Shri Zanbemo Lothaips granted us only a two and half day stay here, dictating that it was enough to where I wanted to go. It wasn’t worth the protest — and better than nothing.

I wanted to research the riverbeds flowing east into Myanmar, as I knew no one else had collected extensively there before, but the problem was finding the only road to get there.

Our driver got lost and went wrong. I made him return to Kohima and luckily found a man who told us to follow him as he rode his bike. He led us across ups and downs for at least one hour into a valley and the only track leading north, a meandering dirt road. From here on in, if we arrived at any bridge it had collapsed — not through being washed away as there was no water to cause it. 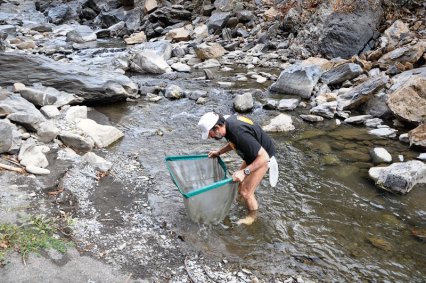 The Sidzi river was more a creek, very stony and quite fast running and I hoped to find interesting fishes there, until I saw a couple of large but dead cyprinids of the genus Tor. The Naga had poisoned the entire river to catch fish to eat just days before and killed practically everything in there in the process.

I find this problem almost all the tropical and sub-tropical world over, mainly in so-called third world countries. Populations are growing so quickly and people know which root or liana (woody vine) they can use to kill all the fishes — and do so when hungry. 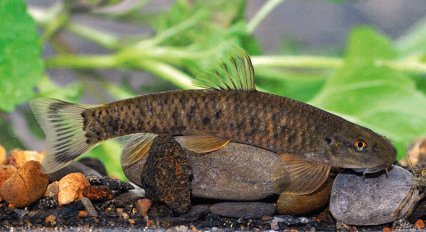 It was a perfect algae-eating fish, busily cleaning all the rocks.

Our driver was by now reluctant to tackle any more remote and steep, winding dirt roads, but continued after heeding our threats to leave him there!

Our destination was Meluri, again a settlement on top of a hill, and an innkeeper’s family there confirmed that all 26 villages of the former headhunters were sited nearby. The son explained that a festival of worship for a good harvest was imminent and the once-feared hunters joined in.

He also explained that he knew of a nearby river that could interest me and he could lead me there.

I was after the main river because it flows into the Chindwin valley and river in Myanmar, so I fIgured there must be a different aquatic fauna simply because all other rivers in Nagaland drain to the Brahmaputra valley. 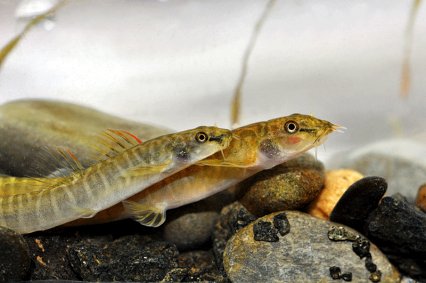 However, in this tributary I was only able to find one nice Nemacheilus loach species with striking colours and which has still not been identified. It looked to me though that this river had also been recently poisoned.

We walked along the river into the bed of the Tizii and then had to cross a woven hanging bridge, which looked particularly dangerous but proved otherwise. This type of bridge has been used for thousands of years and I can still find them in Central Asia, many parts of Central Africa and also South America — all made to a style the same the world over.

The Tizii river was cold at 17.5°C/63.6°F, pH 8.2 and conductivity 360 µS/cm, and so high because of limestone everywhere. My partner Natasha was holding the other end of the seine from the shore but I was in open water so deep I couldn’t stand on this stony habitat.

Nevertheless, I netted some Barilius species and juvenile Labeo with Lernea anchor worms attached to their head. 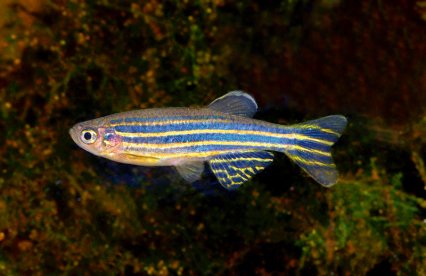 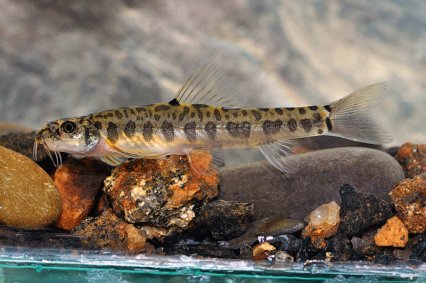 On the bottom there was a very interesting loach, silver with jet-black markings and certainly Schistura prashari. I don’t think this species had been collected alive before.

I thought there must be yet more fish in this cold, clear water and walked with my hand net downriver towards Myanmar to find rocks all over the place and plenty of algae.

Over the fast flowing rocky and shallow areas were many loaches, again different from the one collected in the tributary. My Nemacheilus species, numbered five, was also in the net. 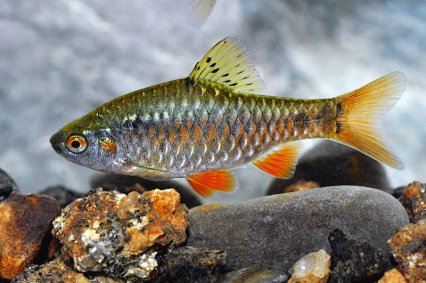 Then, finally came the second beauty of this Nagaland expedition. I found below overhanging bushes and along the river’s edge some beautiful Puntius, especially the males. The specimens were later sent to Sven O. Kullander in Sweden who, with his late wife, had worked extensively on fishes of Myanmar and he says he believes it to be P. meingangbii.

This fish was described by Arunkumar and Tombi Singh in 2003 from the Yu river drainage in the Manipuri state of India. My location was very much further south, but also a river with drainage to the Myanmar.

In any case the fish has already reproduced and should be another joyful addition to the hobby.

Despite the incredibly short time I was allowed to stay in this relatively unexplored region of India I was able to discover some true beauties. I will be back — permits permitting! 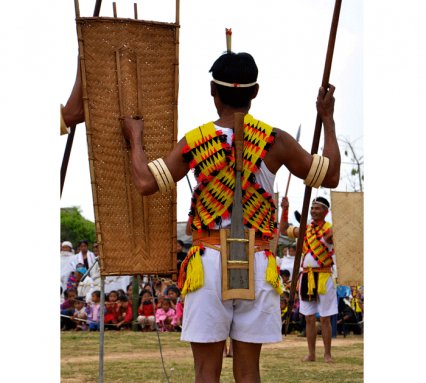 Nagaland lies in a narrow strip of mountainous territory between the Brahmaputra valley and Myanmar where, until the 1990s, head hunting of enemies was well practised.

The Nagas tribespeople needed human skulls, because they believed that only by possessing them could they guarantee the fertility of the fields and the people.

Their origins are said to be Indo-Mongoloid — though the womens’ features seemed more like those of the Quechua tribe I’ve seen from the South American Andes.