Easily distinguished from other glassfish, the Humphead has qualities but also attitude. Choose tankmates with care, warns Dr Neale Monks.

Described as recently as 2003, the Humphead glassfish has quickly become one of the more familiar members of the family Ambassidae. It is generally much like any other glassfish, but is always distinguished by that large nuchal hump!

Unlike the humps on cichlids, the shape on these glassfish is thin — resembling more of a fin than anything else. Both sexes have these humps, though those on mature males are larger.

Apart from these distinctive humps, Parambassis pulcinella conform, in most regards, to the usual glassfish shape. They are not as transparent as some other glassfish species, but have a rather beautiful golden sheen that immediately catches the eye. Basic coloration is otherwise silvery-white, except for smoky-grey markings on face and fins.

When Maurice Kottelat described these fish just six years ago, he based his work on specimens collected from the Ataran river basin in Myanmar, formerly Burma. It is assumed that Humphead glassfish occur in a number of other streams and rivers in this area, though this isn’t certain.

At least some specimens that turn up in the ornamental fish trade appear to come from the Salween river on the Myanmar-Thai border.

In all cases, these fish are found in clear, shallow, fast-flowing streams. They appear to occupy a similar niche to our native trout species, maintaining position in currents that flow around rocks and riffles, snapping up small animals that drift by. Little is known about their diet in the wild but, by analogy with other freshwater glassfish, it can be assumed that they are opportunistic predators feeding on such as shrimps, aquatic insect larvae and small fish. 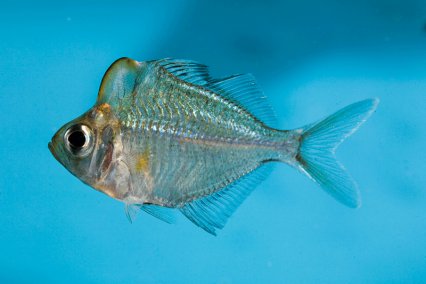 Maintenance
Despite their delicate appearance, glassfish are surprisingly adaptable, and the Humphead is no exception. The Salween, for example, is mostly a slightly soft and acidic body of water, much like other South-East Asian rivers, but Humphead glassfish also seem to do perfectly well in the hard, alkaline water of southern England.

Unlike some glassfish in the trade, these are strictly freshwater fish and shouldn’t be kept in a brackish water aquarium.

To ensure the water is well oxygenated, ensure the tank is not overstocked, and install a filter that keeps the water moving vigorously. Ideally the filter should provide a turnover rate around eight times the volume of the tank per hour. So for a 200 l/44 gal aquarium, the filter needs to be rated at 1,600 lph.

Water temperature doesn’t appear to be critical for these fish and they do perfectly well at the usual 25C/77F favoured by most fishkeepers. On the other hand, higher temperatures will reduce the amount of oxygen in the water, so that condition would be something to avoid wherever possible.

Fussy eaters
Like all glassfish, Humpheads are fussy feeders. At least during the initial stages, live and frozen foods will need to be used while settling these wild-caught fish into captive life. Earthworms and river shrimps are particularly favoured, though midge and mosquito larvae are also  readily enjoyed. Small fish will also consume Daphnia and brineshrimp.

Once settled in, they generally take frozen foods such as bloodworms without any complaint. At least some well-adjusted specimens take flake, but at the very least this food should be supplemented with additions such as chopped squid and prawn.

All glassfish are opportunistic predators and the Humphead has a deceptively large mouth. Smaller fish such as guppies, danios and Neons will quite likely be viewed as tasty food! That same sad fate may befall small shrimps such as Cherry and Amano.

Social behaviour
Humphead glassfish may be schooling fish in the wild, but under aquarium conditions  they tend to be aggressive towards one another.

This behaviour can be prevalent among smaller glassfish species too and most likely reflects bullying between males as they jockey for dominance within the group.

Whatever the explanation, Humpheads should be kept either in groups of at least eight specimens or smaller groups with just a single male.

Sexing these glassfish isn’t too difficult either, since the males have those larger humps. Males also tend to be a bit bigger, but that isn’t apparent until all the fish are fully grown.

Curiously, maximum size of this fish under aquarium conditions appears to be a bit larger than the maximum size reported in scientific literature — 10cm/4” as opposed to 8cm/3.1”.

Breeding
Nothing is known about the breeding behaviour of this species. The other Parambassis species are egg scatterers that exhibit no brood care and the Humphead probably breeds in the same way.

Tank mates
These fish work quite well in community tanks, with a few reservations. As already mentioned, they are predatory fish, eating any fish or shrimp they can swallow whole, so tank mates should be sufficiently large to minimise the risk. They are also a bit thuggish — yet another trait they share with other glassfish!

While this doesn’t mean they are nippy or territorial, it does mean they throw their weight around at feeding time. Tank mates should be sufficiently robust to prevent this being an issue. Barbs and characins would be fine, but mixing Humpheads with Discus or African butterflyfish would be a bad idea.Otherwise they would make excellent companions for the likes of Clown loaches, loricariid catfish, spiny eels, Silver dollars and other robust community fish.

Although looking bizarre, Humphead glassfish are beautiful and, while pricey, surprisingly hardy and adaptable fish with much to recommend them.

PFK featured these fish in Interesting Imports, shortly after they first became available in the hobby.

This item first appeared in the June 2009 issue of Practical Fishkeeping magazine. It may not be reproduced without written permission.