How to spot ill health in your fish 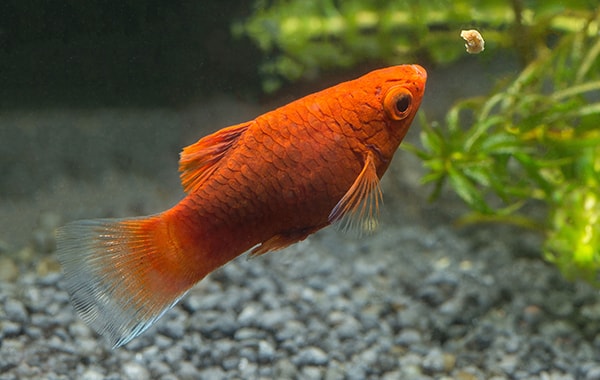 In order to recognise a poorly fish, we must first know what a fish looks like and how it behaves when healthy as we can only recognise the ‘abnormal’ when we know what is normal.

For example, a goldfish keeper may become concerned about the presence of small white spots on the gill covers and pectoral fins of their fish. Further investigation will lead them to discover that these small white spots are not a sign of disease but are actually special spawning pimples that cover certain parts of male goldfish when they are preparing to reproduce.

A tropical fishkeeper could become concerned that their Synodontis catfish are swimming upside down as this could be a sign of a swim bladder disorder. Again, further investigation will lead the fishkeeper to discover that the fish are actually ‘upside-down catfish’, which swim happily in an inverted position when juvenile, often resorting to a more conventional posture as adult fish.

Learning more about your fish

Although as a fishkeeper you’re always learning something new, it’s important to know as much about your chosen species pre-purchase as this will help to ensure you care for them in the best way. When you read up on the potential size, feeding and water quality requirements of any potential new fish, try to also seek information about the natural appearance of the fish at different stages of their life cycle and their natural ‘normal’ behaviour. For example, Kribensis cichlids (Pelvicachromis pulcher) show a markedly red belly at spawning time but this could be mistaken for bacterial erythrema, while clown loaches (Chromobotia macracanthus), are notorious for their eccentric behaviours.

Once you’ve bought your fish you should familiarise yourself with their individual and natural appearance and behaviour. In the first few days in the tank, your new fish are likely to be very timid and may decline feeding, however as they settle most common freshwater aquarium inhabitants will venture out into the tank and respond to feeding.

Also try to take note of the swimming patterns of your fish, how quickly they eat food and the method of food intake. YouTube has a wealth of videos of healthy aquarium and pond fish and can provide a great opportunity to view what is normal in terms of appearance and behaviour when it comes to your species. Feeding time too is an excellent opportunity for a brief visual health check of your fish.

Behavioural and morphological deviations in fish

Abnormal signs to look out for in your fish can be split into behavioural and morphological deviations from the accepted ‘normal’ state.

There are many behavioural indicators which can mean your fish are suffering from poor health.

Gasping for air at the water surface is a common sign of gill disease or water quality problems in most fish. However, in air breathing fish such as the Lungfish this is perfectly normal behaviour.

If a normally active fish stops swimming, becomes lethargic and or only swims when they are disturbed, then this is another strong indicator that they are unwell. Although, for sedentary carnivorous fish this is again a common ‘normal’ behaviour. As well as movement, changes in feeding and fish refusing to eat is usually a sign that they are unwell.

Fish infected by skin parasites or irritated by certain water pollutants will flick and scratch against objects in the aquarium or pond. Erratic darting motions instead of smooth swimming is often seen in small tropical aquarium fish when they are infected by internal parasites or bacteria. These affect the swim bladder and occasionally the neuromuscular systems, which have an effect on their posture and locomotory activity. Assuming an abnormal posture, such as a lopsided gait or even fully upside-down, is usually a sign of a swimbladder problem, a common complaint in fancy aquarium goldfish. The same problems can also cause the fish to lose its normal neutral buoyancy, and they either sink or rise when at rest.

In order to successfully understand the difference between normal and abnormal behaviour it’s crucial we learn what we can about our fish and their movements when they are healthy. It’s also advised to keep check of the aquarium’s water quality to spot any changes that may affect the wellbeing of your Fish. To help, Tetra’s Test 6in1 strips enable you to quickly and reliably determine the six most important water values in aquariums in one simple step. The pH, general and carbonate hardness (GH + KH), nitrite (NO2-), nitrate (NO3-) and chlorine (Cl2) in the aquarium water are measured and the Tetra Aquatics app can be used to determine the water values quickly and reliably using your smartphone.

The same is true for the external appearance of the fish and so it’s important to familiarise yourself with its colours, body contours and finnage.

If a fish’s skin is irritated either by a pollutant in the water such as ammonia, or by an infection from a parasite, the first response the fish will show (in addition to the flicking and scratching mentioned above) is an overproduction of mucous. The mucous layer is highly protective. A fish increases its production when the skin is irritated causing its colours to look duller and sometimes have a grey hazy appearance.

Most external parasite infections cause generalised symptoms however, one known as white spot causes a very recognisable condition. As the name suggests, infection of the skin with the white spot parasite causes the fish to develop tiny white pimples over its body. The white spots are around 1mm in diameter and tend to develop on the fins first before progressing onto the body as the infection spreads. Scale-less fishes such as Clown Loach are highly susceptible.

Another very recognisable condition is finrot, although there are many possible causes. On a healthy fish the fins should be complete, symmetrical and of a uniform consistency. During finrot the skin between the bony fin rays rots away leaving the fish with decaying tissue where the fins used to be. The delicate tissue of the mouth is also prone to a similar necrosis.

If the cause of the finrot is identified and treated, the fins rapidly grow back. Most commonly the disease is due to extremes of pH or ammonia poisoning, but certain types of bacteria can also cause the problem.

What’s more, a bacterial infection can lead to large open sores on the skin of the fish called ulcers, which are very damaging and must be treated early, as well as damage to the delicate tissue behind the eye leading to swelling which pushes the eye outwards – a condition known as exophthalmia or pop-eye. Often in these circumstances the fluid in the eye will also turn cloudy.

Many internal problems can also manifest themselves externally. For example, damage to the muscle around the spine, or vertebral deformity can lead to spinal bending. There are many causes of spinal damage such as parasitic or bacterial infection, vitamin C deficiency and muscle trauma during development, which can leave the fish’s spine with a pronounced curvature and affect swimming.

Recognition of disease in fish involves knowing what your fish look like, how they swim, feed, interact and behave. It is only when we truly know our fish can we begin to recognise the early signs of an ill health problem.

Caring for your fish

As in all fish health problems, the first thing to check is that the water quality is within the preferred limits of the fish. If this is within the correct limits and there appears to be no other signs of why your fish are experiencing poor health it’s always best to speak to your local aquatics retailer who’ll be happy to help you rectify the situation.