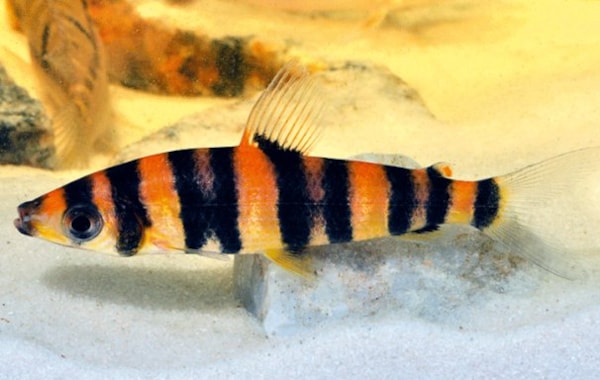 Heiko Bleher reveals details of some rather interesting South American fish he's found on his travels...

Habitat: Black water, as the Rio Negro, and full of rocks, stone-plates below the surface and fine white sand. It had no aquatic vegetation, only bushes hanging over.

Notes: Leporinus has 94 described species and another 30-50 undescribed, and probably the widest distribution of all South American characoids. I found species in almost every body of water east of the Andes from Venezuela south to northern Argentina.

L. fasciatus (Bloch 1794) has nine straight black bands, almost of equal width, according to the holotype. The bands on this bright orange base coloured specimen are completely different, similar to L. bleheri, Géry, 1999, which I discovered several years ago in the Rio Verde, Bolivia, and also in some rocky habitats.

Aquarium: Get an aquarium of at least 100-120 l/22-26 gal. It should have fine sand, rocks and well washed driftwood. If you want plants, only choose tough ones, as soft leaved plants may be nibbled.

As for companions go for angelfishes (only P. altum lives in its habitat), Heros, Geophagus and Uaru species, as well as tetras such as Bryconops, Iguanodectes, Poptella and Moenkhausia species. 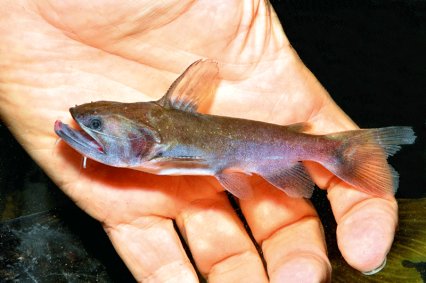 Habitat: Overhanging trees made this slow stream shady. The water was tea coloured and had no aquatic vegetation.

Notes: In 1858 Kner described this unique auchenipterid catfish from Marabitanos at the upper Rio Negro river in Brazil and it has also been found in the Orinoco basin, but this is the first recorded from Colombia and the Rio Inirida basin. This is a monotypic genus and contains one species.

Aquarium: This species should have an aquarium of at least 150 l/33 gal. It can take prey almost its own size so have mates larger than itself. I’ve had specimens of 30cm/12” TL so be aware!

Large cichlids, such as Cichla, large Crenicichla, Astronotus, or very large Hypostomus, Pseudacanthicus or Pterygoplichthys can be recommended as companions. 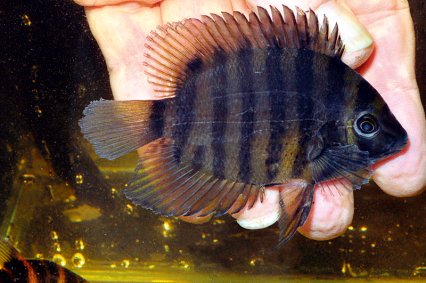 Habitat: Full of leaves and fallen-in trees, driftwood over the bottom, sandy areas and biotope covered with overhanging trees. The water was tea coloured and had no aquatic vegetation.

Notes: Heros consists of four valid species, but there are probably more and definitely a large variety of colour morphs.

H. efasciatus was described by Heckel (1840) from the Rio Negro, H. notatus known only from a painting by Jardine (1843), H. severus from Maribitanos (upper Río Negro) and Venezuela and H. spurius from the Rio Guaporé, Mato Grosso, Brazil.

This collected specimen from the Caño Bocón, which belongs to the Amazon basin, is probably female and different in morphology from these four.

Aquarium: This should be at least 100 l/22 gal for groups of at least three of these cichlids. The aquarium must have areas of low light and slowish water flow. For tank mates I would suggest dwarf Crenicichla, Mesonauta, Geophagus and/or Satanoperca, Leporinus and/or Anostomus species. 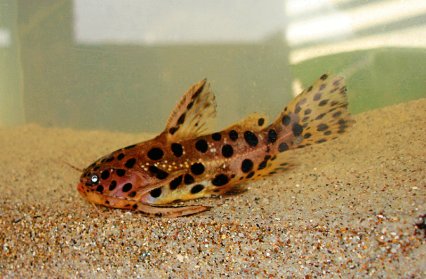 Habitat: Dead arm of the Rio Jutaí, full of leaves and fallen-in trees, driftwood over a sandy bottom and biotope with overhanging trees. The slow water was light tea coloured with no aquatic vegetation.

Notes: Liosomadoras consists of two species: L. oncinus (Jardine, 1841) from the Negro and Branco river basins in Brazil and the Orinoco River basin in Venezuela, and L. morrowi, Fowler 1940, known only from the Ucayali River basin in Peru. The former looks similar, but I believe this is an undescribed species.

Aquarium: This catfish should have sandy, low light areas and well soaked driftwood. These are night fishes and that’s when they can be truly appreciated. An aquarium of at least 60 l/13 gal is best – it should not have a strong flow.