Heiko Bleher found these beautiful gobies for tropical aquaria when researching in the Etna Bay area in West Papua, Indonesia.

A clear water creek measuring 3-5m/10-16’ wide and at the deepest point 1m/3.3’. The ground consisted of gravel, pebbles and sand as well as leaves and driftwood. The surrounding area consists almost entirely of primary rainforest and overhanging Pandanus plants, but there was no aquatic vegetation.

Ophiocara porocephala has a large distribution — from South Africa to Japan to Western Australia. This is a colourful variant and semi-adult, which can grow to 25cm/10" TL. The small goby looks a bit like Oxyeleotris nullipora, which is from the middle of the Fly River, and east of this location. It doesn’t have such bright orange ventral colour, and the blotches along its body are much larger. 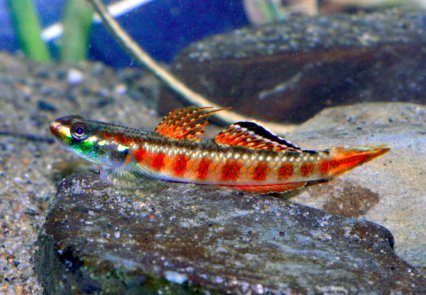 The Stiphodon genus has a large Indo-Pacific distribution, and more than 30 species are recognised. S. rutilaureus is only known from the north-eastern side of this island in Letak creek about 25 km/15.5miles south-east of Wewak, New Guinea. I discovered this beauty in the Indonesian side and only in the south-west of the island.

Hardly more than 4-5cm/1.6-2”, these can be kept in aquariums as small as 60cm/2’ long. They are peaceful and good fish for a community, slow water flow aquarium, biotope correct, with sand, gravel, rocks and well watered driftwood.

For mates I’d suggest rainbowfishes and blue eyes  — Melanotaenia and Pseudomugil. They also live with halfbeaks, Zenarchopterus and other gobies and gudgeons. 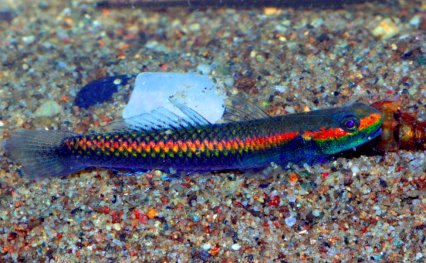 S. allen is only known from Harvey Creek at Deeral, north-eastern Queensland, Australia, and it has an orange-violet bright stripe. My find has a bright orange-red stripe with some green below.  There’s a second similar species called S. semoni originally from the Ambon Island, Molucca Islands, Indonesia, but this has a bright blue stripe and is often called the 'Neon-blue goby'. I believe this is either S. allen or a new species.

As for Stiphodon cf. rutilaureus. Again, their natural habitat is very shady and little sunlight penetrates. 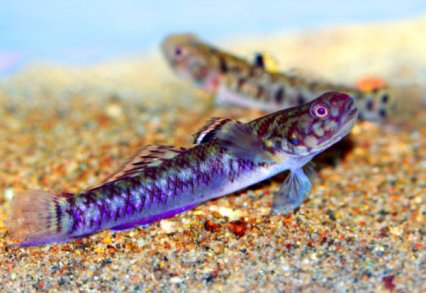 The lake habitat was full of moss, algae and black water with fallen-in Pandanus plants and large trees surrounded by primary forest.

In the Mugilogobius genus there are 35 valid species, and they have a Indo-Pacific distribution in fresh and brackish water. The cavifrons species is known from Sula Takomi, Ternate, in the Moluccas Islands, but it also has a large distribution north to southern Japan.

I found this similar species in a small freshwater lake, which, I believe, has never been collected from before in the centre of this uninhabited island seemingly in the middle of nowhere. The fish was only 22mm/0.9” TL.

These gobies are peaceful if kept with smaller fishes or even in a nano aquarium with others their own size. The biotope should have rocks covered with algae, sand and gravel, in addition to well-watered driftwood. The aquarium should have no flow and I’d suggest only tiny fish as tank mates.