Heiko Bleher finds more interesting cichlids on his latest Amazon field trip in the unexplored region of the Rio PuritÃ©.

Habitat: This brightly coloured Satanoperca was in the lake and river, but always over mostly light beige and fine sand. Fallen trees were everywhere and the only aquatic vegetation was Cyperus species along the edges and floating plants — as with the other three cichlid species featured here.

Notes: Eight species are described in this genus. Normally they are found in river systems east of the Andes down to Argentina, but I cannot place this one which has extreme beautiful golden-orange lips. It certainly belongs to the Satanoperca jurupari group.

Aquarium: This species needs no less than 200 l/44 gal. As for mates I suggest Mesonauta, Hypselecara and Biotodoma species, and larger tetras like Leporinus, Chalceus and/or Triportheus species.  Corydoras and Otocinclus species can also be added if in smaller sized groups. Décor must consist of fine beige or white sand. Some leaves, driftwood and, if wanted, round stones are ideal too. Go for strong Echinodorus, Cyperus and Sagittaria plant species. The aquarium should also have a slow flow. 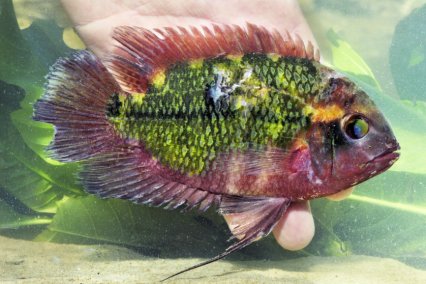 Habitat: I found this in deeper water that was full of driftwood and fallen-in trees. Piranhas were about, as were a few floating plants. Sand was everywhere.

Notes: I was astonished by the beautiful reddish colour of this variant, although some predator had taken chunks out of its side and parts of its fins, which is normal behaviour towards the dry season. This particular variant is probably only found in the Purité system.

Aquarium: This species should have same minimum size aquarium as Satanoperca species or Geophagus. It needs some flow and as for mates, décor and plants I suggest the same as for Satanoperca as I found it in the same habitat, but would place floating plants to offer some shade. 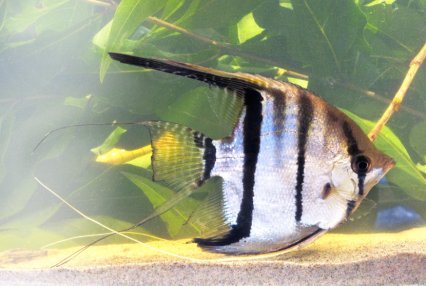 Habitat: Fallen large trees along the edge of the lake and overhanging jungle trees brought shade most of the day. The lake was of black water and had little aquatic vegetation, besides floating plants (Pistia, Salvinia and Eichhornia species).

Notes: I had recently written about all angelfishes belonging to the Pterophyllum genus, which I found in the Amazon and Orinoco basins as well as in the Guyana shield. I have recognised P. eimekei as a good species from the lower Amazon. There are four described and six undescribed species. I have given this variant from the Rio Purité the number sp. 6, as it’s the same as I found in the Lago Aipuá and gave the same number to.

Aquarium: All tank needs are the same as for Mesonauta, as they live together. The exception might be for the pencilfish, for if one places the latter and they are very small, and the angelfishes adult, they might be in danger of being swallowed! 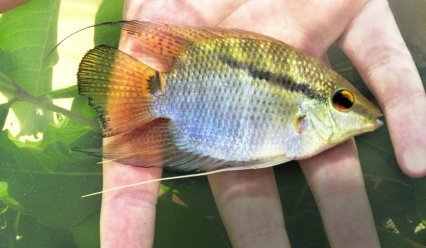 Habitat: These were found in black water with many floating plants, mainly Eichhornia crassipes and Pistia stratoites. The bottom was covered with leaves, driftwood and fallen-in trees. The fish stayed only in still water habitats along the edge of this lake or in bays along the river bed.

Notes: There are now six species of Mesonatua described and at least three undescribed: the M. sp, 'Amazonas', sp. 'Orinoco' and sp. 'Xingu'. Maybe this one should be named. sp. 'Purité' as I believe no one had collected there before. This river basin belongs to the Amazon basin and not Guyana, from where guyanae is described.

Aquarium: These medium-sized cichlids need an aquarium of at least 120 l/26 gal. Décor should consist of sandy bottom and leaves, large floating plants (Eichhornia crassipes) and driftwood. Other South American plants like Echinodorus species, Cabomba, Hydrilla, Cyperus and Utricularia are optional. Your tank should have a slowly flowing filter, as these fish are used to still water. Have angelfish (P. eimekei group), Apistogramma species, pencilfish like Nannostomus trifasciatus and N. eques, also Ancistrus, Hypancistrus or Peckoltia species as tankmates. If wanting Corydoras go for C. arcuatus.