Have you kept these five underrated barbs? 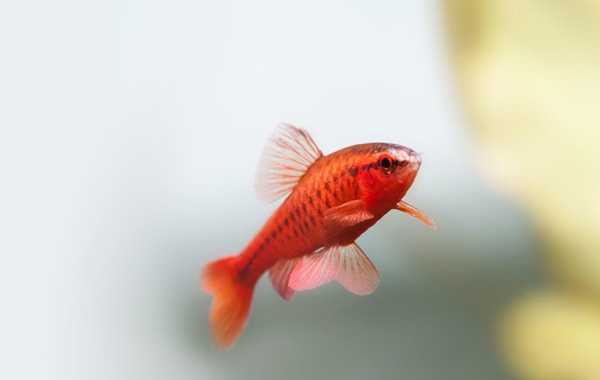 In general, barbs are undemanding and active aquarium fish, but with so many suitable for aquaria you can’t keep them all – which ones have you kept?

There are 28 genera and over 500 species of ‘barb’, right up to the 3-meter-long, 660lb, Catlocarpio siamensis, known as the Siamese carp or Giant barb – the largest cyprinid (carp-like fish) in the world. Many are unavailable, like Caecobarbus geertsi, the endangered African blind barb from the Democratic Republic of the Congo. 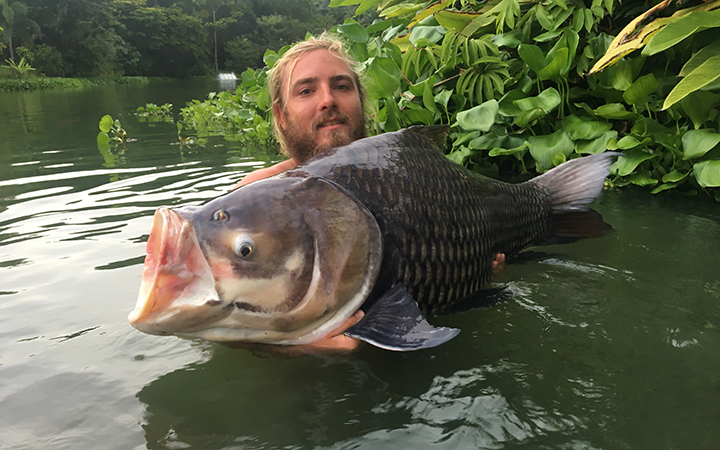 However, there’s a large number of barbs that we can put in our tanks and personally, I think some of the most common species are hugely underrated fish. 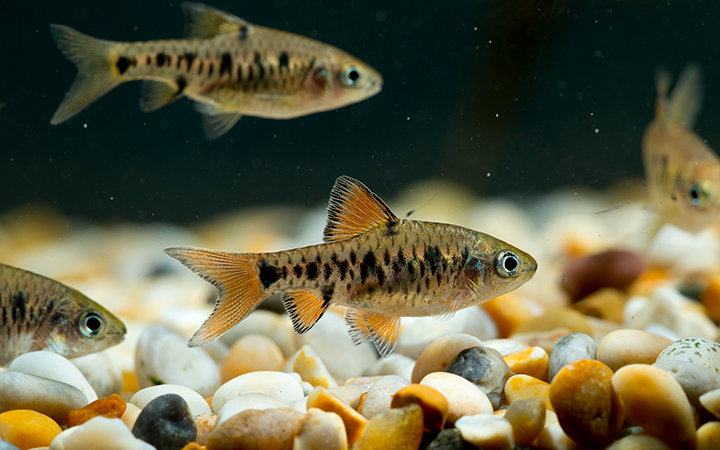 They appreciate slightly cooler water (like many barbs) making them an excellent candidate for a smallish, tropical or unheated, aquarium – how many people start the hobby. 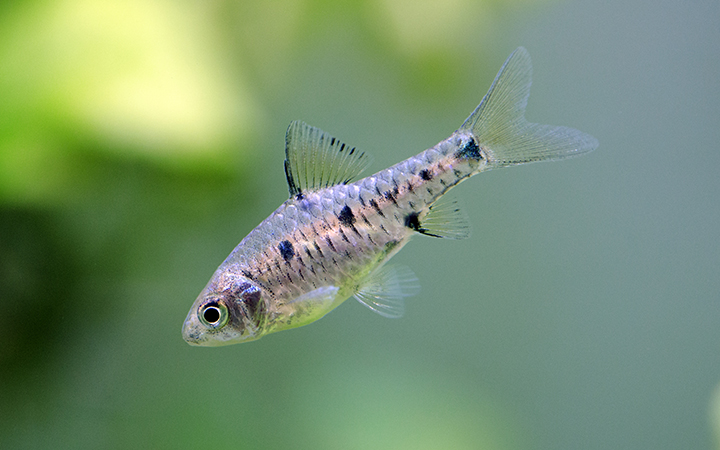 Origin: Indonesia: thought to be endemic to northern Sumatra but their full distribution is uncertain.

Availability and cost: very common, from £1.75+

The Cherry barb, Puntius titteya, has similar attributes. They’re peaceful, small, hardy, inexpensive and happy in a tropical or unheated, indoor tank. Rather than underrated, the Cherry barb is kept and loved by many – I guess the colour makes a big difference. The fawn and red of the female is attractive, but the vivid red of mature males is stunning. 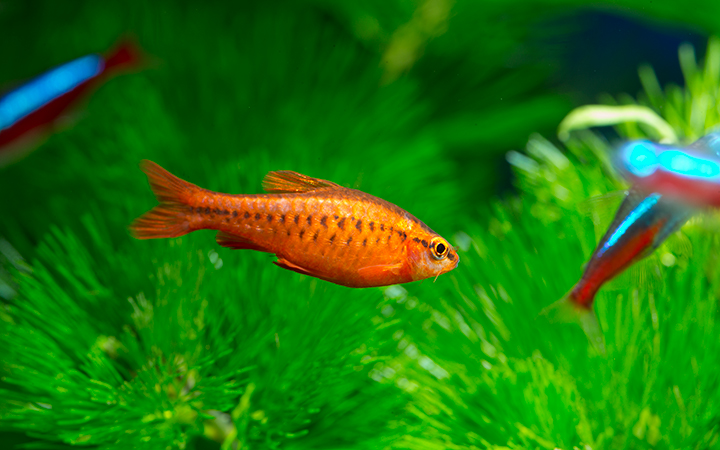 Different strains are available in the hobby. ‘Super-red’ females may look more like young males with red in their body. A ‘super red’ male shows off a deep, blood-red colour – uniform over body and fins.

In nature, they are endemic to small streams, deep within Sri Lankan rainforests. Substrates are of sand or gravel, often covered by leaf-litter. Due to agricultural habitat destruction, the dense ‘wet-zone’ forest of southwestern Sri Lanka is now majorly fragmented – leaving very few suitable streams. 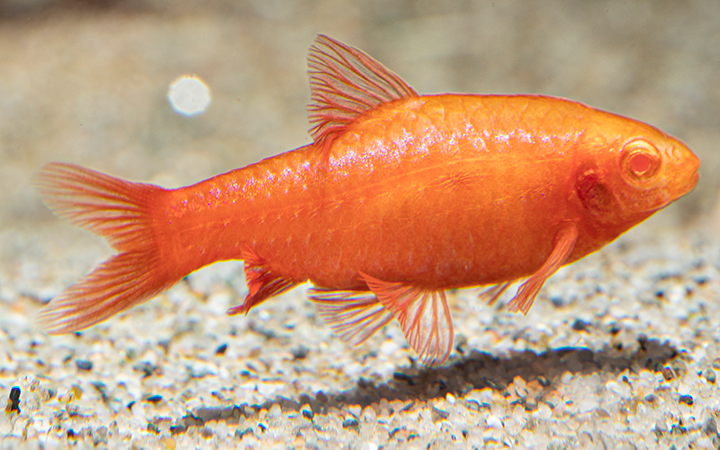 Availability and cost: very common, from £1.50

A personal favourite is the Black ruby barb, Pethia nigrofasciata. I once set up a cool-water, planted display tank with a mixture of barbs. Some took centre stage straight away with bright colours; the Ruby barbs became better week-on-week until they were my favourites of the collection. 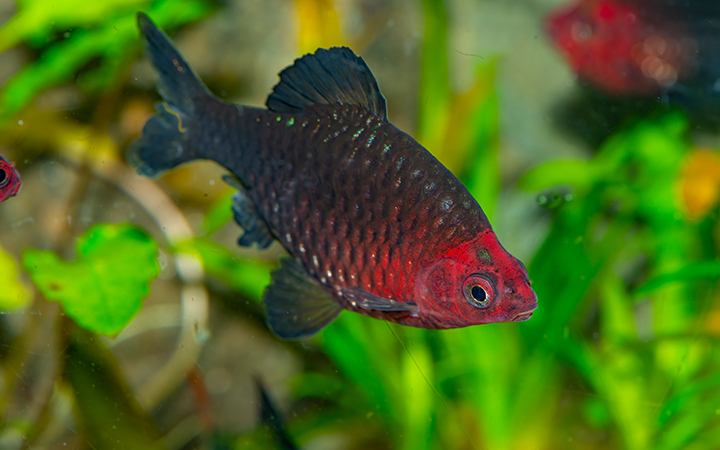 Again, numbers in the wild are pressured due to a mixture of habitat destruction and over-fishing for the ornamental market. They have been on the edge of extinction in the past; fortunately, populations are bouncing back since the Sri Lankan government banned their export, and conservation efforts have reaped their rewards.

Naturally, their diet and distribution are akin with the Cherry barb and commercially bred fish pose no difficulty to home and feed.

A larger, deeper body, robust nature and activity levels see a wider range of suitable tank mates compared to the above, smaller species. Larger rainbowfish and gouramis mix well as do less aggressive, small to medium-sized cichlids such as Gymnogeophagus, Crytoheros and Mesonauta spp. 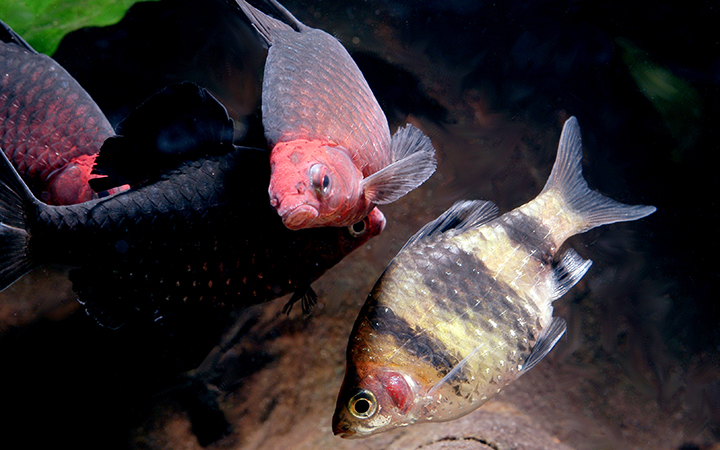 Availability and cost: common, from £3.00

The Drape fin barbs, Oreichthys crenuchoides, aren’t hugely common nor are they particularly hard to find. This is another species that will repay you for your patients - when young they look like weak fish with ghostly colouration – it’s an unfair representation. 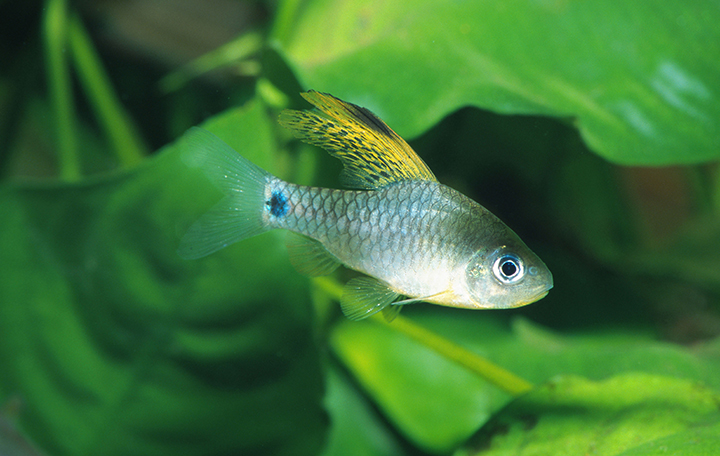 In mature fish, the body displays little in the way of colour. A silvery body is covered in a reticulated pattern, and a blush of yellow highlights the chin of males and females. The male also has a larger, delicate yellow patch behind the gill. While the dorsal fin of both sexes displays deeper yellow, it’s the male that steals the show. His large, extended dorsal fin is where the common name comes from, draped when not in play but, when displaying to a female, the erect fin makes for a stunning courtship show.

Unlike most barbs, this is a relatively inactive species with a shy nature. Tankmates should be small and gentle such as Ember tetras, Hyphessobrycon amandae, Sparkling gouramis, Trichopsis pumila, or the Lambchop rasbora, Trigonostigma espei. Though shy toward other fish, male Drape fins are rather competitive toward one another, for this reason, a shoal should have a female bias.

Otherwise, the drape fin barb is an undemanding aquarium fish which is adaptable to water conditions, if extremes are avoided, and is easy to feed. They’re also more at home in brightly-lit aquaria than many barbs – their natural habitat is relatively clear and slow-flowing streams and rivers running through open grassland. 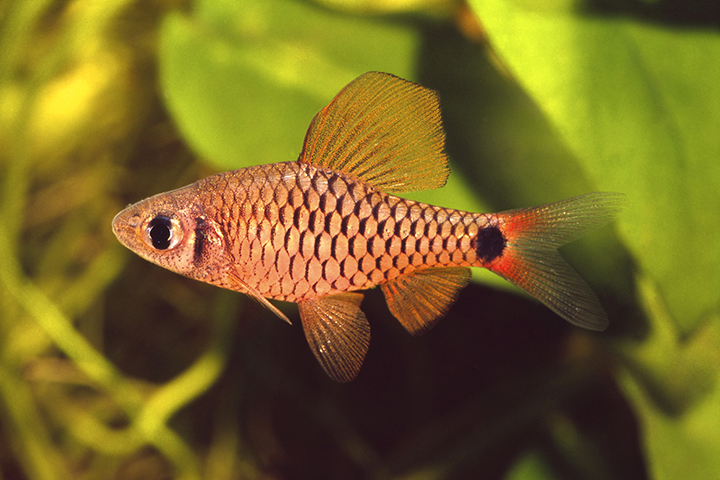 Habitat: Slow-moving streams and rivers with a muddy substrate

Availability and cost: you may have to search for them, around £4.50

Finally, the Filament barb, Dawkinsia filamentosa. It’s a fish that, like myself, you’ve probably passed by on numerous occasions in a shop setting, but the wow factor of a group of mature specimens is an eye-opener. 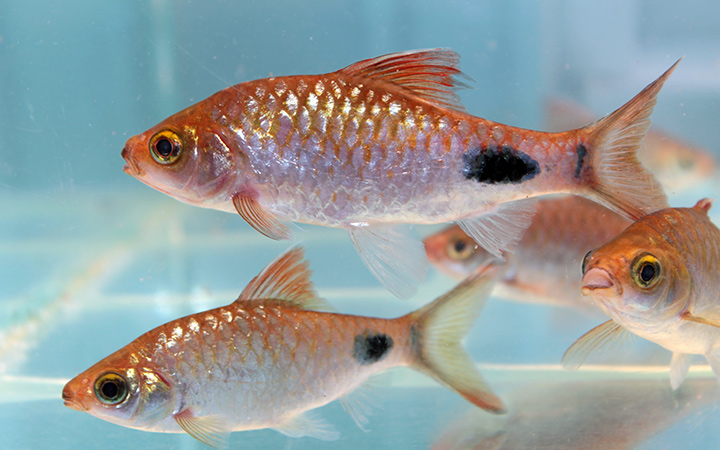 Robust, they certainly are. Their lean, muscular bodies and strong, forked tailfin allow them to swim tirelessly in larger, lowland rivers. That makes them a barb for larger aquaria, with a good amount of open swimming space. Sometimes found in brackish waters, these are adaptable fish – as long as conditions don’t get too hard. Good water quality is required as they don’t fare well with a build-up of organic pollutants. Strong aeration should also be supplied, but a powerful flow is not a necessity. 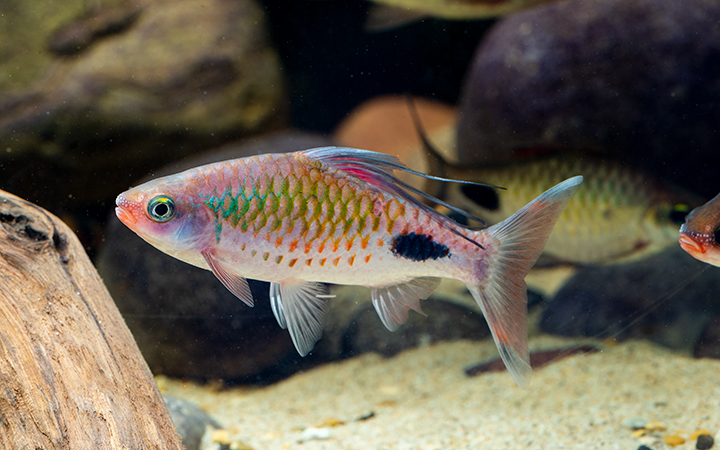 Availability and cost: not rare but you may have to search for them a little, around £15.