Water: Neutral or slightly acidic, but will adapt to harder, more alkaline conditions.

Aquarium: Huge quarters and a greatly oversized filtration system. An adult needs a tank of 180 x 60 x 60cm/6' x 2' x 2' as an absolute minimum but something in the region of 3m x 1m x 1m/10' x 39" x 39" would be our recommendation. Adults are usually fairly placid; juveniles can be a little feisty. I had a 45cm/18" specimen which lived happily alongside some large barbs and catfishes. 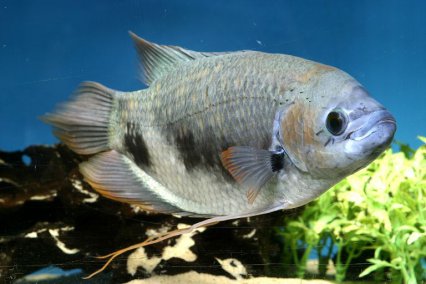 Adult colour: This fish is still a youngster. When mature, it will turn an attractive steely-blue grey (and sometimes black), and develop stunning red, filamentous extensions to the caudal fin, and red margins to the other fins.

Breeding: Not known to have been bred in captivity. Probably spawns in a similar manner to its cousin O. goramy, which is a bubblenester.

Availability: Small ones have started turning up. This fish was on sale at Wharf Aquatics in Nottinghamshire.

This article was first published in the October 2004 issue of Practical Fishkeeping magazine.