Freshwater shrimps have never been more popular. Ade Dunn explains how to keep and breed those of the Neocaridina genus.

Some of the best for beginners belong to this genus, such as the Cherry. Most are hardy and comparatively easy to keep.

Where do they come from?

Wild Neocaridina shrimp mostly originate from South-East Asia, living in streams and ponds, usually with plenty of plants and often with wood and rocks as natural substrate. Many species in the hobby, however, have been captive bred and, in some cases, the original wild species is debated.

How are they best kept in the aquarium?

Neocaridina are usually best kept in well-planted aquariums, with plenty of hiding places and mosses. I find they also do well when kept with bogwood, and stones. Plants and décor provide hiding places and a surface for bacteria and other tiny organisms, including algae, to live on. These are pretty much an essential part of shrimp diet.

I prefer to keep them in groups of at least six, as in smaller numbers they can become shy. A large group also increases the gene pool. 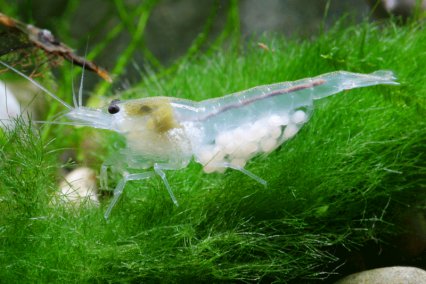 Is there a minimum tank size?

Neocaridina shrimp have very small bodies and usually add little to the bioload of an aquarium, especially when kept with other tank mates and not target fed. However, when kept in species tanks they have more impact as they need to be target fed rather than take leftovers.

However, they can still be kept in very small tanks if well planted and with adequate filtration, so are popular in nano and pico aquariums as small as 15 l/3.3 gal. Anything less is not really suitable, as six neocaridina can quickly become 100 in a short time!

This said, the bigger the better. Use the largest aquarium you can fit in and afford.  A larger volume of water will give you a larger ‘safe’ zone, especially where temperature and water quality are concerned. One often fatal factor is sudden temperature increases, or changes in water quality, and smaller bodies of water are far more prone to sudden changes.

Any dwarf shrimp needs high water quality. Even a tiny trace of ammonia is fatal and these creatures are also intolerant of nitrite. As such they should only be stocked in well established aquariums with fully ‘cycled’ filtration.

Too much copper is also fatal. You cannot use medications containing traces and new plants should always be soaked and rinsed thoroughly to remove any traces of copper-based anti-snail treatments.

In fact, some shrimp food manufacturers add trace amounts of copper as shrimp need these to produce the oxygen-carrying component of their blood in a similar way to how we need some iron for ours. In excess, however, this is harmful to humans.

Most species of Neocaridina do best in medium to hard water, with a pH of 6.5-8.0.  Where water is soft, however, calcium supplements may be needed to help the shrimp during moulting when calcium is needed to help make new 'skins'.

At higher temperatures growth and breeding might be faster, but their life spans are considerably shorter due to the increase in their metabolic rate cause by those temperatures. In warmer water you may also need to add additional agitation/aeration to compensate for the lower amounts of dissolved oxygen.

What fish can they be kept with?

I tend to keep my dwarf shrimp with just snails and other dwarf shrimp. This way you will see more of your shrimp and more of their natural behaviour, such as swimming to the surface and hanging from floating plants.

However, if you want to keep fish choose those too small to make a meal of your shrimp, including the young if you want to breed them. Choose also primarily plant/algae eaters, but remember that few fish are 100% vegetarian and most will take a meaty morsel if presented.

Those fish also need mouths too small to easily bite a shrimp — which must also have plenty of hiding places available in which to retreat when moulting. At that time their soft bodies make them an easy target, even for smaller fish.

Among the safest bets to keep with dwarf shrimp are probably small varieties of Otocinclus catfish which are usually considered 100% shrimp safe, even with newborns. Other species that may be safe are smaller Corydoras species and small loricariid catfish such as plecs which stay quite small.

I have also kept shrimp with dwarf gouramis, smaller tetra species, smaller Rasbora species, Cherry barbs and Kuhli loaches, but this was in a densely planted aquarium where shrimp can hide easily but be rarely seen. 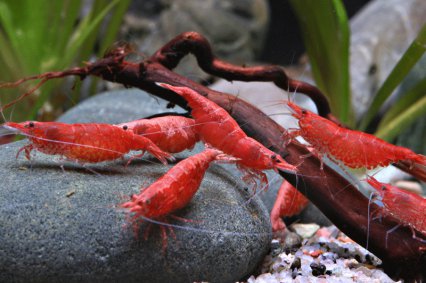 Won’t they be sucked into my filter?

This is a common problem with internal or external power filters, especially for babies. However, it can easily be solved. Either push fine pored foam over the inlet — useful for intakes of canister filters or hang-on types that have intake tubes — or cut out the foot of a fine low-denier stocking and fasten it over the intake of your filter with an elastic band.

If the suction from your filter is still strong enough to suck on shrimp and keep them there, either turn the flow down, if there’s some control, pack your filter with more wool to reduce flow — or, in the case of internal power filters, put a thick layer of filter floss between the body of the filter and the stocking foot fastened over it.

If you have an external canister filter, don’t panic if shrimp get sucked in. I often find colonies of Cherry shrimp happily living in my filter, feeding on the bacteria growing on the media and safely away from the fish. As long as they can’t get sucked into the impeller they should be OK

Alternatively use some form of air powered filtration, the most popular forms being an air-driven sponge filter or a make-your-own Hamburg Mat Filter. This basically consists of closing off a corner of your tank with a flat piece of fine pored foam and using some form of water pump or air lift to pull water across/through the foam before been returned to the main part of the aquarium.

No special steps are needed to get neocaridina to breed. if you can keep them alive and healthy they will breed.

Neocaridina dwarf shrimp usually spawn shortly after moulting, the female releasing pheromones into the water to indicate her readiness and exciting the males. A good sign with most species of Neocaridina that the female is approaching readiness is seeing a coloured area form at about 'shoulder' height. This comprises the immature eggs visible through the shrimp and usually called a saddle by shrimp keepers.

Dwarf shrimp mating takes place with the shrimp facing each other, the male putting his sperm on her genital opening.

As the eggs pass through this opening they are fertilised by the sperm and then placed along the female’s abdomen among her swimming legs (pleopods) where she will carry them until ready to hatch after about three weeks to a month.

How do you raise offspring?

Neocaridina shrimp show no parental care and babies are very vulnerable, being only a millimetre or so in size. If kept with fish it is very important to provide mosses and other places in which they can hide and feed.

Offspring must be kept in a mature aquarium. A newer one will not contain enough minute organisms on which young shrimp primarily feed and is a common reason why breeding attempts fail. As they grow the young will eat particles that break free of shrimp foods and will also graze on any algae.

Water quality should continue to be maintained, as should the temperature of their aquarium.

Which species are easiest to keep?

All Neocaridina are easy to keep. The easiest are probably wild type Cherry shrimp (Neocaridina heteropoda) and Neocaridina palmata.  However Snowball and Blue pearl shrimp are fairly easy and breed but can be more sensitive due to the inbreeding needed to fix their colour forms.

Why do they sometimes die for no reason?

The simple answer is that they don’t — we just don’t understand or find the reason why. There are, however, a few possibilities to consider if you have 'unexplained' deaths:

Old age: Neocaridina shrimp rarely live longer than 12 to 18 months, so if you buy full grown shrimp they may already be getting old.

Copper poisoning: Have you changed your plant fertiliser or dosing regime?  Perhaps you have added new plants, or used water from the hot tap during a water change?  Did your shrimp show signs of lethargy before dying?

Failed moulting: This is all too common, with shrimp starting to moult and then appearing to drop dead for no reason. Possible causes can be a lack of calcium or iodine in diet, so if this happens a lot consider adding foods containing these. Most crustacean and shrimp foods contain additional iodine and calcium, often in the form of seaweed for iodine.

Too high CO2 levels/not enough dissolved oxygen: Before they died, did your shrimp appear to spend much time near the surface or 'surfing' in the flow from your filter outlet? If so, consider increasing surface agitation/aeration, or if using pressurised CO2 check your gas levels. If too high, reduce how much you are injecting.

Reduction in water quality: Have you recently added more stock or cleaned out your filter? If so check your nitrite and ammonia levels as a small ammonia spike may have occurred and killed your shrimp.

Predation: If in with fish or larger predatory shrimp they may have fallen victim to predation or harassment. Being 'messed with' by bullying fish can lead to death.

Disease: Little is known and without microscopic examination a disease can be difficult to spot. As a general rule, however, if your shrimp are kept in good conditions you will rarely encounter any ailments.

This item first appeared in the July 2009 issue of Practical Fishkeeping magazine. It may not be reproduced without written permission.