We answer your most frequently asked questions about a group of marine fish that start life as females and change sex when they can.

Yes and no. Generally, all dwarf angels can be kept in reef aquariums and a tank filled with live rock is the best place for them in terms of foraging and shelter. However, we sometimes have to avoid adding certain inverts as they will prove too tempting for the angels which try and nibble them.

There will always be the odd rogue angel that nips other coral polyps, and conversely always one example never bothering anything. We can reduce the level of temptation though by not stocking the inverts listed above, or just going for hardy soft corals or small polyped (SPS) corals that don’t have much flesh on show and are therefore not seen as food.

Of the dwarf angels, Coral beauties are generally recognised as the best behaved, with Lemonpeel and Bicolor angels the least trustworthy. 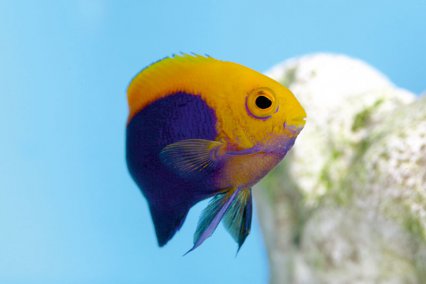 Can I have a tank stocked just with dwarf angels?

Fish-only tanks with large angelfish species are attempted by the very rich and, by minimising décor and territory but overcrowding the fish, you can achieve the similar controlled chaos as that of a Malawi cichlid tank.

A dwarf angelfish-only community tank has rarely if ever been created and there is probably a good reason for this.

Multiple tanks would be necessary for separating fish if fights did break out and, with an average price of £50 per fish and ten to 12 being necessary, this could prove to be a very expensive lesson in compatibility.

Can I keep them in pairs?

Many dwarf angels live in mated pairs in the wild and can also do so in the aquarium. PFK even used a 1m/39” tank with four Flame angels as part of a breeding project.

Dwarf angels are protogynous hermaphrodites, meaning that they all start life as females and can then change to male if the opportunity arises.

You will rarely see dwarf angels sold in pairs, though some specialist retailers will try to get fish to pair up from adding a group to a tank.

Pairing off your own fish at home isn’t easy unless they are introduced together. Introduce a new fish to a long-established specimen with a territory and it will most likely attack it, using its sharp gill spines to inflict a wound.

Some hobbyists have successfully introduced a small one to a large one, though success will always be more likely with a very large tank that has lots of places to hide and areas out of the line of sight.

Once you do manage to get a cohabiting pair, however, spawning is almost guaranteed.

What size of tank do they need in which to to thrive?

The bigger the better, as they can have more room to exercise, more rock surfaces to graze and, being territorial, more room to create a home and get away from other grazers like tangs, with which they compete for food. 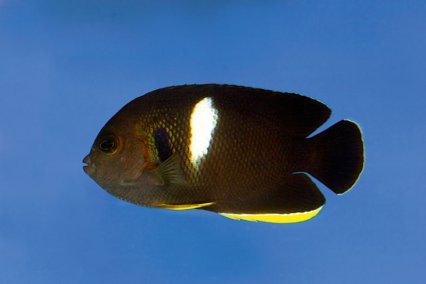 What other fish will they live with in harmony?

The key to mixing both freshwater or saltwater fish harmoniously is to vary colour, pattern and feeding requirements. A single dwarf angelfish will mix well with reef fish such as firefish, clowns, damsels, gobies and blennies.

Surgeonfish may fight with angels over food and territory, though this often subsides after a few days of introduction, though keep the patterns different to avoid rage. Don’t mix a bright yellow Lemonpeel angel and a Yellow tang, for example.

Dwarfs don’t predate small fish, so even tiny gobies should be safe in the same tank.

Do I need to be aware of any diseases they might catch?

Many angels of the genus Centropyge come into this country harbouring parasites. Observe any fish you might consider buying in the shop for ten minutes or so, watching its swimming and feeding pattern. Flicking and itching fish are certain to be carrying something and, if they do flick, leave well alone.

Some retailers will quarantine or use copper-based medications in their marine fish systems to knock out any parasites, although you too could quarantine when you get the fish home and medicate with copper or methylene blue before the fish is placed with others.

Once in the tank all diseases are much harder to treat because of the sensitivity of the corals and other invertebrates. 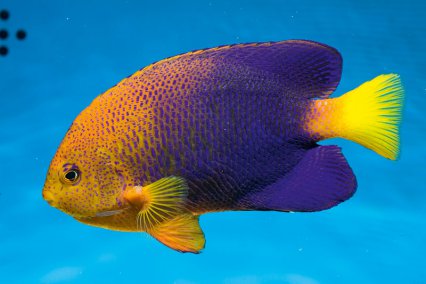 What is the biggest dwarf angel?

The largest species is the Japanese angelfish (Centropyge interruptus) pictured above, that reaches 15cm/6” in length. A very attractive fish, it looks like a large Coral beauty hybrid — though you won’t pick one purely by accident as prices are reputedly as high as £1,030 per fish.

Many other species like the Bicolor angel (Centropyge bicolor) can grow to 15cm/6” in length in the wild, but are much smaller in captivity. The cut-off point for any dwarf seems to be around 15cm and most belong to the genus Centropyge which includes all the popular species, like the Flame angel and Lemonpeel.

One of the next largest angels would be the Regal angelfish (Pygoplites diacanthus) which can reach 25cm/10”. 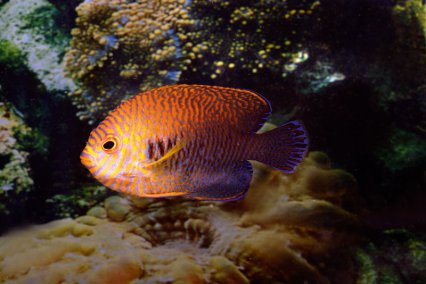 Dwarf angelfish are omnivores that do well on a mixed diet of frozen and dry foods. Feed a good brand of marine flake, along with frozen Mysis, Artemia and krill.

Nori can be fed, along with other green foods, though mature live rock should also be present and will itself produce small live foods and algae.

Make sure your angel is seen feeding in the shop before you take it home and be aware that some, like the Coral beauty, are easier to keep than others. Rarer fish, like the Potter’s angel (above) are considered more difficult.