Filefish: A bit of rough! They have skin like sandpaper and can be fascinating and entertaining masters of disguise. Dave Wolfenden spotlights the filefish.

One of the most overlooked groups of fish in the marine hobby has to be the filefish. Many believe them too sensitive to be maintained successfully and some species are definitely unsuitable for aquarium life. Yet several are worth considering, providing you know their requirements and are aware of potential pitfalls.

Filefish, also known as the leatherjackets, closely resemble triggers and puffers, with features common to both groups.

In fact, these fish are all in the same order,  belonging to the Tetraodontiformes.

The filefish family name Monacanthidae — meaning one spine — is derived from the prominent dorsal spine that’s used to wedge the fish into crevices, triggerfish style.

Filefish have an unusual scale morphology, in which setae (or spines) are present. These give the fishes’ skin a particularly rough texture, hence the name.

Filefish skin was reportedly once used as a substitute for sandpaper and if you’ve ever held one in your hands you’ll understand why. 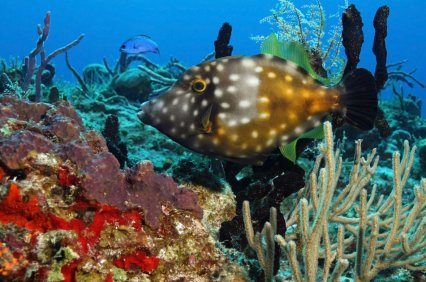 Filefish can be hardy, but choose specimens already allowed to settle after the stresses of transport. I’d always want to see one feeding before purchasing.

It can be difficult to initially tell if an animal is emaciated due to their characteristic laterally compressed body shape, but any with a noticeably pinched abdomen might spell trouble.

A period of quarantine should allow the fish to settle into long-term captive life and adapt to a variety of foods before being added to the main aquarium.

Health problems are not generally a major issue, although obviously the usual parasitic diseases may arise. The viral disease Lymphocystis is sometimes seen soon after introduction on newly acquired specimens, but this will clear up spontaneously if water quality and diet are optimal. 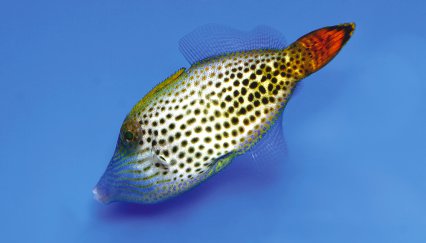 In terms of lifestyle, these fish tend to use stealth, crypsis, mimicry and masquerade to avoid detection and predation, so replicate their habitat as closely as possible. Lots of rockwork with plenty of crevices, nooks and crannies are ideal.

Are filefish reef safe? Bearing in mind that these are mainly opportunistic feeders on a variety of invertebrates, with some species specifically feeding just on coral polyps, they’re risky in reef aquaria.

On balance, a Fish Only With Live Rock (FOWLR) system is perfect for these fish. Tank mates should be non-aggressive, as overly boisterous species will not only harass filefish but may also out-compete them for food. That includes large angels, big puffers and large triggers. 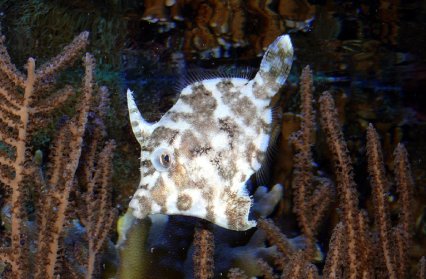 Feeding (picture above of Acreichthys tomentosus by Haplochromis, Creative Commons)

Most, but by no means all, species are easy to feed, thanks to their mainly catholic tastes. Omnivorous filefish will graze the biofilm of algae and invertebrates from the reef’s rock, as well as consuming sponges, sea squirts, anemones, gorgonians, worms and molluscs, plus other fare.

Variety in captivity is therefore important and regular two, three or more daily feeds are recommended. Live rock will go some way to stimulating natural foraging behaviour and providing food items, and this should be augmented with fresh and frozen feeds. Mysis, mussel meat, Artemia, it’s worth trying all of them.

However, there are exceptions — specifically the Harlequin filefish (Oxymonacanthus longirostris) — which, along with others of the genus, is an obligate corallivore and unsuited to life in the aquarium. 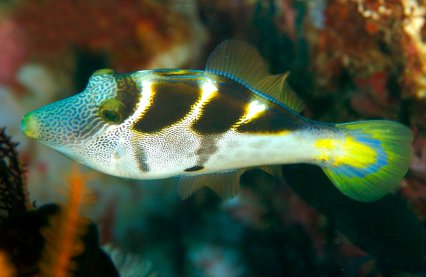 Choose from six of the best…

The Blacksaddled leatherjacket (Paraluteres prionurus) — pictured above — from the Indo-Pacific and which grows to 10cm/4” is fascinating. It mimics the toxic Valentini puffer (Canthigaster valentini) — pictured below — hence the alternative name of False puffer. 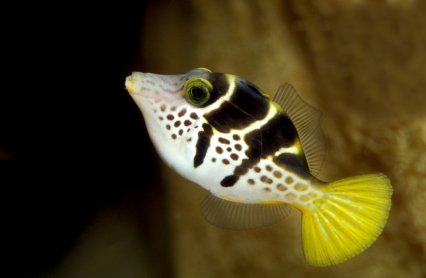 P. prionurusis among the toughest filefish and its mimicry is really interesting. I’ve kept both mimic and true puffer together in a public aquarium and this can work well, provided there’s enough room for both of them.

The Tasselled filefish (Chaetodermis penicilligerus) — pictured at the top of the page — comes from the Indo-Pacific and looks bizarre. Growing to 20cm/8” in captivity, possibly more, this cryptic filefish sports weedy outgrowths over the body with disruptive coloration serving to disguise the animal. Despite its delicate looks, this is a hardy species benefitting from regular feeds. 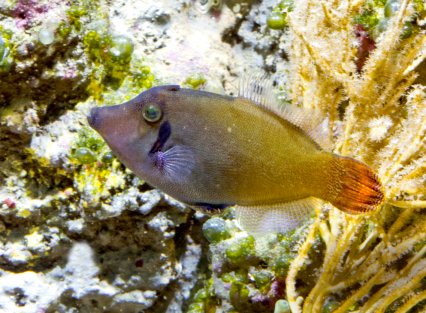 The Hawaiian orange-tail filefish (Pervagor spilosoma) is recommended only for experienced aquarists. Hailing from the Eastern Pacific, especially around Hawaii, this occasionally-imported species can be delicate and difficult to get feeding. However, once trained to accept prepared foods, it should do well in the aquarium.

Coloration is interesting, with a mottled body and red fan-shaped tail. Expect adults to reach 15cm/6” in the aquarium. 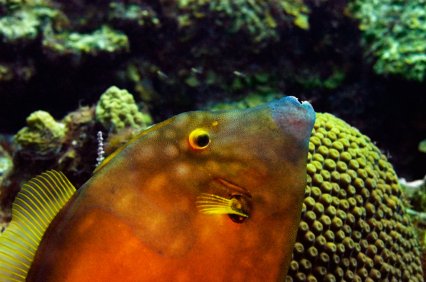 From the same genus, it’s not hard to see why the Flame filefish (P. melanocephalus) gets its common name. Having a length of up to 15cm/6” and originating from the Indo-West Pacific, this species sports a black head, but a bright red rear half. This is another species for seasoned aquarists, as feeding can be problematic. 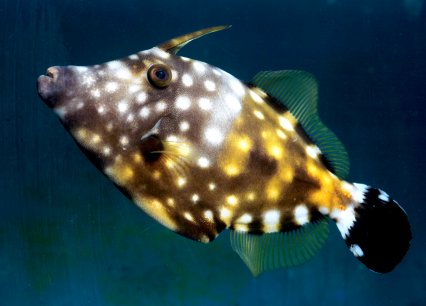 The Clown filefish (Cantherhines macrocerus) from the Western Atlantic earns its name thanks to its bizarre coloration. Growing to 40cm/16”, the fish’s front half tends to be black, while its rear is a deep golden yellow. White spots adorn the body and it’s easy to see why this species ranks among the most expensive of filefish.

Sexing is possible among adults, with males possessing more prominent spines at the base of the tail, along with an orange patch just in front of these spines. 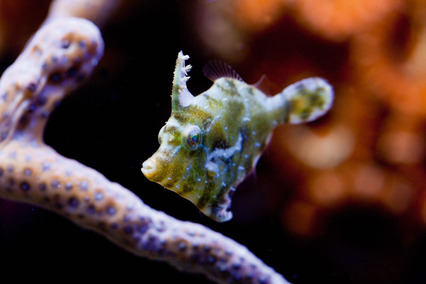 The so-called Aiptasia-eating or Bristletail filefish (Acreichthys tomentosus) from the Indo-West Pacific is now top of many wish lists, thanks to its wonderful habit of munching on Aiptasia and Majano anemones.

This new kid on the block, which grows to 12cm/4.8”, is a cryptic species, ranging from brown to green, allowing it to blend with the vegetation of its environment. It’s not stunning by any stretch, but its unusual appearance compensates for its drab coloration.

They tend to more commonly frequent seagrass and mud habitats — not traditionally regions exploited by ornamental fish collectors. Recently, however, collectors have tried to capitalise on demand and it’s now pretty widely available.

To sex this species, look for a patch of prominent setae around the caudal peduncle (tail base) of an adult — the presence of which identifies a male.

However, beware of imitations as several species with a similar appearance appear frequently sold under the same common name, although it’s hit and miss how effective these misidentified specimens are at anemone control.

Despite the name, even true Aiptasia-eating filefish don’t feed exclusively on pest anemones. So be cautious as it’s possible that any specimen can feed on other polyps – including your prized SPS corals. 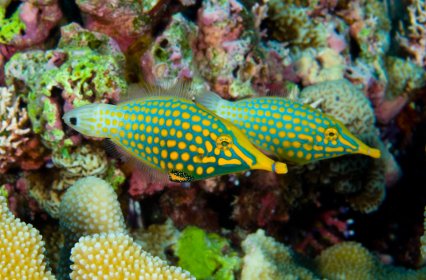 The Harlequin or Orange-spotted filefish (Oxymonacanthus longirostris) from the Indo-Pacific is truly stunning, displaying a psychedelic livery of orange spots on a bright green background. It’s also a specialist feeder, being an obligate corallivore feeding exclusively in the wild on SPS coral polyps — specifically Acropora.

This diet means this species is difficult to maintain long-term and I suspect that dismal survival rates are the norm.

Although some have maintained Harlequins by providing adequate Acropora, or by weaning them on to substitute feeds — and they have even been captive bred — success stories are rare.

Fair play to those keeping them, but this 12cm/ 4.7” filefish is best left, if only because of its poor captive survivability.

There may be additional issues too. Populations, already under pressure from coral bleaching, may be nudged closer to local extinction by collection for the trade.

Predators are fooled by coral disguise

O. longirostris’ coloration is believed to be used to mimic the appearance of Acropora branches among which it lives.

It feeds diurnally (during the day), but at night it has been seen head down, wedged in place with its dorsal spine.

The fish’s behaviour, spotted coloration and even the pale tip of the caudal fin, appear adaptations in resembling its coral habitat. Biologists refer to this as masquerade — looking like another organism to misdirect potential predators.

Can I breed any filefish species?

It’s possible to maintain a pair of filefish if you have the room.

Many species will exhibit sexual dimorphism and/or dichromatism as adults — in other words, male and female displaying varying size or morphology (dimorphism) or coloration (dichromatism).

Juveniles, however, are generally monomorphic, that means having a similar appearance between the sexes.

Filefish are egg depositors too, which adds to the ease with which you can collect the fry.

Add to this the fact that newly-hatched filefish fry are of a relatively large size — making Artemia nauplii a suitable first food for them.

A good first species to try out would be Aiptasia-eating filefish (Acreichthys tomentosus), which has already been successfully raised by several breeders in captivity.

The rough skin of filefish, with its prickly setae, can become entangled in fine-mesh nets, which can lead to tangling and potential trauma when handling. It’s less risky to use a net simply for manoeuvring the fish, then using a beaker or bucket to capture it. 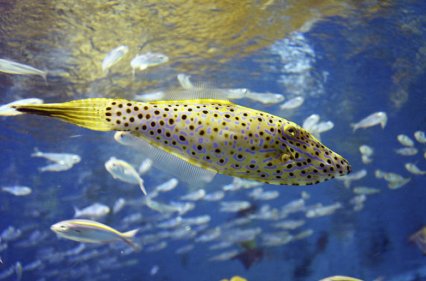 Many filefish are small, but…

Despite the diminutive size of many filefish, some species can attain large adult sizes, so research any potential purchase and ensure positive ID.

The Scribbled filefish (Aluterus scriptus) is found in all tropical oceans and is the largest of the family. Growing to just over 1m/3.3’ in length, it’s an awesome sight and definitely best left to public aquariums.