Extract from ‘Reading Between the Spines’ by Oliver Lucanus 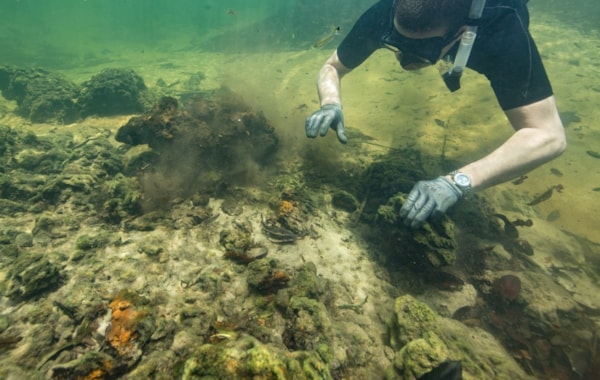 Oliver Lucanus is a fishkeeper’s fishkeeper. He’s the kind of rugged, hands-on aquarist we all dream of being from the comfort of our fish houses. While most of us harvest our information from books, or peruse forums and Facebook groups, Oliver goes to the Amazon, throws on a snorkel and starts flipping rocks. We see fish in tanks and on screens, he sees fish in rivers.

The following is an extract from Oliver’s piece on doradid catfish, which is my ‘feature of the month’ for the January issue. He introduces new species I never even knew existed, accompanied by images of fish I’m now desperate to see in person. If you’re anything like me, the chances are that this will set the ball rolling for several biotope projects through 2020.

“There are over three thousand described catfish species spread across 36 families that we know of at this time. But in aquaria this diversity is mostly represented by some seven hundred species of Loricardiae and roughly two hundred Callichthydae, with just about every other catfish family confined to the sidelines.

“My first catfish was a Bristlenose, Ancistrus sp. It served a purpose, cleaning the tank for cichlids and tetras. Pterogoplichthys, Hypostomus or Ancistrus are, historically speaking, the first catfish for just about everyone.

“The second catfish is often much more interesting; for small community fish fans it’ll usually be a Corydoras species. But for those of us with larger fish it is often one of the robust doradids; the Spotted talking catfish, Agamyxis pectinifrons, or a secretive Humbug catfish, Platydoras armatulus.

“Each carries a robotic looking and inelegant body, covered in thick scutes and jagged spines — the indestructible nature of these catfish is something new aquarists love. They are fascinating, hardy and incredibly cryptic fishes. Indeed, you might not see them for months at a time, though in reality they thrive in an aquarium.

“Even more surprising is that the Doradidae family contains over 100 species in 33 genera, only a tiny handful of which are seen in the hobby, even though they do not eat plants or their tank mates, and are extremely hardy towards disease and a variety of water conditions.

“To keep things easy, I shall divide the doradids into four groups. These groups roughly conform to the genetic relationships of the species, but not entirely. They are widespread in most habitats in South America, but seen only fleetingly in nature, and even more rarely in the hobby…”

The full 1650-word article can be found in the January 2020 issue of Practical Fishkeeping, out on November 27, 2019. If you don't already, subscribe to our digital magazine HERE.